The USS Mazama was an ammunition ship that belonged to the Lassen class. It was named after Mount Mazama which belonged to the Cascade Range located in Oregon; a collapsed volcano where nowadays lies Crater Lake. This ship was laid down in 1942 and it was launched a year later. The USS Mazama had an overall service of 16 years, it was commissioned three times and it was finally decommissioned in 1970. Some of the operations where this vessel was deployed are the Pacific Operations at Guama, the Campaign in Philippine, Tinian, Saipan, and Okinawa. It was awarded 5 battle stars for its service. 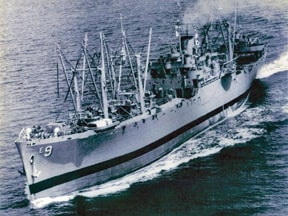 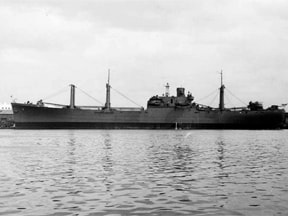 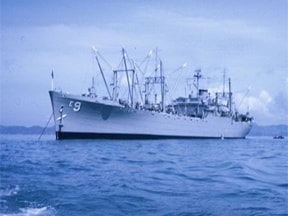 History of the USS Mazama (AE-9)

The USS Mazama was laid down by the Tampa Shipbuilding Co. in 1942. The ship's sponsor was Mrs. Edward V. Rickenbacker. USS Mazama (AE-9) was launched on the 15th of August 1943. The vessel's first commander was Comdr: P. V. R. Harris.

The USS Mazama participated in several military operations during World War II, between 1944 and 1945. The first mission was in 1944 when she departed from Boston for the Pacific, heading towards Majuro. It arrived at the destination on the 4th of June and it started to provide ammunition to the ships at sea and to the port. Afterwards, the USS Mazama headed to Saipan where it arrived on June 21st, after the Battle of the Philippine Sea was over. As part of the Saipan-Tinian operations, the ship continued to supply ammunition to the units of the 5th Fleet. In August, the vessel returned home for a brief period and it came back to the conflict area in September.

In October, the USS Mazama was deployed in the Leyte Gulf for a period. Despite the fervent air activity in this area, the ship provided armament for the units of the 7th and 3rd Fleets, witnessing the battles of Samar and Surigao Strait.

A month later, the USS Mazama sailed for the Ulithi Islands and the Kossol Roads. In December, the vessel needed more ammunition, so it headed to Espiritu Santo for replenishment and turned back to the Ulithi Islands in January 1945. During the same month, on the 12th of January, there was an explosion on board which caused critical damages to the vessel and lead to the death of one crewman, and severe injuries to other seven members. The USS Mazama was temporarily repaired by 6 March and in June she returned to the Philippines, carrying 5,000 tons of ammunition. The vessel was deployed in San Pedro Bay until the end of the war.

On 23 November, USS Mazama arrived at Seattle where she would be deactivated. Then, it went to San Diego to be decommissioned on the 3rd of August.

From 1952, the ship started to operate off the East Coast after it had been assigned to the Service Force. USS Mazama served the Atlantic Fleet for five years; during this period, she took part in the conflicts related to the Suez Canal crisis that involved Israel, the UK, Egypt, and France. Afterwards, the vessel returned to the East Coast and it was decommissioned on the 10th of June 1957, in Texas.

However, in 1961, the USS Mazama was called back to duty in order to take part in the exercises organized in the Atlantic and in the Caribbean Sea. Then, it was involved in the operations organized during the Cuban Quarantine in 1962 and in 1964 it went once more to the Mediterranean where it took part in the conflicts between Greece and Cyprus. Once it returned back home, in 1965, USS Mazama started to operate in Mayport, Davisville, and Rhode Island. In 1966, the vessel was deployed off the coast of Vietnam helping the 7th Fleet's units. By 20 December, the ship had completed its round the world journey and in 1967 it started to serve the 2nd Fleet. In 1969, the USS Mazama went on a cruise in the Western Pacific. When it returned home, it was decommissioned for the last time in 1970, at Davisville.

The dangerous effects of asbestos exposure were unknown to the public until the '70s. By that time, the US Navy had been using this toxic mineral virtually in all its ships. There is evidence that the Navy used over 300 asbestos-containing products on their vessels. Pursuing asbestos-containing materials was a common decision back in those times because these products were quite affordable and very efficient. Asbestos was a great insulator, it was resistant to chemical damage and it had an impressive strength. It was one of the most common insulation, fireproofing and construction materials. Most of the Navy vessels built prior to the 80's contained asbestos and the most concerning fact is that the dangerous mineral was present all over the ship. Therefore, no one was safe, whether they worked on the deck or in the boiler room.

Asbestos exposure was inevitable for the crewmen who used to spend months aboard the Navy ships. Asbestos is nowadays a proven carcinogen and some of the most frequent diseases linked to this toxic mineral are mesothelioma, asbestosis, pleural plaques, and lung cancer. These conditions are particularly hard to identify because they have a long latency period, meaning that someone who was exposed to asbestos decades ago can be diagnosed today. The advantage for those who have recently found out that they suffer from an asbestos-related disease is that they can access monetary compensation. The VA grants financial and medical support to veterans whose exposure occurred during military service. To access this award, you need to file a claim which will be carefully analyzed by the VA who will then decide if you are eligible.

The USS Mazama (AE-9) served as an ammunition ship that was used to deliver essential supplies to the combatant vessels at the sea. Ammunition ships, as the name suggests, carried more of ammunition and missiles but also transported food, repair parts, and fuel. As a result, ammunition ships built prior to the 1980s were constructed using asbestos-containing materials mostly in boiler spaces and engine room due to the dangers of volatile cargo. In addition to the Navy veterans who served aboard the USS Mazama (AE-9), countless service members and shipyard workers at Philadelphia Naval Shipyard who were involved in the operation, repair, and maintenance of asbestos-containing parts on the USS Mazama (AE-9) were at high risk of exposure to the cancer-causing asbestos dust.

To enhance your chances of getting compensation, it's recommended that you discuss your case with a lawyer who has proven experience in asbestos litigation.

Have You Been Exposed to Asbestos on the USS Mazama (AE-9)?

"I was stationed aboard the USS Mazama from February 1964 to September 1969 and was on the ship during the 2 year period where we stripped and installed asbestos insulation around the pipings." - Arsenio M.N.

Our purpose is to help you learn more about the risks of asbestos exposure and how extensively this mineral has been used in the Navy. Moreover, we can also help you get in touch with a large number of veterans, including your former shipmates. Contact us at 760.621.6147 for more information.