The USS McMorris was a Claud Jones-class destroyer escort. These types of ships were an alternative version of the earlier models of the Dealey-class, the major difference between them being that the Claud-Jones vessels ran on Diesel fuel. Unlike their predecessors, the USS McMorris had diminished firepower and artillery. Although these kinds of ships were the result of a wartime high demand production, the USS McMorris distinguished itself during the Vietnam War earning an Armed Forces Expeditionary Medal, a Vietnam Service Medal and a Republic of Vietnam Campaign Medal. 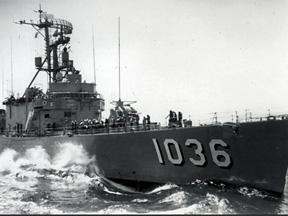 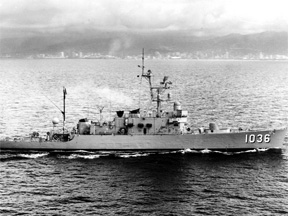 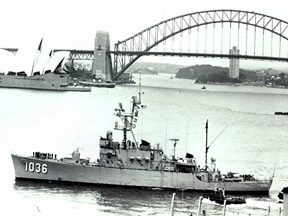 The USS McMorris was built by the American Ship Building Company in Lorain, Ohio. Mrs. McMorris sponsored the vessel and Lieutenant Commander Martin Zenni was assigned commanding officer when the ship was placed in commission in March 1960 at Charleston in South Carolina. After completing shakedown off the East Coast, the ship departed for the Naval Station San Diego in order to report to Cruiser-Destroyer Force, Pacific Fleet. In April 1961, the McMorris was on a six-month deployment in the Far East waters. Simultaneously, the ship was part of the anti-submarine warfare group within the 7th Fleet and also served as a goodwill ship while making port calls in Japan.

In May 1965, the ship left Pearl Harbor, its newly assigned homeport, for operations in the Vietnam area. The McMorris was given the role of the flagship of Commander Escort Squadron 5 along which it took part in Operation Market Time, mainly in missions involving search and surveillance, becoming the first destroyer escort that participated in naval gunfire in the combat zone off Vietnam. The ship went back to Hawaii later that year in August when it was commanded to operate with Task Force 92, and shortly after it was assigned the flagship of CortRon 7 for when convoy missions were to take place. Two more deployments occupied the rest of the year for the McMorris, one to the area of the North Pacific and one to the area of the South Pacific.

While performing anti-submarine training off the coast of Hawaii in January 1967, the McMorris and a gasoline tanker crashed into one another causing all the communication systems and the propulsion to stop functioning. The incident also led to the injury of seven people aboard the McMorris and two deaths. The vessel entered the Pearl Harbor Naval Shipyard to receive extensive repairs.

All the ships from the Claud Jones class, which were a total of four, formed the CortRon 1 and left on deployment to the Western Pacific between 1960 and 1971.

In 1971, the vessel underwent a planned overhaul at the Pearl Harbor Naval Shipyard in which a satellite communication antenna was installed on board and more deck spaces were added.

The McMorris was placed out of commission at Pearl Harbor in December 1974. Because of their small size and reduced armament, the ships pertaining to the Claud Jones-class were cataloged by the Navy as not competent enough for warfare and, therefore, the entire class was retired after 15 years of action. The four Claud Jones-class vessels were sold to the Navy in Indonesia in 1974. The McMorris continued to operate in Indonesian waters until it was finally decommissioned in January 2003.

Both commercial and military ships constructed in the first part of the 20th century contained large amounts of asbestos, which was a praised building material at the time for displaying properties such as inertia to high temperatures or to an array of chemicals and materials.

As the Navy took notice of the fire retardant qualities of asbestos, they essentially coated their vessels in the material. As a result, the toxic fibers were actively used in shipbuilding and in the construction of equipment meant for military sea operations until its usage was regulated in the United States in the 1970s as its damaging effects on the human health were being confirmed by medical records following the progress of those that were discovered to have had the particles in their organism.

Asbestos-containing items on ships easily deteriorated because of various reasons ranging from minor maintenance and repair work to disturbances caused by actions during times of warfare. Once they become airborne, the toxic fibers put those in their vicinity at risk as they were easy to inhale, especially because nobody took any precautions when working around asbestos since the dangers about the mineral were yet unknown.

Have You Been Exposed to Asbestos on the USS McMorris (DE-1036)?

We can help you understand how asbestos exposure occurred on the USS McMorris (DE-1036) during the time of your service for the U.S. Navy. We can also assist you in finding former colleagues. Call us at 760-621-6147, if you want to learn more.