The USS Merrick (AKA-97) was an Andromeda-class attack cargo vessel. The ship would have to carry servicemen and artillery, but it would also be required, since its capabilities permitted it, to join in combat in support of other warships.

In the entire history of the U.S. Navy, the USS Merrick was one of the most decorated cargo ships, including medals for its service in World War II, the Korean War and the Vietnam War.

Technical Features of the USS Merrick (AKA-97) 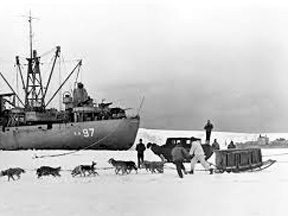 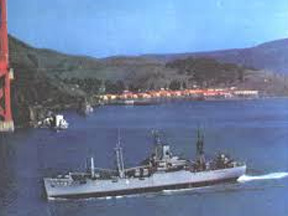 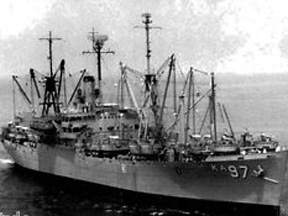 History of the USS Merrick (AKA-97)

The USS Merrick was built by Federal Shipbuilding and Drydock Company in Kearny, New Jersey. Mrs. Francis N. Van Riper sponsored the ship and at the time of its commissioning, in May 1945, Lieutenant Commander Walter E. Reed was assigned as commanding officer.

By May 1945, the Merrick had departed Norfolk in order to perform exercises in the Pearl Harbor area. At the same time, the vessel did transportation duty with cargo and troopship between the Marshalls and the New Hebrides, an operation that lasted almost until the end of World War II. Next, the ship was ordered to embark troopship from Hawaii and the Philippines to carry them to Japan. Once there, the Merrick took on board veterans that it transported to Norfolk, where it arrived on 3 December 1945.

In October 1946, the ship joined Task Group 68.1 in preparation for Operation Highjump, which had as a primary focus the establishing of Little America IV, a base concerned with Antarctic exploration. In January 1947, the fleet arrived at Bay of Whales where they ended up setting Little America IV. Even if it was successful, the deployment turned out to too much to handle by many of the units from the Task Group. For instance, ice was a force to be reckoned with causing some ships in charge of communications and supplies to have to be dismissed from the mission by the time it was February. The Merrick was also damaged by ice, specifically its rudder. The ship underwent only minor reparations that would allow it to have a safe trip back to California. Still, all the way there the Merrick had troublesome boilers and it experienced fuel shortages. When it finally arrived at San Francisco Bay, the ship was placed out of active duty and into the National Defense Reserve Fleet.

In January 1952, the Merrick was back to active duty in order to be able to participate in the Korean War. By July 1952, the ship was commanded to Yokosuka, Japan for transportation duty. In October 1952, the Merrick was back in California for an overhaul followed by refresher exercises. In July 1953, the Merrick sailed for the Far East once more. When Operation Big Switch began in August 1953, the ship was ordered to do service as a part of it. As a result, in the two months in which it contributed to it, the Merrick took on board over 6,400 prisoners from Cheju-do and Koje-do and carry them to Inchon. Until 1963, the ship operated with the 7th Fleet sailing in western Pacific waters, with two notable exceptions: the years of 1955 and 1957 when it was deployed to the Arctic.

In 1963, the Merrick sailed the waters of the South China Sea for the first time and then it continued to do so each year until 1969. When the ship was not off in a deployment, it would have to maintain its readiness and so it was constantly engaged in overhauls and in training exercises off the west coast. For its service in Vietnam, the Merrick was awarded seven campaign stars. In September 1969, the ship was placed out of commission and sold to be scrapped in Taiwan in 1980.

Asbestos Risks on the USS Merrick (AKA-97)

In the first half of the 20th century, the United States exploited asbestos, the so-called 'miracle' mineral, for almost all lines of work; from commercial to industrial and the military. The reason for the high appreciation of asbestos was its undeniable versatility. The mineral has a high resistance to intense heat, it is durable and flexible at the same time. Such qualities would explain its heavy usage by the U.S. Navy, for instance, since shipyards were interested in making the vessels as safe as possible for at sea missions. Consequently, the people that had jobs related to ship repairing and ship construction should take into account the possibility that they have been exposed to the toxic mineral for serious periods of time.

Personnel that was in charge of various stages of the ship making such as insulating, electrical work, repairing, painting and plumbing among other tasks would be at risk of disturbing the asbestos contained by the equipment they had to focus on.

By causing the fibers to become airborne, the workers would create hazardous environments, endangering their well-being not just in the moment, but also long into the future. When inhaled, the asbestos fibers cement themselves to the thin lining of the lungs, abdomen or heart irritating the organs and potentially, at the end of a long latency period, cause the development of a cancerous tumor.

Have You Been Exposed to Asbestos on the USS Merrick (AKA-97)?

We can help you figure out how asbestos influenced your time on the ship. If you want, we can put you in touch with your former shipmates. For more information, call us at 760.621.6147.