The USS Navarro (APA-215) was a Haskell-class Attack Transport. The name of the ship was inspired by the county of Navarro, Texas. The vessel was a VC2-S-AP5 Victory ship type which was especially popular during World War II.

Beside active participation in campaigns in World War II, the USS Navarro also operated in the Vietnam War. Its efforts for the former were rewarded with one battle star, and for contributions it brought to the latter, the ship received 4 campaign stars and a unit commendation. 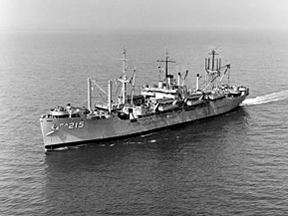 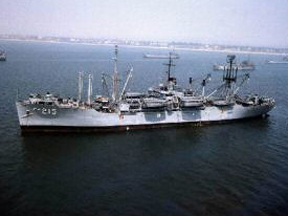 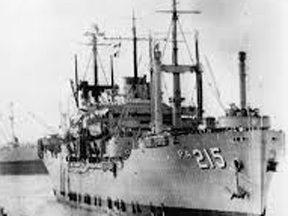 The USS Navarro was built by Permanente Metals Corporation in Richmond, California. The ship, sponsored by Mrs. Anne Jones, was commissioned on 15 November 1944 with Commander Fred E. Angrick in command. The Navarro began its shakedown on the first day of December, and the preparations consisted of a cruise to San Pedro that lasted 12 days. Already, on 16 December 1944, the ship started amphibious training at San Diego for a week. At the beginning of 1945, Navarro steamed to Guadalcanal where it saw through offloading cargo and troops. The ship then changed locations to Russell Islands. There, Navarro took part in a rehearsal preparing the invasion of Okinawa. On Easter day 1945, the US finally invaded the island. The screening and the air cover were so well put together that Navarro only had to fire on hostile air targets 3 times. The ship spent 6 days around the island and then sailed to Guam. In April, the vessel left for the United States by taking the route of Pearl Harbor. It arrived in San Francisco in May. Afterward, the ship had orders to transport troops and equipment to Seattle. From Seattle, it left for Okinawa where it arrived in July and it began offloading. By August, the Navarro departed for Yokohama, transporting troops. This action was followed by its participation in Operation Magic Carpet, which assigned the ship with bringing American troops back to the United States.

On 15 March 1946, the Navarro was in the process of its first decommissioning. The ship was stationed at the Pacific Reserve Fleet at Stockton, California, and it lingered there until the Korean War prompted it into active duty again. Therefore, a second commissioning occurred on 2 December 1950, with Captain R. E. Westbrook in command. The Navarro quickly joined the Amphibious Force in the Atlantic Fleet. The following 4 years the ship was on duty engaged in Mediterranean and Caribbean operations. In 1955, the Navarro finally returned to the Pacific Fleet. Throughout the summer of 1958, the ship participated in a few atomic tests at Eniwetok.

In January 1962, the Navarro took part in amphibious exercises for the president to witness. Shortly after the demonstrations, it joined the Seventh Fleet in the Western Pacific for 7 months. When it became obvious that the Laotian crisis would take a turn for the worse, the vessel received orders from the president to head over to Indochina in May. Thus, the Navarro carried 1,800 Marines to the designated place of operations. In 1964, the Navarro underwent a complex overhaul at Pacific Ship Repair Shipyard, San Francisco. After the overhaul was completed, the ship took part in an exercise with the codename "Silver Lance" on 9 March 1965, just off the Southern California coast. In 1966, from January to February, the Navarro was part of a unit that provided support for combat zones and it transported 1,200 Marines to Southern Quang Ngai Province in the Republic of Vietnam. These actions were part of Operation Double Eagle. The operation turned out to be the largest amphibious operation ever sustained until that moment since the Korean War, with more than 5,000 Marines and sailors in total engaged on duty.

The Navarro crew was rewarded for their actions during the Vietnam War with the Meritorious Unit Commendation. The ship was engaged in quite heroic rescue operations. In one of the circumstances, for instance, the crew saved 43 seamen from a British ship that had been hit by typhoon Emma and had been stranded in the South China Sea.

On 1 January 1969, the vessel began its second decommissioning process in San Diego. The Navarro, then, was transferred to the United States Maritime Administration and it was taken off the Naval Vessel Register in December 1976. In February 1982, the ship was moved to Farrell Lines, Inc., and from there it was sold to C.W. Enterprise Investments, Inc. The ship was to be scrapped in the following 24 months.

As data indicates nowadays, the Navy used asbestos, a highly toxic mineral, in most of its equipment. No other branch of the US armed forces comes close to the large amount of asbestos that was incorporated into their mechanisms and appliances. The grim consequence of those choices is that people that have served in the Navy in any way are at a greater risk than those in other fields of suffering from an asbestos-related disease at some point in their lives.

There are perfectly legitimate reasons behind that which peaked the interest of the US Navy, more so than that of other branches of the military, where asbestos was concerned. The fibrous mineral was discovered to be an apt fire retardant, and in a field with people going about their duties while packed on a ship or in a submarine, such a physical property is invaluable. However, the very design of ships and submarines makes large parts of them hermetically sealed, which means that fresh air would be difficult to come by and so those working in tight spaces were inevitably inhaling asbestos dust and touching apparatus that contained it, such as pipes, cables, valves and even sections of the walls.

Asbestos exposure is nothing to be brushed off since it causes serious life-threatening illnesses, most prevalent being mesothelioma, lung cancer and asbestosis. If you know somebody that is affected by asbestos exposure, you can discuss the circumstances with a professional and legally seek compensation.

Have You Been Exposed to Asbestos on USS Navarro (APA-215)?

We can guide you in learning more about asbestos exposure, and particularly, to what degree it was utilized in the Navy. We can also help you get in contact with your former shipmates. For more information, call us at 760.621.6147.