The USS Nemasket (AOG-10) was a Patapsco-class gasoline tanker. This type of vessel was designed with the intention of transporting gasoline to warships on deployment, but also to Navy bases located at sea.

The USS Nemasket conducted operations during World War II and also during the Korean War. As a reward for carrying out the dangerous task of moving between battle zones with massive quantities of fuel on board, the ship received the World War II Victory Medal, the Korean Service Medal and the Republic of Korean War Service Medal, among other honors. 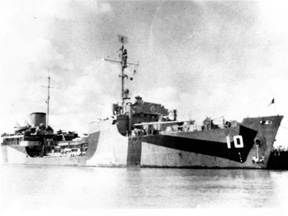 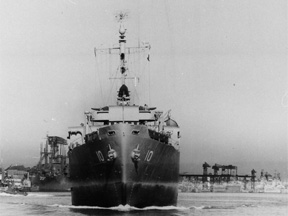 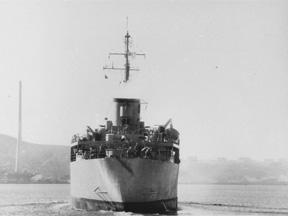 History of the USS Nemasket (AOG-10)

The USS Nemasket was built by Cargill Inc. in Savage, Minnesota. The vessel was christened by Mrs. Rebecca Hanson and had Lieutenant Commander Gillespie G. Boyd commanding at its commissioning in June 1944 in New Orleans, Louisiana.

In July 1944, the Nemasket sailed to Aruba, an island that is part of the Kingdom of the Netherlands, in order to load gasoline. In August it arrived at Pearl Harbor from where it began the transportation of petroleum to islands in the Pacific. At the same time, the Nemasket was constantly increasing its fuel supplies from both merchant tankers and Navy oilers so that it could be ready to distribute it to other ships operating nearby.

The ship was also tasked with carrying aviation gasoline, intended to propel aircraft, to locations in the Palau Islands, like Angaur and Peleliu, for instance, between December 1944 and January 1945. The Nemasket then sailed to Eniwetok to provide fuel for the units of the fleet that was in full preparation for the attack on Iwo Jima. In just twenty days, more than 200 vessels have received fuel from the Nemasket.

In April 1945, the ship sailed to Kerama Retto where it was under kamikaze attacks for three months, i.e. for as long as its stay in the area lasted.

When the tension declined, the ship continued to remain around the Leyte area serving alongside the Pacific Service Force. By September, the Nemasket was ordered to Shanghai, China where it was on duty until May 1947. The following month, in June, the vessel was assigned to the Service Division 51, Service Force, Pacific with delivery and transportation operations. The ship continued to be engaged in transportation operations during the Korean War and then throughout the 1950s.

In September 1959, the vessel was decommissioned and placed in reserve, where it remained until June 1971, when it entered the Suisun Bay Reserve Fleet. While there, the Nemasket operated under the designation FB-64 as a fleet utility carrier. However, records mention that by June 2006, the vessel had been scrapped completely.

Before the late 1970s, all Navy ships were built with materials embedded with asbestos. The mineral was so popular in the construction industry that it was mined in large quantities all across the United States and used intensively whether commercially or by the armed forces as its wide availability made it affordable for the largest part of the manufacturers of the time.

The U.S. Navy took a particular interest in asbestos-containing materials as the natural properties of the mineral increased their durability and also decreased their risk for combustion, as asbestos is fire retardant. In wanting to keep those on board as safe as possible, the Navy ordered for asbestos to not only be a part of the infrastructure of the vessel but to also be used as insulation around all the wiring, around the pipping, as well as around valves, pumps and gaskets.

It is estimated that hundreds of tools and pieces of equipment on board contained the mineral in some percentage and while it did not pose any threats while it was kept intact, once the asbestos was disturbed in some way, most commonly during maintenance or repair work, it became airborne and it was easy for personnel to inhale it.

The toxic fibers cement themselves in the thin lining of the lungs, of the heart or of the abdomen and cause an irritation that over the years might develop into cancerous diseases that only show symptoms after they have already reached an advanced stage, decreasing the chances for receiving treatment that will make any significant difference.

Have You Been Exposed to Asbestos on the USS Nemasket (AOG-10)?

If you are a Navy veteran that served on the USS Nemasket and your health has been affected by a condition provoked by asbestos, it is possible that the time you spent in the Navy caused your suffering. To learn more, call us at 760-621-6147.