The USS Nespelen (AOG-55) was a Patapsco-class gasoline tanker ship. By design, the vessel was meant to be in charge of the safe transportation of large amounts of oil fuels, but it also carried food and other types of supplies when it was necessary.

The USS Nespelen mainly served during World War II having been awarded a World War II Victory Medal and an Armed Forces Expeditionary Medal for its involvement in operations off Cuba, among other awards. 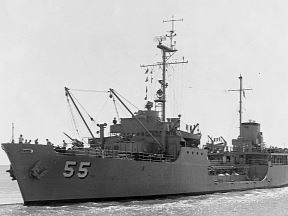 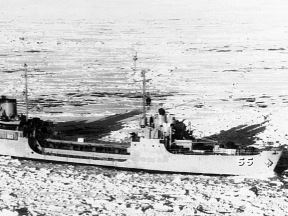 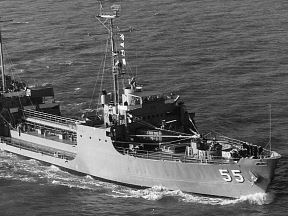 History of the USS Nespelen (AOG-55)

The USS Nespelen was built at Cargill, Inc. in Minnesota, having Lieutenant Thomas W. Purcell in command on its commissioning day on 9 August 1945. The ship completed shakedown and then was immediately ordered to Cuba, docking at Guantanamo Bay in September 1945 to unload its fuel.

The vessel kept sailing the waters off Cuba alternating between Guantanamo Bay and Havana until 11 November. By 22 November, the Nespelen made a trip to Texas in order to load more fuel with which it further supplied the Guantanamo Bay base. The ship entered a repair period at Boston in December 1945 where it had to be dry-docked for renovations to be completed.

The Nespelen circulated around the Newfoundland region until February 1946 when it was ordered to deliver diesel oil to the base in Bermuda. In November 1952, the ship had to report to the 6th Fleet as it was sailing from one Mediterranean port to another, its most frequent visits having been to places such as Italy and France. In April 1953, the Nespelen ended its tour in the Mediterranean waters and it headed back to the United States.

However, the following year, in 1954, the ship was to return to the Mediterranean adding even more spots to its port call duty list. By January 1955, the Nespelen steamed to Gibraltar in order to assist the forces of the 6th Fleet once again. During the winter period of 1955 and 1956, the vessel took part in Operation Deep Freeze, which was an expedition concerned with gathering more data from the region of Antarctica.

In the following years, the Nespelen continued to be transporting fuel from the Caribbean and from the East Coast to the bases set in the northern Atlantic area, while occasionally being deployed in the Mediterranean to serve along the units of the 6th Fleet.

The Nespelen was decommissioned in July 1975 and the following year it was sold for scrapping.

The largest part of the 20th century saw the rapid rise of asbestos, a fibrous mineral that was heavily used by manufacturers particularly in industries related to construction. The explanation behind such a choice was the capacity of the fibers to add strength to the compounds they were added to, increasing their durability.

Another praised quality of asbestos is its resistance to high temperature, making it an outstanding fireproofing material. Such characteristics were taken into consideration by officials of the United States Navy when they requested for massive amounts of the fibers to be used in shipbuilding and in insulating the vessels.

In this way, asbestos was basically everywhere on the ship, yet the exposure was especially serious in the cases of those working in narrow spaces, which were the rooms below the deck, such as the engine and boiler rooms, coated with asbestos-containing materials since the risk of a fire erupting was more imminent in these kinds of spaces.

After decades of touching and inhaling asbestos without a second thought, Navy servicemen, along with the rest of the American population, were informed that the mineral was found to be extremely damaging to the health of humans and although efforts to regulate its use were almost immediately set into motion, hundreds of thousands of people had already been facing its toxicity for years.

Have You Been Exposed to Asbestos on the USS Nespelen (AOG-55)?

We can help you gain a more thorough understanding of how Navy veterans were exposed to asbestos on the USS Nespelen. If you want to file a claim, we can put you in contact with skilled asbestos attorneys. To learn more, call us at 760-621-6147.