The USS Noble (APA-218) was a Haskell-class attack transport. This type of ship was in charge of transportation of armament but mainly of troopship to areas in need of extra armed forces.

The USS Noble was?on active duty during World War II, the Korean War, and the Vietnam War. The ship ended up being transferred to the Spanish Navy through the Mutual Assistance Program and saw no major operations after that. The vessel was, however, renamed by the Spanish Navy attack transport Aragon (TA-11). 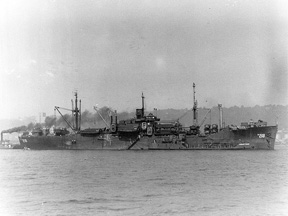 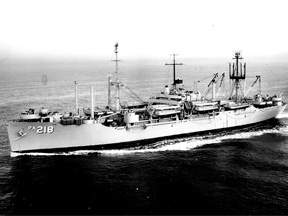 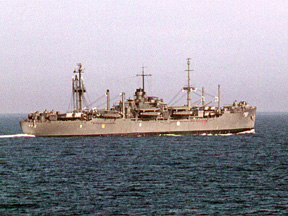 The USS Noble was built by Permanente Metals Corporation in Richmond, California. Mrs. Maxine C. Jones sponsored the ship and Commander Solomon S. Isquith was assigned commanding officer when the ship was placed in commission on 27 November 1944.

In January 1945, the Noble was deployed to Okinawa. As the war came to an end, the ship took on board allied prisoners of war from Korea and carried them to the Philippines. The Noble was also involved in Operation Magic Carpet in which it brought back to the United States servicemen from the Pacific conflict zones. Between 1946 and 1949, the ship reported to the U.S. Atlantic Fleet and conducted local operations off Norfolk, Virginia. While the Noble was at Mare Island Naval Shipyard in San Francisco undergoing an overhaul, the war in Korea broke out in June 1950. By August, the ship was on route to Korea to take part in the amphibious assault in Inchon that occurred the following month.

In 1953, the Noble took part in Operation Big Switch, carrying Communist prisoners from North Korea to Inchon as tensions were being steadied by the signing of the Korean Armistice Agreement. In 1955, the Noble participated in transporting Chinese civilians and military to Formosa. In 1962, the ship took on board 1,400 servicemen and their cargo and departed to the Caribbean. By March 1963, the Noble was deployed to WestPac alongside the 7th Fleet Amphibious Ready Group. In December 1963, the ship was back at San Diego and afterward it was only involved in training exercises until its decommissioning in July 1964. In December 1964, the Noble was transferred to the Spanish Navy under the Mutual Assistance Program. While being a part of the Spanish Navy, the ship served until January 1982, when it was taken off the Vessel Registry. In 1987, the ship was sold for scrapping.

Until the 1970s, all the U.S. military branches used a toxic mineral called asbestos to build equipment that was cost-effective, but also resistant to fire, which are valuable qualities to have when the resources of your country are stripped down by war. One of the consequences of this action is that nowadays hundred of thousands of people that have served prior to the 1970s are suffering from cancerous diseases caused by their exposure to asbestos decades ago. An illness like mesothelioma, for instance, does not show any symptoms until up to 50 years after the exposure had occurred and by the time the signs appear it is generally too late for anything to be done about it.

The reason for heavy usage of asbestos in the military was that the mineral possesses physical and chemical properties for insulating, as it has a low conductivity, and it is also flexible and durable. It would not come as a surprise then to learn that the military branch with the biggest demand for asbestos was the U.S. Navy, since the primary interest was to have the crew that left for at sea operations as safe as possible.

However, as more and more medical data was blaming asbestos for a few cancerous diseases, the mineral was banned from usage and an order was given to remove all asbestos insulation from ships. When disturbed, asbestos becomes a danger for those around it as it is easy for the toxic mineral to be inhaled or swallowed. Instead of being expelled by the body, as it can be the case with other toxins, asbestos fibers lodge themselves within the lungs, heart or the abdomen irritating them constantly until some form of cancer develops.

Have You Been Exposed to Asbestos on the USS Noble (APA-218)?

If you think working with asbestos while serving for the U.S. Navy might have affected your health and livelihood, we can improve your knowledge on the medical and legal aspects related to asbestos exposure. You can call us at 760.621.6147 to learn more.