The USS Oklahoma City was a Cleveland-class Light Cruise, later on, converted into a Galveston-class Guided Missile Cruiser.

The USS Oklahoma City primarily operated during World War II and the Vietnam War. The ship had the longest active service history compared to all the ships in its class. Therefore, Oklahoma City managed to gather a total of 13 battle stars for its engagement in Vietnam missions. 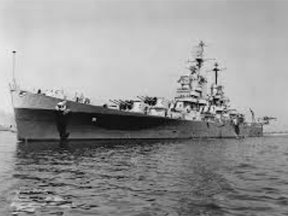 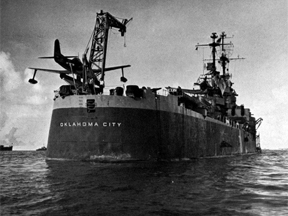 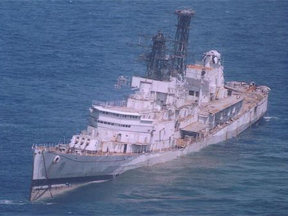 The USS Oklahoma City was built by Cramp Shipbuilding of Philadelphia. The ship was sponsored by Mrs. Anton H. Classen and it was commissioned on 22 December 1944 with Captain C. B. Hunt in command.

After the customary shakedown, the vessel took the route of the Panama Canal and joined Commander Cruisers Pacific Fleet. On 2 May 1945, the ship arrived at Pearl Harbor.

On 22 May, the Oklahoma City departed to Ulithi, and on 6 June it met Carrier Task Group 38 and assisted it during the Okinawa campaign. In fact, the ship was part of quite a few collective operations, like when it formed a bombardment group along with other cruisers and destroyers while participating in the same Okinawa deployment. Even at the end of hostilities with the Japan islands, the Oklahoma City continued to be on guard while sailing around the coast of Japan.

It was only on 20 January 1946 that the ship steamed to the United States. On 15 August the ship was stationed at the Mare Island Navy Yard and on 30 June 1947, the vessel was decommissioned.

The Oklahoma City underwent an impressive conversion and at Bethlehem Steel Corp, Pacific Coast Yard, San Francisco it became a Galveston-class Guided Missile Light Cruiser. Implicitly, the ship's hull designation changed to CLG-5. After the vessel's conversion was entirely finished on 31 August 1960, the Oklahoma City was towed to Hunter's Point. There, on 7 September, the ship began its second commissioning process while having in command Captain Ben W. Sarver.

While engaged in yet another compulsory shakedown training, Oklahoma City successfully fired a Talos guided missile. The ship was the first combatant unit in the US Pacific Fleet to have accomplished such an achievement. After the preparatory exercises, the Oklahoma City underwent more intense training exercises during which it was the flagship for both Cruiser Division 3 and Cruiser-Destroyer Flotilla 9.

On 24 December 1960, the Oklahoma City arrived at Yokosuka, Japan where just a few days later it became the flagship for Commander, United States Seventh Fleet. The vessel took part in SEATO, otherwise known as Southeast Asia Treaty Organization, exercises. In the same period, the ship was given two awards for excellent operations on the sea.

On 14 December 1962, the Oklahoma City entered Long Beach Naval Shipyard in order to complete a large-scale overhaul. Following refresher training in Southern California, in order to get ready for more expanded deployments, the ship departed for Yokosuka to resume its activity as the flagship of the Seventh Fleet. Immediately after it re-joined the Seventh Fleet, US destroyers were attacked by gunboats from North Vietnam, and as a consequence, the ship was on high alert in the Tonkin Gulf for the next 25 days.

Oklahoma City continued to train and steam around ports in the Far East, but then in June 1965, the ship joined in gunfire operations targeting Vietnam. The hostilities only increased, and, therefore, the vessel had to sail around the South China Sea for longer than anticipated. While there, the Oklahoma City was a part of notable operations such as "Piranha", "Double Eagle?", "Deckhouse IV" and "Hastings II". Two and a half years after having been the flagship for the Seventh Fleet, the vessel finally had a chance to return to the United States. It immediately entered San Francisco Bay Naval Shipyard for an overhaul.

In August 1969, the Oklahoma City was yet again by the side of the Seventh Fleet. The ship offered gunfire aid for the troops operating in South Vietnam, organizing attacks against targets in North Vietnam, respectively on the shore and aircraft.

In February 1972, the Oklahoma City had accomplished another important achievement by successfully firing the first surface-to-surface missile in the history of the US Navy. The shot was from its Talos RIM-8H anti-radiation missile and it was aimed at a mobile air control radar van from North Vietnam. In April, in the same year, it was the Oklahoma City that was under air attack by 2 Vietnamese MiG-17s, but even if there were two bombs dropped near the ship, it suffered no major damages.

In April 1975, the Oklahoma City was engaged in Operation Frequent Wind which focused on evacuating Saigon, a city in Southern Vietnam. After completing this task, the ship was scheduled for a vast overhaul. However, even if the funding for its restoration was approved by Congress, in reality, a very small sum was directed toward the Oklahoma City while the rest was distributed toward the improvement of other ships. As a consequence, the ship was only barely functional, and on 15 December 1979, it was decommissioned.

The ship was towed to Pearl Harbor in January 1999 to have parts of it given as a donation to the Missouri battleship, a museum ship. After everything that was considered to have had museum value was taken off the ship, the Oklahoma City filled the role of a target for other ships to use during training. The vessel was hit by torpedoes from a South Korean submarine on 26 March 1999, and as a result, it broke in two and it sank.

Asbestos is a mineral of the fibrous kind that used to be perceived as the savior of construction industries not too long ago. The toxic substance was highly regarded because of its chemical resistance, but also because of properties such as flexibility, durability and, perhaps the blessing appreciated by most, affordability. The dangerous mineral was widely used by the US Navy especially during World War II when resources were scarce and so cheap and all-around efficient shipbuilding materials were a God-given.

The Navy, compared to other branches of the US armed forces, used asbestos in virtually everything. From pipes and cables to equipment, to large portions of the ship itself, most components had asbestos embedded into them.

An important and necessary process of ship tending was overhauling. It was an intense practice that happened regularly to ensure functionality onboard. However, the process always involved the disassemblement of ships in order to repair or to replace the faulty machinery, which dissipated asbestos dust in the air. Even if one's job was on deck far from the tight asbestos-filled below deck spaces, the entire crew had to keep close to the ship while maintenance work was done, which unfortunately meant that not one single part of the personnel was spared the exposure. If you know somebody that suffers from an asbestos-related disease, you should speak to a lawyer specialized in asbestos cases to seek compensation.

Have You Been Exposed to Asbestos on the USS Oklahoma City (CL-91)?

If you are the victim of an illness caused by asbestos exposure, we can help you extend your knowledge of the subject. We can also help you get in touch with your former shipmates. If you would like to learn more, call us at 760.621.6147.