The USS Oriskany (CV-34), otherwise known by the nicknames Mighty O or the O-boat was an Essex-class aircraft carrier that was only part of the United States Navy fleet after World War II had ended. The USS Oriskany carries a name of significance, the inspiration behind the denomination being the 1777 Battle of Oriskany from the Revolutionary War. The main operations of the ship were during the Korean War for which it was awarded two battle stars and its service during the war in Vietnam for which it received ten more battle stars. 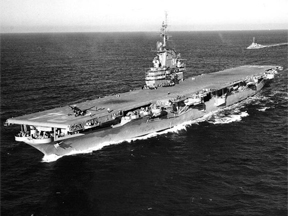 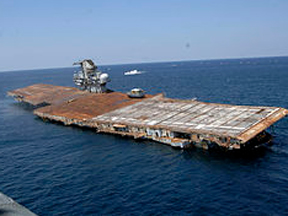 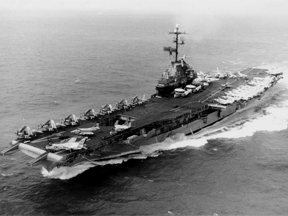 History of the USS Oriskany (CV-34)

The USS Oriskany was built by the New York Naval Shipyard with Mrs. Clarence Cannon as its sponsor. The construction process of the ship was stopped temporarily despite the fact that the ship was almost complete at the time. However, as the work on the vessel started again, many segments were built according to more modern designs. On 25 September 1950, the Oriskany was finally commissioned with Captain Percy H. Lyon. On 15 May 1951, the ship left Newport, Rhode Island for the Mediterranean with the 6th fleet. The vessel made various visits to ports from France, Italy, Greece and Turkey. It returned to Rhode Island in October 1951.

On 6 November 1951, the Oriskany docked at Gravesend Bay, New York. It underwent a complex overhaul and after its completion, it sailed to Norfolk, Virginia to take on ammunition. On 15 September 1952, the vessel sailed to Korea in order to support the efforts of the United Nations. In October, it joined Task Force 77. The main actions taken by the ship were bombings of enemy supply areas. The Oriskany also took down two MiG-15 jets of Soviet design. After briefly leaving the combat zone, the Oriskany left San Francisco yet again for Korea to offer air support for the 7th Fleet. It then went back to San Diego on 22 April 1954, where it completed overhaul at San Francisco Naval Shipyard. The ship then sailed alongside the Fast Carrier Task Force, mainly focusing on locations from Japan and the Philippines. This tour lasted until 7 September 1955, when the Oriskany steamed back to California.

In 1956, the ship underwent yet another modernization program registered as the SCB-125A, yet it was decommissioned shortly after on 2 January 1957. With its new updates such as aluminum planking and enclosed hurricane bow, the ship was recommissioned on 7 March 1959 at San Francisco Naval Shipyard with Captain James Mahan Wright commanding. Following another overhaul on 30 March 1961, the Oriskany benefited from the installation of the Naval Tactical Data System, which was a first for an aircraft carrier. After departing San Diego, where it completed compulsory post-overhaul shakedown training, the vessel was ordered to the Far East again in June 1962. The Oriskany went back to San Diego in March 1964 to start overhaul at Puget Sound Naval Shipyard.

On 5 April 1965, the ship left San Diego and was headed toward South Vietnam to join the many more U.S. Marines already there in support of the Army of the Republic of Vietnam facing the communist pressure. In May 1966, the Oriskany was yet again departing for Far East waters, docking at Yokosuka, Japan on 14 June. On 26 October 1966, a fire erupted on board spreading rapidly and killing 44 men. Many of the victims were esteemed combat pilots. As a consequence, five people were court-martialed but in the end, they were all acquitted. The tragedy led to a change in the flare design to a safer one that would not be easily prone to accidental ignition. In October 1967, Lieutenant Commander John McCain was shot down as he flew off the ship in an A-4 Skyhawk. He was captured and held prisoner until January 1973.

On 31 January 1968, the Oriskany docked at San Francisco Bay Naval Shipyard where it underwent an eight-month overhaul. The updates were mainly focused on the electrical and water systems. Over the winter, the ship completed shakedown and afterward left for what was referred to as the "Yankee Station", which was an area in the Gulf of Tonkin close to Vietnam where the U.S. Navy gathered to launch attacks during the war. On 20 September 1969, Captain John A. Gillcrist became the commanding officer of the ship. After a dry dock at San Francisco Naval Shipyard during the winter, the Oriskany began another deployment in the Far East, arriving off the coast of Vietnam on 14 June 1970, where it immediately engaged in combat, targeting logistics areas in Laos to destroy the Vietnamese communication and storage spaces.

The Oriskany was a part of another Vietnam deployment in 1971, with its main operations being to continue to strike Laos. In November, the vessel contributed to Operation Proud Deep, which was one of the biggest attacks of North Vietnamese airfields. Other particularly memorable strikes occurred when there were ongoing peace talks in Paris with no concrete conclusion. The Marines at Yankee Station launched strikes at communist bunkers in South Vietnam. The ship was also a part of Operation Linebacker II, nicknamed the "Christmas bombing" campaign. With peace finally signed on 27 January 1973, the aircraft from the Oriskany ended their assaults on Vietnam that day. After completing a much-needed overhaul at Alameda, California, the ship was ordered to India, which was quite a change of scenery from its previous seven deployments in Vietnam.

On 5 June 1974, the Oriskany docked at Alameda, California, and then in August, the ship was stationed at Long Beach Naval Shipyard, where due to budget cuts the vessel was registered for inactivation. The Oriskany was finally decommissioned on 30 September 1976. With the Cold War ending, the U.S. Navy that was still active on duty was significantly reduced which led to a ship like the Oriskany to be definitively taken out of the Naval Vessel Register in 1989.

Initially, the ship was supposed to be scrapped, but after a few years, the Navy managed to get ownership of it again. In April 2004, the Navy announced that the vessel will be transformed into an artificial reef in the waters of Florida. They partnered with the Environmental Protection Agency to investigate the impact such an action will have on the environment and after being thoroughly approved by the EPA, the ship was sunk by Navy personnel on 17 May 2006.

Asbestos-based materials were heavily used in shipbuilding and as it happened, they were especially used in products that were utilized in the construction of enclosed rooms and narrow areas, such as the engine rooms, the boiler rooms and other places located below the deck where it was difficult for fresh air to come by and the crew had no other option but to breathe in polluted air.

The reason for this heavy asbestos usage was a simple one: it was not expensive, it was accessible and it displayed great fireproofing qualities. However, it was later demonstrated that this mineral was extremely toxic and that it is the cause of grave forms of cancers of the respiratory system, the worst of which being mesothelioma.

The people who served in the U.S. Navy have an increased chance of developing asbestos-related diseases and depending on the circumstances may be entitled to legally recover damages.

Have You Been Exposed to Asbestos on the USS Oriskany (CV-34)?

If you would like to learn more about asbestos and the role it had in the U.S. Navy, we can help you with that. We can also help you connect with your former shipmates as well. Call us at 760.621.6147 for more information.