The USS Paricutin was a Mount-Hood class ammunition ship built by the North Carolina Shipbuilding Company in 1944. The auxiliary ship was used by the US Navy to transport ammunition. These ships were usually commissioned during the two World Wars and the Korean and Vietnam War. The first missions of the USS Paricutin after the shakedown were within the Pacific Fleet. Here, the vessel had to transfer ammunition to Bangor, Washington and Port Chicago.

On November 20, 1947, the ship was ordered to Mare Island Naval Shipyard to be inactivated. Soon after this, on April 30, 1948, the USS Paricutin was decommissioned and berthed at San Francisco Group of the Pacific Reserve Fleet. 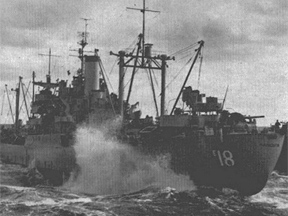 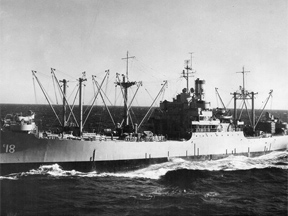 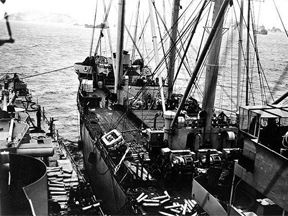 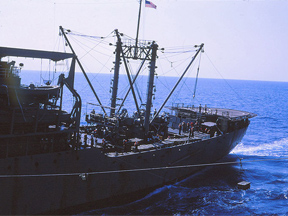 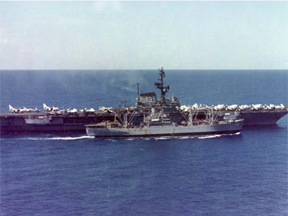 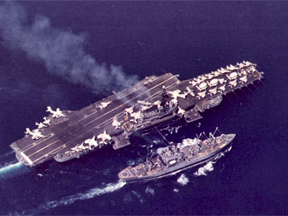 History of the USS Paricutin (AE-18)

Due to the beginning of the Korean War, many vessels were recommissioned to fight for the country. The USS Paricutin was also reactivated on June 24, 1950, to be assigned to Service Squadron 1. Another important mission for the vessel was in the Far East where it operated from US Fleet Activities Sasebo. Then, she rearmed the carrier task forces off both coasts of Korea. Thus, the ship served the combat units for 18 months until she returned to the United States in March 1952. The vessel visited Korea once more the same year in July and spent there almost 7 months. She returned to San Francisco the following year on March 19 where it remained stateside until the Korean Armistice Agreement was announced.

After the Korean War, the USS Paricutin was used for training operations with the Seventh Fleet Units in ports like Hong Kong, the Philippines, Guam or Taiwan. These operations continued until the vessel was called to support the American operations in Vietnam.

During the 20th century, many US Navy vessels were built with asbestos-containing products such as gaskets, valves, pipes, turbines or boilers. Asbestos has great insulation properties, but it becomes dangerous if its airborne fibers get into the lungs. Many US veterans developed serious respiratory diseases following asbestos exposure during the shipbuilding process, the maintenance or the reconditioning of a ship. The asbestos exposure was possible while working in poorly ventilated spaces like the engine rooms and boiler rooms or while performing tasks near a damaged asbestos-containing product that might facilitate the release of asbestos fibers in the air. Sadly, the individuals were not aware of this danger and the fact that asbestos causes major health problems was not known to them. Nowadays, many asbestos victims suffer from mesothelioma, asbestosis or other types of cancer. For this reason, they are entitled to file a claim that is likely to bring them compensation if it is proven that the respective disease was caused by asbestos exposure while serving the US Navy.

Have You Been Exposed to Asbestos on the USS Paricutin (AE-18)?

Our main goal is to correctly inform you on asbestos use within the US Navy and to provide you a rich database with US Navy veterans, including your shipmates. You can call 760.621.6147 anytime for support!