The USS Pollux (AKS-4) was a Castor-class general stores issue ship. The main preoccupation of the vessel was the transportation of supplies and equipment to combat zones.

The USS Pollux most notably operated during the Korean War and during the Vietnam War, although it was also involved in missions that occurred during World War II. The ship was awarded five battle stars for its time of service in Korea and, additionally, another seven campaign stars for its actions in Vietnam. 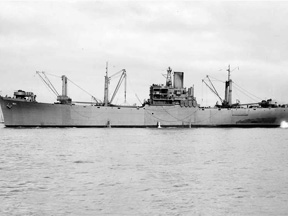 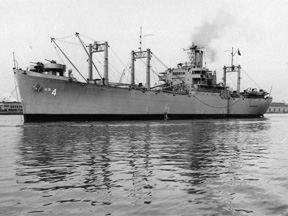 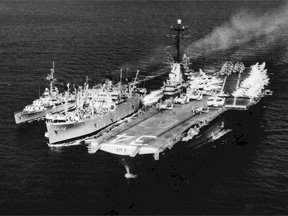 History of the USS Pollux (AKS-4)

The Pollux was built by the Federal Shipbuilding and Dry Dock Company in Kearney, New Jersey. After the ship completed shakedown exercises, it was ordered to the Commander Service Forces in the Atlantic. The Pollux began its service off the U.S. East Coast reporting mainly to ports from Norfolk, New York and New Jersey. In August 1943, the vessel steamed to the Pacific Ocean sailing from the area of the Panama Canal to Australia without being attached to a fleet. For the following 15 months, the Pollux was involved in operations occurring in both Western and Eastern Guinea and also in the campaign in the Admiralty Islands.

The Pollux also took part in the Philippine Liberation Campaign. The ship was docked at New Guinea and had a shuttle service running to assist both forces that were afloat and servicemen at sea bases. A few locations between which the ship was alternating were Lingayen Gulf, Subic Bay, Morotai, Manila, Taloma Bay and Puerto Princesa. In February 1945, the Pollux helped with the evacuation of 124 people from Lingayen Gulf. These men represented the first group of prisoners of war in Manila to be freed. When World War II ended, the ship conducted operations in the Pacific waters alongside Service Squadron 1, service for which it was awarded the Navy Occupation Service Medal. As part of its duties, the Pollux also took part in the atomic tests launched at Bikini Atoll. For its actions from March 1947 to August 1949, the Pollux received the China Service Medal.

In April 1950, the ship was placed out of active duty but as tensions were rising on the Korean front, the recommissioning of the Pollux was ordered and the ship was active and ready to operate by August the same year. Between October 1950 and July 1953, the Pollux participated in the Korean War. From 1953 until 1957, the ship was mainly involved in tasks off the West Coast in the United States and some of them located in the Far East, such as operation in Korea, Japan and the Philippines. In 1958, the Pollux underwent an extensive overhaul. Shortly after its modernization, the ship was assigned to a new homeport in Yokosuka, Japan, alongside Service Group 3, without ever coming back to the United States again. When the conflict in Vietnam settled, the Pollux was ordered to the South China Seas, assisting the various units of the 7th Fleet. In December 1968, the ship was placed out of commission at Yokosuka, Japan.

Compared to the other U.S. military branches, people who served in the Navy were exposed to the largest quantities of asbestos because it was in this field that the demand for the mineral was the highest.

The reasoning behind it was that given the fireproofing capabilities of the material as well as its flexibility and strength, asbestos-containing materials were considered to be safer for at sea activities, as the risk of fires erupting on board was lowered. As a consequence, Navy ships were embedded with asbestos almost in their entirety.

As the preparations for World War II were ongoing, ship production increased and, implicitly, so did the asbestos usage. Thus, Navy personnel had been exposed to the toxic mineral from the 1930s until the late 1970s when there were orders given for asbestos insulation to be removed from all the vessels, as the aspect of its damaging effects had become a confirmed fact.

Have You Been Exposed to Asbestos on the USS Pollux (AKS-4)?

If you served on the USS Pollux (AKS-4) there is a great risk that you were exposed to asbestos. We can give you more information about the usage of asbestos in the Navy and we can help you find your former shipmates. If you would like to find out more, call us at 760.621.6147.