The USS Prairie AD-15 was a Dixie Class Destroyer tender. It provided maintenance assistance to various warships from 1939 to 1993. Shortly after being decommissioned it was sent to India in order to be scrapped. The USS Prairie AD-15 carried its most notable operations during World War II and the Vietnam War. As impressive the ship's workshop capabilities were, so was the initiative from its time in Taiwan called People-to-People, which had as objective the extension of its aid-oriented mission by sheltering children and providing medical care.

The USS Prairie AD-15 was built for the U.S. Navy right before the beginning World War II on December 7th, 1938 by New York Shipbuilding, Camden, New Jersey and launched on December 9th, 1939, while benefiting from the support of its sponsor, Mrs. Samuel M. Robinson. It was commissioned on August 5th, 1940 with Capt. J. B. W. Waller in command. At the time when the United States was first attacked, on December 7th, 1941, the Prairie was doing maintenance jobs for allied ships while docked at Argentia, the finish line of the transatlantic route. In relation to the other American and allied warships, the Prairie filled in the role of the caregiver, providing aid from technical to medical. 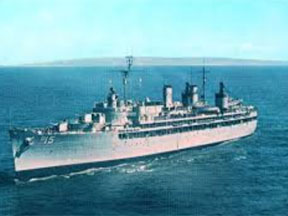 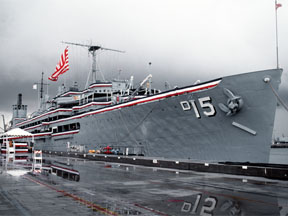 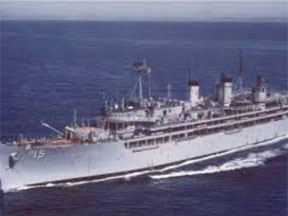 History of the USS Prairie (AD-15)

On 29 May 1942, a fire had reached the Prairie from a Spry (PG-64) that the ship was trying to secure at the time. The damages were attended to at Boston, followed by the ship once again leaving for Argentia. On 22 February 1943, the Prairie offered support to U.S. Coast Guard Cutter Campbell (WPG-32) after the latter had been badly impacted by a German submarine.

On 23 September 1943, the Prairie steamed to Boston and then to Pearl Harbour where it was docked until February 1944. By February 7th, the ship departed Pearl Harbour in pursuit of the forces moving operations to another location, the Marshall Islands. Over the course of the war, the Prairie kept close to the Marshall Islands to provide assistance. After the war came to an end, the Prairie was located in the Marianas and Carolines as it followed the progression of the operations. On 30 November 1945, the ship returned to San Francisco.

As for its part in the Korean War, there are 3 main intervals in which the Prairie supported U.N. operations: from 2 February to 3 August 1951, from 6 April to 10 September 1952 and from the end of August 1953 to 11 April 1954. By March 1956, the destroyer tender was on its way back to San Diego as it completed a tour around the world, which was not common for this type of ship.

The post-war period sees the Prairie sailing to Yokohama on 8 May 1958 to participate at the festivities where Yokohama and San Diego articulated a vision of becoming sister cities. In October 1959, the ship attended the "10-10 Day" festival in Taiwan to show support for the Nationalist Chinese equivalent of an Independence Day for the United States.

20 years after its last visit, the Prairie steamed to Pearl Harbour on 15 July 1966 where it oversaw the repairing of more than 100 ships from the area before leaving on December 6th. In July 1967, the Prairie began a tour to Pearl Harbour extended to over 6 months. The most notable intervention during this time would occur on December 11th. It was a rescue mission involving the survivors from the yacht Anobell navigating through the tempestuous waters just 600 miles off Hawaii and safely arriving in San Diego.

In 1968, while docked in Taiwan, the Prairie launched the People-to-People initiative mostly concerned with providing aid to remote areas including the refurbishing of an orphanage and offering dental care to help improve the living conditions in hard to access parts of the island.

At the beginning of the 20th century when the industry was booming all around the world and especially in the United States, asbestos, a fibrous mineral, was at the receiving end of all businesses. Praises for its highly convenient properties: it was easy to obtain, and more than affordable, and its chemical components prompted it to the status of a miracle product since it constituted an efficient fire retardant and insulation in general.

By the 1930s there already had been expert opinions linking asbestos to diseases, especially cancerous ones, but there was money to be made, and so big companies withheld any suspicious information from workers and consumers alike. The well-being of those in the military, people who voluntarily risked their lives for the safety of others, have, too, been shamelessly endangered by this unsuspected enemy.

Until about the mid-1970s, a large number of ships and shipyards constructed under the watch of the U.S. Navy used an immense quantity of asbestos. The highly toxic mineral was especially marketed to the Navy since it found great use in its heat-resistance for the below-deck spaces, from engine to boiler rooms. As a result, thousands of uninformed people would end up suffering from asbestos-related diseases. If you or a loved one have been affected by asbestos exposure, you can discuss the circumstances with a specialized attorney in pursuit of just compensation.

Have You Been Exposed to Asbestos on the USS Prairie (AD-15)?

Testimonial of a Navy veteran who served on the USS Prairie: "I served aboard the USS Prairie from 1969 to 1971 and I have all sorts of medical problems today. That pipe lagging that was asbestos it used to snow down on us and I'm not exaggerating either. I was an electrician's mate on the Prairie which was a snipe. There was piles of that stuff all of the time. I just happened to see an article on that on the USS Prairie. I believe they referred to it as the USS Asbestos."

We can be of assistance in helping you sort of your unique experience with asbestos exposure. If you intend to take legal action in order to recover damages, we can put you in contact with asbestos lawyers. Call us at 760.621.6147 for more information.