The USS Puget Sound (AD-38) was a Samuel Gompers-class Destroyer Tender. It was an auxiliary maintenance vessel that provided technical support to many other ships for almost 29 years. It was on duty during quite notable operations, assisting warships by fixing faulty equipment and by supplying the crew with food and medical products. The ship's most notable missions include the last part of the Vietnam War, the crisis in Lebanon, Operation Desert Storm, Operation Desert Shield, and Operation Restore Hope. 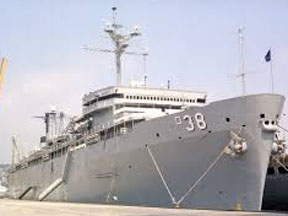 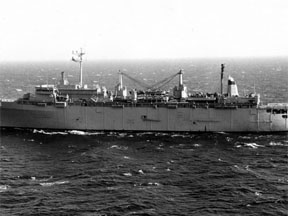 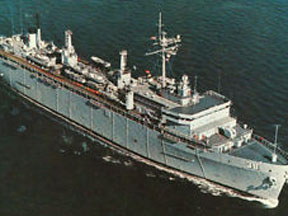 The second ship of the United States Navy to be named Puget Sound, The USS Puget Sound (AD-38) was built by the Puget Sound Naval Shipyard in Bremerton, Washington after they took the order for the ship to be constructed on 29 December 1964. The naval vessel was launched on 16 September 1966, and it was commissioned on 27 April 1968 with Capt. R.B. Jacobs in command.

The Puget Sound was not ever engaged in fighting on the sea, instead, it strictly provided support to other warships. When it comes to the ship's hull number, the significance behind it is as such: the 'A' stands for 'Auxiliary', the 'D' stands for 'destroyer tender', and the '38' represents the vessel's designation number which distinguished it from other ships that are in the same category. The sole purpose of the Puget Sound was for it to make sure that the Navy's machinery was in its best condition for the warships to be able to venture into operations at full capacity.

The Puget Sound's duties were aligned for its entire span of existence on the sea with the activity of the Atlantic Fleet. Therefore, the ship was docked for extended intervals in places such as Newport, Rhode Island; Gaeta, Italy and Norfolk, Virginia. The Puget Sound saw quite a few conflicts during its time of service, such as the end of the Vietnam War or the crisis in Lebanon, and also intense operations referred to by their codenames: Desert Storm, Desert Shield and Restore Hope. While performing tasks to help keep the Atlantic Fleet moving, the USS Puget Sound had to ensure that the ships had been fully stocked with food and medicine as well. Together they navigated the waters of the Atlantic Ocean, Mediterranean Sea, Red Sea, and Persian Gulf. The Puget Sound could carry a SH-3 Sea King helicopter or any other aircraft that was of similar dimensions, since it was equipped with a flight deck and hanger. The ship had the opportunity to do just that while serving in Gaeta, Italy.

Due to the fact that the Puget Sound had all these resources readily available, the vessel was capable of providing help of great significance. However, the ship was limited when it came to repairs that needed a dry dock in order to be restored properly. Its abilities were also quite restricted in the cases which needed underwater interventions. The Puget's most valuable assets were its two stationary cranes. With the help of these, the crew from the tender would move heavy equipment from another ship onto their deck, replace the necessary pieces and then return it to its owner. The cranes were just as much used to resolve issues on the ship's own deck, allowing them to deal with heavy materials in a time-efficient manner.

In addition to providing ammunition, fuel, food, and water, within the crew, there were also people qualified to offer medical, mostly dental, services. At the same time, the ship was intended to cater to needs that would exceed those of survival, and so among its resources, there were also books, tobacco, grooming products and other objects for off-time use.

In 1979, all armament, which was little to begin with, was removed from the ship. The decision had to do with adjusting to the modifications that were being implemented so that it would be possible for women to be able to serve as part of the vessel's crew. In the US the law did not permit women to be on duty on ships that could be considered in any way combatant, which led to getting rid of all artillery.

The Puget Sound was decommissioned on January 27, 1996, and it was berthed at Naval Inactive Ship Maintenance Facility in Philadelphia, Pennsylvania. In 2008 the vessel was sold for scrapping to ESCO Marine, Brownsville, Texas.

In the first part of the last century, just as industries were beginning to rise to unimaginable heights due to more and more economically-savvy laws surrounding trade and the incorporation of modern technology in the business arena, a mineral called asbestos, that could be acquired in massive quantities for low prices made the rich richer and the poor terminally ill.

Industry employers often talked about asbestos as being a 'magic mineral' in reference to all the invaluable properties it displayed while also being accessible virtually anywhere. It was their greatest ally and everyone else's biggest enemy. Steam pipes, turbines, ovens among other equipment benefitted from the non-flammable quality of asbestos, so the highly demanding, both in a physical and financial sense, high-temperature work was facilitated by the mineral.

With such a spotlight on it, asbestos became the object of study of scientists at the time. The results were worrying, connecting it with a few forms of cancer. Unfortunately, the greater mass of the people was only to be worried after having already developed diseases. Many of personnel from the US Navy are the victims of the ploy, since the medium they worked in, the ship itself, was basically infused with asbestos. If you or somebody you know suffer from an asbestos-related illness, you should talk to an experienced lawyer in order to seek the compensation you deserve.

Have You Been Exposed to Asbestos on the USS Puget Sound (AD-38)?

"I used to work on crane braking systems on the Puget Sound, I know now, that they were made with asbestos because they changed the maintenance procedure after 4 years to wearing suits and special vacuums. Before that, we crawled into cranes had it all over us." - Bryan T.

Learn more about the risks of asbestos exposure and how extensively it has been used in the Navy. We can also help you get in touch with your former shipmates. Contact us at 760.621.6147 for more information.