The USS Rankin (AKA-103) was a Tolland-class attack cargo ship. The ship provided supplies, artillery and armed forces from the period of World War II until the 1970s.

For its services during World War II, the vessel was awarded one battle star. Additionally, it was the winner of the Battle Efficiency Award six times, which allowed its crew, by special orders, to wear a Gold E distinction on their arms.

Technical Features of the USS Rankin (AKA-103) 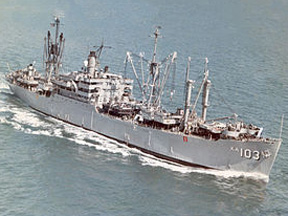 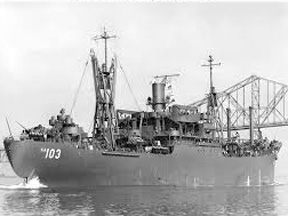 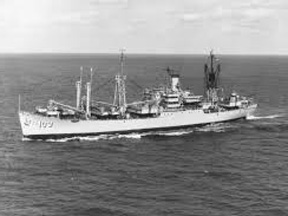 The USS Rankin (AKA-103) was built by North Carolina Shipbuilding Company in Wilmington, North Carolina. The ship was commissioned on 25 February 1945 with Lieutenant Commander Thomas D. Price in command and Mrs. L. C. Freeman as its sponsor.
After completing an Atlantic shakedown cruise, the ship reported for duty to the Pacific Fleet starting 1 April 1945. While at San Francisco, the Rankin loaded equipment and departed for Hawaii where it engaged in intense amphibious exercises.
Before heading to Ulithi on 25 May 1945, the vessel took on board 5,000 tons of ammunition while stationed at Honolulu. The Rankin participated in the Battle of Okinawa for 17 days, and for that time period, the ship had to confront over 100 kamikaze assaults. It was between those ceaseless attacks that the crew unloaded armament on the shore.

In June 1945, the vessel left Okinawa and was sailing to Saipan. In September 1945, the Rankin docked at Manila. There, it was paired with TransRon 20 alongside which it traveled to Lingayen Gulf to land equipment and men. On 1 October 1945, the ship departed for Japan and had to sail at anchor for almost three weeks while the courses to Nagoya, southern Honshu were screened for mines. After arriving at its destination, the vessel embarked marines and damaged landing craft to carry them to San Francisco. Between 1946 and 1947, the Rankin was on duty in the Far East, stopping in Chinese and Japanese ports. In May 1947, the Rankin was placed out of active duty at Suisun Bay, California. However, in March 1953, the ship was recommissioned at the Todd Shipyard, Alameda, California with Captain Bernard H. Meyer commanding.

After completing shakedown, the Rankin reported to the Amphibious Force, Atlantic Fleet, assisting in operations mainly located in the Caribbean and the Mediterranean. In July 1958, the Rankin was involved in the effort of the U.S. Navy of landing about 5,000 marines in Lebanon in an attempt to keep under control the tensions in the area. In 1959, the ship left Norfolk on a six-month deployment to the Mediterranean as a part of the 6th Fleet. To commemorate this tour, a cruise book was released. For nearly a decade, the Rankin made regular cruises to the Caribbean alongside Amphibious Squadron 10, visiting ports from Cuba, Haiti, Jamaica, Puerto Rico and the Virgin Islands.

From 28 September to 3 December 1964, just off the Spanish coast, the ship took part in Operation Steel Pike I, the largest training exercise in history conducted by the U.S. Navy and the U.S. Marines. After training was completed, the Rankin resumed regular deployments in the Caribbean with the Amphibious Squadron.

In April 1965, the Rankin was a part of the units responsible for the U.S. intervention in the Dominican Republic Civil War. The ship was on evacuation duty, embarking more than 1,000 U.S. civilians and refugees. For its service during this operation, the personnel on the Rankin received the Navy Unit Commendation. In October 1966, the vessel was ordered to offer assistance to those affected by Hurricane Inez in Cayes-Jacmel, Haiti as the hurricane had massively damaged the island. The crew unloaded large amounts of supplies such as food, medical supplies and building materials.

In 1968, the Rankin took part in exercise Riverine '68 which had the purpose of showing the sea forces the newest methods to employ in jungle warfare. In December 1968, the ship was involved in the naval operations supporting the Apollo 8 mission. The Rankin was sailing south of Bermuda as a recovery ship in case there was need of intervention. From July to December 1970, the ship left for yet another Mediterranean tour that ended up memorialized in another cruise book. On 11 May 1971, the Rankin was placed out of commission, and in 1988, it was sunk and transformed into an artificial reef for fishing and diving in Florida.

Asbestos Risks on the USS Rankin (AKA-103)

Due to its resistance to corrosion and high temperatures, asbestos was the ideal material to use in construction jobs and particularly in the building of ships. In the case of vessels, the mineral was used for insulation purposes, especially when it came to objects such as boilers, hot water pipes or incinerators.

It was in these narrow spaces that asbestos dust filled the air more and more as the time passed and the vessel needed repairing or was deteriorating, with asbestos being disturbed and becoming airborne, leading to the workers frequenting those areas to being highly exposed to the toxic fiber.

Also, because of the outbreak of World War II and that of the Korean War, the demand for more warships increased greatly, which meant that more asbestos was exploited, endangering the lives of hundreds of thousands of people that were finding employment in fields working with the material.

Have You Been Exposed to Asbestos on the USS Rankin (AKA-103)?

We can help you understand the ways in which asbestos products were used by the U.S. Navy. We can also help you reach out to your former shipmates. Call us at 760.621.6147 for more information.