USS Richard E. Byrd (DDG-23) was a Charles F. Adams-class Guided Missile Destroyer. It was part of the US Navy and it was named after Admiral Richard E. Byrd, an acclaimed polar explorer.

Right after being commissioned, the USS Richard E. Byrd had to sustain missile competence and, also, the ship had in-motion training in the areas of San Juan and Guantanamo Bay. In the 1980s, alongside other NATO ships, the Richard E. Byrd escaped a terrorist attack and departed from the incident safe and sound. 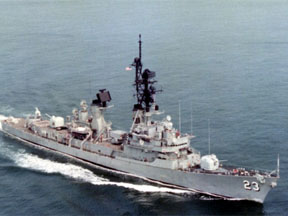 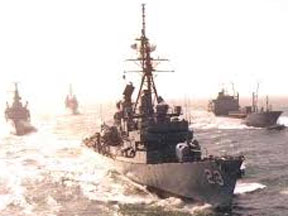 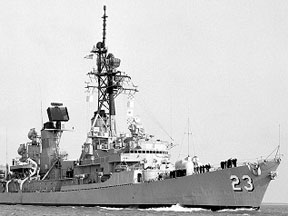 The USS Richard E. Byrd (DDG-23) was built by Todd Shipbuilding Corp. Seattle, Washington. The vessel was launched on 6 February 1962 having Mrs. Richard E. Byrd as its sponsor and, simultaneously, Mrs. Robert G. Breyer, her daughter, who filled in the role of a proxy sponsor for her mother.

The USS Richard E. Byrd was commissioned in 1964 on March 7th with Commander Walter G. Lessman in command.

The vessel spent 45 days at Puget Sound Naval Shipyard at Bremerton, Washington undergoing preparations of all sorts and it was only after that it sailed to Norfolk, Virginia, its homeport, by taking the route of the Panama Canal. The ship arrived at its destination on 14 June 1964.

The Richard E. Byrd steamed to the Mediterranean on January 6th 1965. During this deployment it was part of the Destroyer Division 182. While engaged in operations with the 6th Fleet, the ship joined US forces, as well as NATO ones, in partaking in AAW and ASW types of exercises.

In 1967, the ship departed south to reach another operations area in Jacksonville, Florida. The Richard E. Byrd was busy being of service to the Lexington aircraft carrier, but the crew suspended their activities so they could come to the rescue of Lt. John F. Dickinson, who had crashed his A4-E aircraft after a failed landing attempt. In the same year, 1967, the vessel was part of the screen of the USS America carrier.

The entire summer of 1968 was dedicated to training programs and coastal missions meant to keep the ship and the crew sharp and up-to-date. In September, the Richard E. Byrd sailed to participate in "Silver Tower", a NATO exercise that was taking place in the North Atlantic and in the Norwegian Sea.

On 6 October 1969, both the ship and the crew accompanied Senator Harry F. Byrd at the Virginia Institute of Marine Science at Gloucester Point, Virginia to support the Richard Evelyn Byrd Hall to be found there.

For the first months of the year 1970, the destroyer was preoccupied with local operations in the area of Norfolk. The ship steamed along the east coast and in the Caribbean.

The beginning of 1985 marks the starting point of a six-month cruise focused on the North Atlantic area, with a stop at Lisbon, Portugal. On January 28th, around 3 a.m., just as this stop was about to come to an end, the Richard E. Byrd together with other 5 NATO ships were confronted with a terrorist attack from a group known as Forcas Populares 25 de Abril. They all escaped and there were no destructions and no casualties caused to any of the ships involved.

The Richard E. Byrd was decommissioned on 27 April 1990, and afterwards it was eliminated from the Navy list on October 1st, 1992. In August 1993 it underwent an official transfer to the Greek Navy. Once there, the ship was dismantled and parts of it were re-used in the building of other destroyers there.

Using it from as early as the 1900s, by the beginning of the 20th century the United States had already taken the lead worldwide in incorporating asbestos-related materials in pretty much all of their most important industries at the time, such as construction, weaponry and textiles. For the businessman and the common worker alike it simply made sense to greatly exploit a substance that provided that many benefits, most notably resistance to fire and electricity, combined perfectly with its handy availability.

Pulmonary issues had been linked to asbestos exposure since the 1800s, yet with the booming economy expanding to unanticipated peaks, it became a matter of inconvenience to even consider re-arranging the plan so that production would not be based on a highly toxic mineral. Inhaling, ingesting or physically touching asbestos-based products, the list of potential victims is frightening to consider. From laborers on construction sites to those enrolled in the US Navy, entire generations unjustly suffer because of terrible diseases.

While true that personnel like those in the Marine voluntarily signed up to put themselves in harm's way, the illnesses they developed years later did not enter the conditions of that contract.

Have You Been Exposed to Asbestos on USS Richard E. Byrd (DDG-23)

If you believe that have been exposed to asbestos on the Richard E. Bird and you want your case should be taken to court, it would help to have a professional by your side. Call us at 760.621.6147 for more information.