The USS Richmond K. Turner (DLG-20/CG-20 was a cruiser designated as a destroyer leader belonging to the Leahy class. It was named in the honor of Admiral Kelly Turner, who served in the United States Navy during World War II, best known as the commanding officer in the Pacific theater of operations. The USS Richmond K. Turner was built at the New York Shipbuilding Corporation's shipyards in New Jersey as one of the nine Leahy-class double ended guided missile destroyers and was launched in April 1963, having Mrs. Claude V. Ricketts as a sponsor. 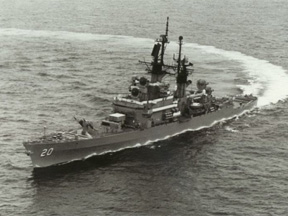 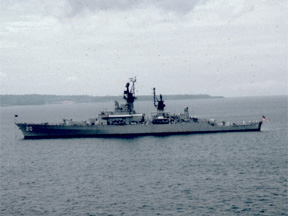 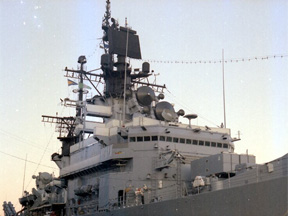 Once it was commissioned for the US Navy service with Captain Douglas C. Plate in command, the ship left for San Diego where it remained stationed for several months before sailing for the Western Pacific to serve as a missile support ship as part of the Task Force 77.

The Richmond K. Turner departed the South China Sea in September 1965 to join the Search and Rescue Destroyer Unit and operated out of Tonkin Gulf before returning on the West Coast several times during the next 3 years, having successfully completed several missions in which eight aviators were rescued. On its third tour, the ship sailed for Vietnam in June 1968 where it assisted the ships in the Asian waters for several months. After taking on the duties of an anti-submarine warfare school ship and extensive training, the USS Richmond K. Turner was deployed for the fourth time in the West Pacific where it operated out of the Sea of Japan and off the coast of Vietnam until July 1970 before returning to San Diego via Guam and Pearl Harbor.

After being docked for one year at Bath Iron Works shipyard decommissioned, the ship spent its next 7 months in extensive training, exercises, and trials off the East Coast and had its homeport moved to Norfolk where it had another long period of inactivity before its re-designation as CG-20 in July 1975 and overhaul at the Charleston Naval Shipyard. After several surveillance missions in the West Indies and the West Coast of Nicaragua, the vessel engaged in fleet and independent operations making many port visits all over South European countries. The USS Richmond K. Turner was the selected ship to represent the United States in Saint Tropez celebrating the 35th Anniversary of the Allied Landings in southern France. It was also the first deployed US Navy ship to successfully launch a Harpoon missile. This happened in the Gulf of Sidra in July 1986, hitting and destroying the target from a distance of 78 miles. In the early-mid 1980s, the vessel experienced 6 total, highly successful deployments in the Mediterranean Sea as part of the US Sixth Fleet and disabled a Libyan patrol boat with a Harpoon missile, having been awarded two prestigious military awards for its service during these missions.

After several engineering improvements, the ship was sent in the Persian Gulf as part of the Theodore Roosevelt battle group, arriving as the hostilities of Iraq's invasion over Kuwait begun. Its mission was to protect the carriers and serve as an advance picket ship in the dangerous, mine-infested waters off Kuwait. Once the hostilities ended, the vessel continued its service supporting the naval operations of the United Nations against Iraq, and later participated in the Operation Provide Comfort, which was an operation aimed at helping tens of thousands of Kurdish refugees after the defeat in the war.

The USS Richmond K. Turner returned once again in the Mediterranean Sea as its last deployment, serving as an anti-air warfare command during Operation Deny Flight in Bosnia-Herzegovina. As its last assignment before decommission, the ship took part in the US Navy's LEAP program and fired the first LEAP shot ever which was a revolutionary step in the history of the Navy's missile technology.

The Richmond K. Turner was finally decommissioned in April 1995 after 32 years in the Navy's service and sunk as target practice off Puerto Rico.

Similar to any other US ship built before 1980, the USS Richmond K. Turner also used a lot of what we now recognize as an extremely hazardous mineral, asbestos, as insulation in most parts of the ship. The mineral's heat-resistance and electrical insulation properties, which, the marine sector took the most advantage of, led to a blatant increase in asbestos use and therefore, exposure to dangerous amounts of this harmful mineral for the people working on or sailing those ships. Anyone who has worked on a US Navy ship prior to 1980, can assume they have been exposed to certain levels of asbestos at some point. As they enter the lungs through inhalation, asbestos fibers remain inside the body, continuously scarring the tissue and often takes 20 to 30 years before signs of disease such as asbestosis, mesothelioma, and lung cancer start to show up.

Have You Been Exposed to Asbestos on the USS Richmond K. Turner (DLG-20/CG-20)?

If you believe you have been exposed to asbestos while working on the USS Richmond K. Turner we can help you with more information about your exposure and the problems you may be facing. Call us at 760.621.6147.