The USS Rockbridge (APA-228) was a Haskell-class attack transport ship. The name of the ship was inspired by the Rockbridge County in Virginia. Vessels of this type were designed to carry armed forces for invasion missions in the conflict zones.

The USS Rockbridge mostly took part in operations during World War II. For its active service during the war, the ship received quite a few awards, among which are the World War II Victory Medal and the National Defense Service Medal. 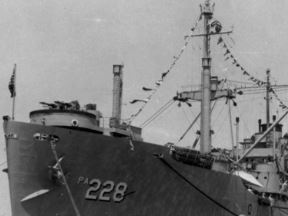 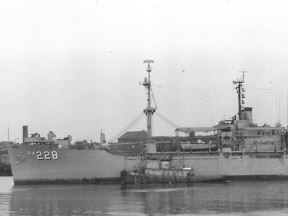 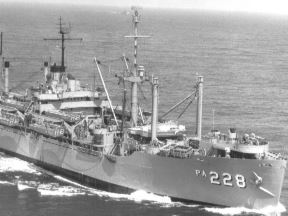 History of the USS Rockbridge (APA-228)

The USS Rockbridge was built by the Kaiser Shipbuilding Company in Vancouver, Washington. Mrs. C. J. Hearn was the sponsor of the vessel and Captain William W. Cone was assigned as commanding officer the day the ship was commissioned on 18 November 1944.

By February 1945, the Rockbridge was stationed off Pearl Harbor from where it then steamed to Iwo Jima where it operated for approximately two weeks.

Later on, in the months of May and June, the ship sailed from Seattle, Washington to Okinawa transporting servicemen to Japanese combat zones. The Rockbridge sailed the Okinawa area for six days, a period in which it was under continuous assault from the enemy aircraft. Fortunately, the vessel finished its operations in the region without any damage as it was constantly under a screen of smoke provided by the other American units in the fleet.

After the official surrender of the Japanese, the Rockbridge sailed to Japan two times, in September and then in October as part of Operation Magic Carpet in which it was tasked to transport back to the United States servicemen that were eligible for discharge.

In March 1947, the ship was placed out of active duty, but when the Korean war began it was brought back by the Navy on 23 December 1950. By May 1951, the Rockbridge became part of the Amphibious Force, United States Atlantic Fleet.

Beginning with the year of 1951 until 1968, the ship regularly participated in training exercises, for the most part in the United States but also in locations such as Puerto Rico and Cuba. In the same time period, the Rockbridge also took part in helping out the people affected by the earthquake in Greece in 1953. In 1959, the ship offered aid to the communities that were impacted by the flood. Additionally, the ship was ordered to contribute to operations related to the Cuban Missile Crisis in 1962, transporting reinforcement troops to Guantanamo Bay.

In November 1968, the USS Rockbridge was placed out of commission and in December it was taken off the Navy Registry list. The following year in May, the vessel was sold for scrapping.

Although asbestos fibers used to be poured into pretty much all types of building materials in order to offer additional strength to the compounds, the late 1970s brought about a ban on most of the uses of the mineral because the high toxicity of the substance that has been suspected for quite some time was finally confirmed by medical professionals. Thus, the realization is that fields that worked with massive amounts of asbestos, as the U.S. Navy, for instance, had people exposed to the toxic mineral for years.

With the outbreak of World War II, there was a need for a great number of ships and since asbestos was not only cheap but also acted as a great fireproofing substance, large quantities of it were used to construct entire sections of the vessels aside from using it to cover electrical wirings around the ship.

Asbestos becomes a threat to human health when it is lingering in the air in the form of fibers making it easier for people to inhale it. The tiny fibers can get stuck in the soft tissue surrounding the lungs, but it can also get caught around the abdomen or around the heart. Since the body cannot get rid of the foreign fibers on its own, they will usually irritate the internal organs until decades after the exposure had occurred cancerous tumors might develop.

Have You Been Exposed to Asbestos on the USS Rockbridge (APA-228)?

We could help you understand the kind of asbestos exposure that the people who served on the USS Rockbridge (APA-228) faced. We could also help you find your former shipmates. To learn more, call us at 760.621.6147.