The USS Rockingham was a Haskell-class attack transport. The main duties of the vessel were related to the transportation of troopship and invasion forces ashore.

The USS Rockingham mostly saw service during World War II, having been a part of the Asiatic-Pacific Campaign with distinguished achievements at the time of the attack and occupation of Okinawa Gunto, between 25 April and 5 May 1945. For its service during World War II, the ship was awarded one battle star, but it also received the Asiatic-Pacific Campaign Medal as well the Navy Occupation Service Medal bearing the Asia clasp. 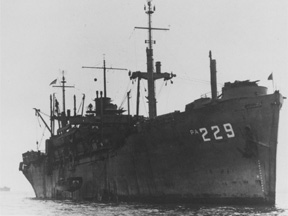 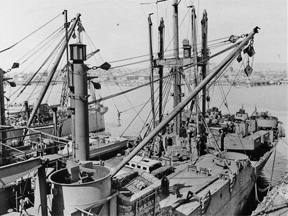 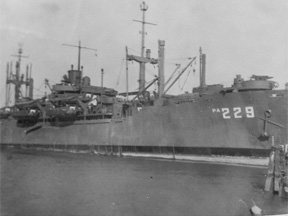 History of the USS Rockingham (APA-229)

The USS Rockingham was built by the Kaiser Shipbuilding Corporation in Vancouver, Washington. The vessel had Mrs. Lynn Norman Carlson as a sponsor and Commander Hans Hanley as commanding officer at its commissioning in November 1944. The ship sustained sea trials at Seattle, Washington and then further shakedown exercises at San Pedro in California. By February 1945, the Rockingham departed San Diego, California for Pearl Harbor to deliver cargo. In March, the vessel sailed to Eniwetok and Saipan while having more than 1,000 servicemen on board. The ship remained in the Marianas until 15 April when it was headed to Okinawa and Ulithi where it was to debark another 1,200 troopships and army personnel.

On the 26th of April, the Rockingham landed its troops at Okinawa and it was immediately drawn into the warfare atmosphere witnessing several kamikaze attacks, and even coming to the rescue of survivors. When the USS Terror had been crashed into by a suicide plane, the Rockingham ended up taking on board over 50 of their casualties. By May, the ship sailed in convoy to Ulithi, to Pearl Harbor and, eventually, to San Francisco. At the last location, the vessel loaded up on troops and left in June to transport them to Eniwetok, Ulithi and Manila.

The Rockingham made another return to San Francisco where it took on board more than 1,600 armed forces to carry to the very same locations. Upon arrival in the Philippines, the ship embarked 1,500 military forces to transport to Japan, after which it was ordered to stop by Leyte and Samar in order to bring the veterans there back to the United States. Continuing its transportation missions as part of Operation Magic Carpet, the Rockingham was to return to the Philippines once more to pick up servicemen, arriving at Los Angeles, California in December and joining Joint Task Force 1 to show support for the operations preparing for the atomic bomb testing. The ship was eventually dismissed from Operation Crossroads, which was the codename for the nuclear weapons testing conducted at Bikini Atoll in 1946. The ship was commanded to operate alongside the United States 19th Fleet.

The Rockingham was decommissioned in March 1947 and taken off the Navy Registry in October 1958. The ship is known to have been scrapped by a corporation in South Korea, having been completely removed from the records of the Maritime Administration by November 1979.

United States veterans that have served before the 1980s are highly likely to have been exposed for the time of their deployments to a toxic mineral called asbestos. It was mined across the whole of North America which meant it was easy to obtain. Due to the mineral being found virtually everywhere on the U.S. territory, it could also be acquired at low prices by manufacturers that would stack up on huge resources and find ways to promote its use in a variety of industries from construction to textiles.

The United States armed forces were also quick to incorporate the usage of asbestos into their plans. The Navy, especially, was interested in using the material as insulation since asbestos was chemically inert and resistant to intense rises in temperature.

In no time, all American Navy ships constructed prior to the 1980s were required to have their pipes and electrical wiring covered in insulation that was made entirely out of asbestos. As the ship was constantly in motion while it was sailing at sea, the insulation would crumble and create toxic dust that was inhaled by those assigned with correcting the issue.

Have You Been Exposed to Asbestos on the USS Rockingham (APA-229)?

We will gladly share our knowledge about how asbestos exposure occurred for decades in the U.S. Navy. We will also be happy to help you find your former shipmates. To learn more, contact us at 760-621-6147.