The USS Samuel Gompers (AD-37) was a destroyer tender. The main duties that had to be performed by a vessel in this class were in regard to offering maintenance support to other warships.

During its 28 years of service, the ship received numerous distinctions among which stand five Battle "E" Ribbons. 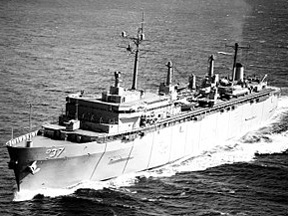 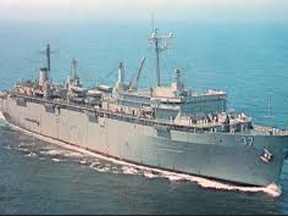 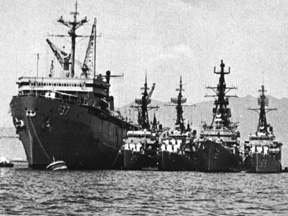 The USS Samuel Gompers (AD-37) was built by the Puget Sound Naval Shipyard, Bremerton, Washington. The ship was christened by Mrs. Joseph Holmes and when it was commissioned on 1 July 1967, Captain Harry Risch was assigned in command.

Between 28 August to 1 September 1967, the ship underwent verification trials in its homeport, San Diego, but never a proper shakedown cruise, which meant that the crew had to be alert at anything that could go wrong before its first deployment to western Pacific waters. Even without the reassurance of a shakedown, all inspections indicated that the ship was ready for sailing at sea.

In November 1967, the Samuel docked at Yokosuka, Japan where it immediately began doing repairing tasks for the units of the Pacific Fleet stationed in the area. In its first month on the task alone, the Samuel provided renovation services for over 50 vessels.

In January 1968, the Samuel Gompers left Yokosuka for Sasebo. The tensions in the Sea of Japan were rising due to the abduction of the USS Pueblo by North Korea. The ship was ordered to patrol the area in order to screen the response operations of the Pacific Fleet.

In November 1968, the Samuel Gompers left San Diego as part of Task Unit 15.8.2 with Subic Bay as its destination. The vessel provided supplies for other ships from the Task Unit three times during a single deployment.

Between December and May 1969, the Samuel Gompers was stationed in Subic Bay to provide repair services to other ships in transit.

By March 1970, Samuel Gompers was yet again leaving to tour the western Pacific. It was headed for Subic Bay where it stayed until July 1970. Next, the ship docked at Yokosuka, Japan, and then finally, on 13 September 1970, the ship returned to San Diego.

In its next deployment that lasted 9 months, the ship traveled to South Vietnam twice to assist ships operating there. During this tour, the vessel was nicknamed Fat Sam, standing for Fast Attack Tender, Samuel Gompers. The ship was the only repair vessel ordered into hostile waters during the Vietnam War, and by design had very few options of protecting itself which meant it was virtually defenseless in the face of enemy attack.

In 1978, the Samuel Gompers was dry-docked at Swan Island Shipyard, Portland, Oregon for technical changes targeting boilers and the fuel system.

In October 1978 the Samuel Gompers allowed for women to be a part of the crew for the first time, a practice that became more and more habitual in the following years with destroyer tenders and other non-combative vessels.

In 1984, the ship became the first one to have performed a major engine replacement during a deployment and not while stationed in a port but anchored off Oman in the Indian Ocean.

In 1988, the Samuel Gompers was sailing in the Gulf of Oman participating in Operation Earnest Will and in Operation Praying Mantis.

In October 1995, the ship was placed out of commission at Norfolk, Virginia and in July 2003, it was used as a target during an exercise and sunk during a practice session.

All throughout the 20th century until well into the 1970s, asbestos-based materials were heavily used in virtually everything that a construction job would encompass. Large amounts of asbestos were directed towards the Navy and shipbuilding sites for the mineral to be incorporated into anything from valves, gaskets or pipe insulation for hot water and steam pipes.

Suspected since the early 1930s, more and more medical records linked numerous cancerous diseases diagnosed in veterans to their exposure to asbestos decades prior to any symptoms showing. The asbestos fibers are toxic to humans, with the body having no way of expelling them once they have found their way inside the organism.

Not representing a danger if left untouched, when doing repair work or when replacing old equipment, the workers on deck would inevitably disturb the asbestos mixed in the objects they were focusing on and cause it to pollute the air, creating a hazardous environment for everyone on board.

Have You Been Exposed to Asbestos on the USS Samuel Gompers (AD-37)?

If you suffer from an asbestos-related illness and want to understand better how asbestos was used in the Navy, we can help you with elaborated knowledge on the topic. We can also put you in touch with your former shipmates. To learn more, call us at 760.621.6147.