The USS Sandoval (APA-194) was a Haskell-class Attack Transport. The ship was part of the United States Navy during World War II. Its duties were mostly focused on the transportation of troops from one combat area to another.

The vessel was the second in its class and while active on duty it endured quite the firepower. Most notably, perhaps, would be the 3 consecutive kamikaze attacks from May 1945 in the wake of which the ship was still standing. 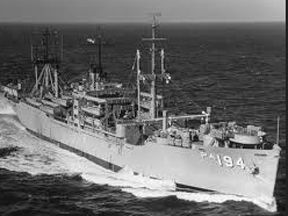 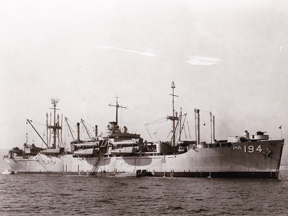 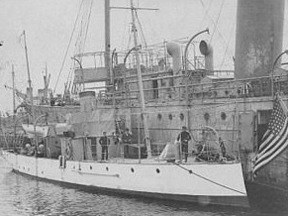 History of the USS Sandoval (APA-194)

The USS Sandoval was built by Kaiser Shipbuilding Co., Vancouver, Washington. With Mrs. Jack Crane as its sponsor, the ship was commissioned on 7 October 1944 with Commander R. C. Scherrer in command. As the month of October was coming to an end, the Sandoval embarked landing equipment while at San Francisco, California. Afterward, the ship sailed to Southern California in order to sustain shakedown preparations. By the middle of November, the vessel was preoccupied with the transportation of troops and cargo to Hawaii. There, the ship joined the squadron it belonged to, Transport Squadron 16. The ship was engaged in amphibious training while having onboard 3rd Battalion, 27th Regiment and 5th Marine Division.

On 27 January 1945, the Sandoval was headed toward Iwo Jima by taking the route of Saipan. It arrived at Iwo Jima on 19 February 1945 and it immediately dropped off the troops onboard. Several times when the ship disembarked on what was known as the "Red Beach", both the vessel and personnel were damaged slightly by mortar fire. For the following days, the ship kept a watch on the area. On 27 February 1945, the vessel distributed its remaining provisions to other ships in the zone and accompanied task unit TU 51.16.7, which was going back to Saipan. At Tulagi, the ship had its damaged landing craft finally replaced. On 10 March 1945, the Sandoval was docked at the Hagushi beaches of Okinawa where it disembarked other reinforcement troops. On the 19th, the ship left in order to board even more men and equipment for the Okinawa deployment.

On May 23rd, the Sandoval steamed to the Ryukyus, transporting units of the naval construction battalion, better known as Seabees. Four days later it arrived at Nakagusuku Bay during an ongoing air attack. The ship followed its own agenda and started the process of offloading, even if it was continuously interrupted by other raids. The very next day, on the 28th, while still engaged in offloading, the Japanese air raid resumed more aggressively. That is when the Sandoval retaliated by opening fire.

However, the ship was damaged quite a bit by the Japanese, since it was under the attack of 3 kamikaze aircrafts, the first of which was the most destructive because it struck the portside of the wheelhouse. As a result of the initial impact, 5 people were killed and 29 others were injured, of which 3 would later on die. The ship temporarily lost radar and interior communications because of the crash, a fact that had everyone on deck on high alert as the second kamikaze attack happened, and then the third one, that aimed for the Sandoval but hit the USS Joseph Snelling instead. About an hour after the first attack, the fire had already been put out and control of the ship had been regained, with repairs having started just as the interaction ended. It was 2 days later that restoration was completed and the Seabee crew was finally dropped off. The ship then sailed to Saipan, then briefly to Pearl Harbor, and then it arrived at San Francisco, California.

The Sandoval continued to transport occupation troops that it discharged first at Leyte and then at Luzon and Yokohama, all in support of the occupation of Japan. The Sandoval ultimately participated in "?Operation Magic Carpet" by carrying men back to the United States. On 19 July 1946, the ship began its first decommissioning process at Stockton, California. Because the war had started again in the Far East, the Sandoval was ordered to duty after 5 years of being inactive. The vessel was recommissioned on 22 September 1951, when it assisted the Pacific Fleet's Amphibious Force in their Korean operations.

The Sandoval was implicated in the actions surrounding the prisoner of war riots, otherwise known as POW, which is why it transported troops to Koje Do, a South Korean city. The ship continued to train, engaged in amphibious exercises, while sailing back and forth between the Philippines and Hong Kong. In August 1952, the Sandoval steamed back to the United States and docked at Long Beach, California where it underwent a long overhaul that only ended in February the next year. By the time spring came, the ship had already resumed activity in Southern California.

In 1953, the Sandoval transported prisoners of war located in the islands to the Korean mainland. For the rest of its deployment in the Western Pacific Ocean, the ship went back to Japan to which it carried cargo. It also engaged in training exercises in the waters around Japan, but also Korea and Okinawa. In 1954, the Sandoval had returned to California where it was to be released of active duty. However, on 1 September 1961, the Sandoval was once again put on the Navy list and, thus, began another commissioning process on 20 November 1961. The ship was under the command of the US Atlantic Fleet. It joined the amphibious forces of the fleet on 17 January 1962, and then it started operating just out of Norfolk, Virginia.

The Sandoval kept preparing throughout the summer, especially alongside the US Marine Corps units, sailing the coasts of Virginia and Carolina, but also Puerto Rico. Sandoval transported both army members and vehicles from Norfolk to the Panama Canal Zone. It was also responsible for carrying vehicles of the Marine Corps from Puerto Rico to Norfolk. When the Cuban Missile Crisis occurred in 1962, the Sandoval transported marines from North Carolina to the conflict area to be prepared for an intervention should the circumstances require it. It would be only at the end of November, when tensions decreased, that the Sandoval got the chance to go back to Norfolk where it was docked into the new year, 1963, and only occasionally engaged in training exercises. As the end of summer approached, the ship underwent preparations for the first tour alongside the US Sixth Fleet. The Sandoval was deployed in the Mediterranean for a period of 5 months at the end of which it went back to Norfolk and served with Amphibious Squadron 10.

In 1964, the ship took part in Operation Steel Pike which to this day remains the largest landing exercise that has taken place in the Atlantic waters since World War II. On 14 August 1964, the Sandoval had its label changed to LPA-194. In the following period, the Sandoval alternated between missions with PhibRon 10 and PhibRon 6 in the Mediterranean, while it was standing by, prepared for intervention with the Sixth Fleet, as the Arab-Israeli war was developing in 1967. In December 1968, the Sandoval contributed as a unit of the Navy's Manned Spacecraft Recovery Force in order to offer support for Apollo 8. On 19 March 1969, the ship departed with the Sixth Fleet for what was the last time. Together, they participated in NATO training exercises. On 3 March 1970, the ship was decommissioned and it was stationed at the Inactive Ship Maintenance Facility, Norfolk. On December 1st, 1976, the Sandoval was taken off the Navy list, and in 1983 it is said it was to be disposed of by the United States Maritime Administration, however, its fate remains unknown.

Even if the Surgeon General of the US Navy himself thought it was important to discuss in his annual report from 1939 that which he referred to in the piece as the "Hazards of Asbestosis" observed by him at the New York Navy Yard, the Navy personnel above him in command did not give his worries a second glance. It did not matter that the Surgeon General presented compelling evidence to support his professional views, his arguments and his study were ignored by most that had the power to change anything.

When asbestos fibers, that were the base of mixtures from which many ship parts and equipment on deck were made, inevitably became worn out or were disturbed from their initial compound state in some way, they were unavoidably dissipated into the air. When inhaled, the fibers attach themselves to the soft tissue of the lungs and are never expelled by the organism. Constant inhalation leads to accumulating dangerous amounts of toxic substance in the body which increases the risk of developing a number of grave cancerous conditions.

People that served in the Navy were exposed to asbestos in more than one way, but the risks are especially high for those that have been involved in the construction, renovation or the dismantling of thousands of ships made of the poisonous mineral.

Have You Been Exposed to Asbestos on the USS Sandoval (APA-194)?

We can assist you in discovering more about what significance asbestos has in relation to the US Navy. We can also help you get in touch with your former shipmates. For more information, call us at 760.621.6147.