The USS Saratoga (CVA-60) was a Forrestal-class aircraft carrier. The inspiration for the name of the vessel goes back to the Battle of Saratoga that occurred in the American Revolutionary War.

The ship filled the role of a remote airbase having the capabilities to provide repairs, supplies and shelter for aircraft at sea. One of the most notable deployments of the ship was its involvement in the Vietnam War, the vessel having been awarded one battle star for its efforts in the combat zone. 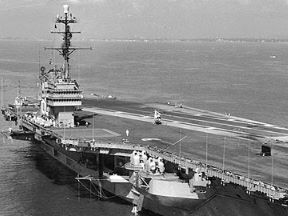 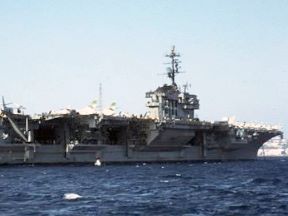 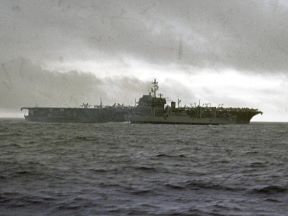 History of the USS Saratoga (CVA-60)

The USS Saratoga was built by the New York Naval Shipyard in Brooklyn, New York, initially under the CVB-60 designation, but later it was reclassified as an attack aircraft carrier CVA-60. The ship had Mrs. Charles S. Thomas as a sponsor and Captain Robert Joseph Stroh commanding on its commissioning day on 14 April 1956.

In the following few months, the vessel had to test various equipment at sea and completed a successful shakedown tour to Guantanamo Bay. In June 1957, President Dwight D. Eisenhower was on board to oversee several demonstrations by the Saratoga and other vessels.

In January 1961, as the ship was operating with the 6th Fleet, a fire erupted on board killing seven crew members. The incident was caused by a broken fuel oil line and while servicemen managed to give a few minor repairs to the ship, it had to return to the U.S. to be properly attended.

The Saratoga was ordered to the eastern Mediterranean to support the American forces in keeping a watch on the 1967 Arab-Israeli war. As it was returning to the U.S. in December, the ship was heavily damaged by rough conditions at sea.

In January 1968, the Saratoga entered the Philadelphia Naval Shipyard for an overhaul that lasted 11 months in order to have its systems modernized. In May 1969, the ship hosted President Richard Nixon during the festivities put together for the Armed Forces Day in the waters of the Virginia Capes.

In July, the Saratoga left for the Mediterranean once more and joined Task Group 60.2 of the 6th Fleet along which it operated in the face of conflicts linked to armed forces from Syria and Libya.

In April 1972, the vessel was on its way to the conflict zone in Vietnam, reaching the Yankee Station in May. By June, the Saratoga was reclassified as a multi-purpose aircraft carrier CV-60. Between 2 and 19 September, the vessel's aircraft had dropped more than 800 strikes against military targets in North Vietnam.

In 1975, the ship participated in Locked Gate 75, an operation coordinated by NATO as a way to keep a watch on the activities of the Portuguese Communist Party in Portugal just after the Carnation Revolution had occurred.

In the month of September 1980, the ship had come back from another deployment in the Mediterranean and entered the Philadelphia Naval Shipyard where it received the most expensive overhaul that has been done on a Navy ship, having been the first vessel to undergo a Service Life Extension Program (SLEP) overhaul, emerging from it with a new nickname suggesting its imposing status, "Super Sara".

The ship was a part of Operation Desert Storm, mainly conducting missions in the area of the Red Sea, having been involved in about 11,000 aircraft launch and recovery operations.

The USS Saratoga was placed out of commission at the Naval Station in Mayport, Florida in August 1994 and, simultaneously, it was taken off the Navy Registry. News in May 2014 broke that SteelCoast, formerly known as ESCO Marine, in Brownsville, Texas would scrap the ship for the sum of one cent, which was the minimum that could have been agreed on performing the scrapping for the vessel.

As all the Navy ships built in the first half of the 20th century, the USS Saratoga (CVA-60) contained enormous amounts of asbestos in the materials from which it was constructed, meaning that the toxic mineral was embedded even in the walls and in the flooring.

Additionally, because the substance is a fire retardant, it was ordered for it to be used as insulation for essentially the entire electrical system on board.

Furthermore, the mineral was also to be found in the equipment on the ship, especially in the one that was tied to the areas below the deck, threatening the personnel that would be tasked with tending to the engines and the boilers but also technicians and machinists in general. While it is true that asbestos is not to be considered a risk when encased in a compound, it was highly dangerous when it became airborne which would happen regularly when the ship was active on duty due to the vibration of its movement at sea.

In some instances, as it occurred in the case of the USS Saratoga, accidents might lead to massive amounts of asbestos being disturbed and released into the air, such it was the case with the 1960 collision with another ship or with the 1961 fire that erupted in the machinery room.

Aside from its grave outcome, the most treacherous aspect of asbestos-related diseases is that they usually have a decades-long period of latency and because they do not show any clear-cut symptoms, it has often been the case for the illnesses to be misdiagnosed a few times before actually being discovered for what they were.

Have You Been Exposed to Asbestos on the USS Saratoga (CVA-60)?

We can help you reach out to your former colleagues. We can also assist you with more information about the kind of asbestos exposure that occurred on the USS Saratoga (CVA-60). To learn more, call us at 760-621-6147.