The USS Shasta (AE-6) was a Lassen-class ammunition ship. The principal occupations of the USS Shasta were to safely and timely transport ammunition.

The name of the vessel was inspired by Mount Shasta, which is a volcano in the north part of California, United States. As honorable recognition for its work, the USS Shasta was awarded five battle stars for service during World War II and one for its actions during the Korean War. 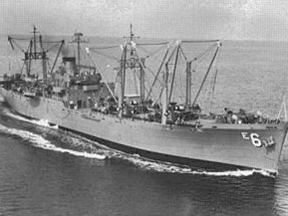 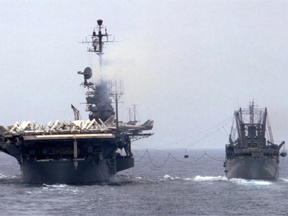 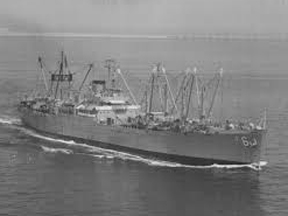 History of the USS Shasta (AE-6)

The Shasta was built by the Tampa Shipbuilding Company, Tampa, Florida with Mrs. Spessard L. Holland as its sponsor. The ship was commissioned on 20 January 1942 with Captain Francis A. Smith commanding.

In November 1942, the Shasta left Alameda, California and steamed to Noumea, New Caledonia. The vessel visited numerous islands and re-armed ships of the Battle Fleet. Shasta mainly supported operations involving the Gilbert Islands, the Mariana Islands, the Palau Islands and the Philippines.

In February 1945, the Shasta succeeded in its first underway arming. In the same year, the ship was supplying with armament warships that had tasks related to the attack on Iwo Jima, with the vessel continuously unloading cargo while being under constant Japanese bomb attacks. On 5 June 1945, the Shasta was caught by the tremendous force of fourteen winds caused by a typhoon South East of Okinawa. Even if the ship was greatly damaged, it still completed its re-arming mission. The typhoon in question actually sank three destroyers and caused serious damages to other nine. The USS Shasta also managed to escape kamikaze Japanese plane attacks while at Ulithi. At the end of the war, the Shasta was transporting cargo from Victory vessels. It docked at Leyte Gulf until October 1945, when it departed for Puget Sound Naval Shipyard. Upon arrival, the Shasta was decommissioned at San Diego in August 1946.

The Shasta was commissioned again on 15 July 1953 with Captain Peter M. Gaviglio in command. The ship left San Diego on 26 November 1953 to accompany the Atlantic Service Fleet at Norfolk. While at Norfolk, the vessel underwent repairs and modernization after which it was headed to Newport, Rhode Island for shakedown training.

In January, the ship departed for the Mediterranean for the first time, and for the following eleven years, the vessel participated either in Atlantic seaboard operations or in support of the 6th Fleet. The Shasta was providing ammunition to the Marines when the Jordanian crisis happened in May 1957, but also at the time of the Lebanese crisis in August 1958. In June 1959, Shasta was part of the testing of what was referred to as "Project Phoenix," which was a new torpedo counter-measure. One last visit to the Far East occurred during the period of September 1966 and April 1967. On 8 June 1967, when the Shasta arrived at its homeport in Norfolk, the ship had just completed her first and only journey around the globe.

On its last assignment in Rote, Spain, the Shasta alongside the 6th Fleet was on the search of the missing nuclear submarine, the USS Scorpion (SSN-589) which ended up being unsuccessful. Although the Shasta was supposed to be on deployment for a six-month period, the ship had to steam back to Norfolk for extensive reparations to be done. However, the restorations were never completed, which led to the Shasta being taken off the Navy Register on 1 July 1969. In March 1970, the ship was sold for scrapping to a Spanish company.

Asbestos is a toxic mineral that becomes a threat to one's health when it is released in the air in the form of fiber contaminating breathing areas. If left undisturbed in whatever compound it is a part of then it is less likely to be dangerous to anyone.

Still, even so, asbestos-embedded products deteriorate over time and the fiber ends up filling the air. Such was the case onboard of ships that had asbestos-containing equipment all around that could have been left untouched because it required regular repairing and maintenance.

Navy crew working with or around boilers, pipes and pumps, oil burners, turbines and other objects containing high amounts of asbestos was exposed to the toxic material unaware of the dangers. As a consequence, they are highly at risk of developing asbestos-related cancerous diseases. In fact, a large part of patients diagnosed with mesothelioma, which is a rare form of cancer proved to be caused by asbestos are veterans.

Have You Been Exposed to Asbestos on the USS Shasta (AE-6)?

We can help you learn more about the ways in which asbestos was used in ship making and maintenance. We can also help you find your former shipmates. Call us at 760.621.6147 for more information.