USS Shenandoah (AD-26) was a Shenandoah-class destroyer tender. The vessel was the third ship named after the Shenandoah River, and it was the result of a project that began at the end of World War II.

The USS Shenandoah (AD-26) is notoriously known for frequently and successfully engaging in quite heroic activities at sea. In the year of 1964, the naval vessel received international recognition after a bold last-minute rescue of the crew from a Dutch merchant ship. 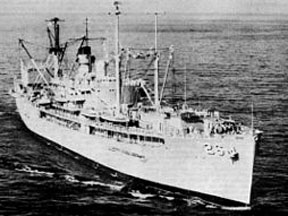 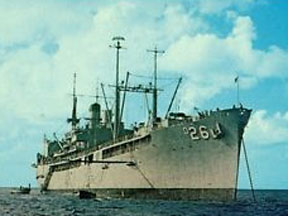 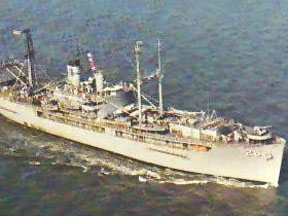 History of the USS Shenandoah (AD-26)

The USS Shenandoah (AD-26) was laid down on 16 September 1944 by Todd Pacific Shipyards, Inc. of Tacoma, Washington. The naval vessel was launched on 29 March 1945 having Mrs. Daniel Hunt as its sponsor, and by 13 August 1945, it was commissioned with Capt. Albert C. Burrows in command.

Taking the route of the Panama Canal, the ship departed to the East Coast to be of service to the Destroyer Forces of the United States Atlantic Fleet in the month of January 1946. The Shenandoah provided aid to destroyers in many different ports from the East Coast, but especially in her home area, which was Norfolk, Virginia until June 1947. From June to August 1947, the vessel had departed in its first tour of operations, accompanying the 6th Fleet. Over the course of the following 20 years, the Shenandoah had to report for duty on 13 tours across the Mediterranean Sea.

Adequately completing mission after mission led to the ship being awarded the Armed Forces Expeditionary Medal in Lebanon in 1958. Perhaps the most memorable intervention happened in 1964 when the Shenandoah was applauded internationally for having saved the lives of a Dutch crew from a merchant ship that has rolled over and sunk minutes after the people were brought to safety. It was quite the movie scenario, with the freighter having lost control during a storm and hitting the rocks from the harbor in San Vincenzo in Naples. The Shenandoah arrived just in time to rescue everyone. The public's admiration for the destroyer tender continued to build as in 1965 the ship intervened in the process of repairing the bow of an aircraft carrier USS Shangri-La (CV-38) that, during unfocused maneuvers, had collided with another destroyer.

The ship's accomplishments in destroyer maintenance had won it the Battle Efficiency Pennant, particularly for its activities from 1952 and 1956. The ship was also awarded the Meritorious Unit Commendation in 1970, the Engineering "E" in 1958 and 1965, and the Supply "E" in 1962, 1963 and 1967. In 1968, 1970 and 1973, the Shenandoah yet again briefly served alongside the 6th Fleet. By December it returned to her home port, and in July 1974 while docked at Norfolk, Virginia, the vessel was looking after ships in the East Coast waters.

On April 1st, 1980 the Shenandoah was decommissioned at Naval Station Norfolk and in the same day it was taken out of the Naval Register. The ship was transferred to the Maritime Administration, and from there it was sold for scrapping.

Back in the day, asbestos, a type of mineral used in construction particularly for its insulant qualities, paved the way for industries to become giants in their respective domains. The fact that the material was cheap and easy to access attracted everybody looking to make a profit. Businesses were growing. Employers were thriving. The average person would be able to find work rather quickly.

The ominous side of the story was regrettably silenced. Even then, in the relatively near past, studies were circulating warning about the threatening effects asbestos could have in relation to humans. However, any attempts at making the public aware, which was the main issue at the time, were left with no echo, since no big entities would stand by this kind of speculations in order for the information to gain traction and credibility. Understandingly so, no corporation would jump at the chance to rob itself of significant earnings.

Sadly, the comfort of the few has been paid by many. To this day people that have been involved in construction work or in the Navy are confronted with the consequences of having been in contact with a highly toxic substance. From the pipes to most below-deck areas in the case of vessels and even in the very walls where personnel would be sleeping, there was no escape from apparatus containing asbestos. If you suffer an illness related to asbestos exposure or have knowledge of someone that does, you should consider discussing your case with a legal expert to recover damages.

Have You Been Exposed to Asbestos on the USS Shenandoah (AD-26)?