The USS Sierra (AD-18) was a Dixie Class Destroyer Tender. The ship was active in the US Navy from the time of World War II to the 1990s.

In 1979, the USS Sierra (AD-18) was awarded the Humanitarian Medal after the crew helped the city of Mobile, Alabama with its renovation work in the wake of the wreckage suffered after having been hit by Hurricane Frederic. 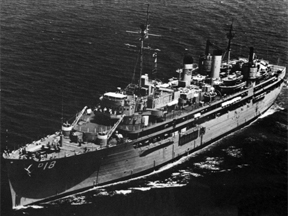 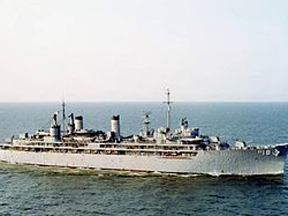 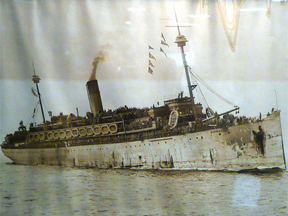 The USS Sierra (AD-18) was the second ship of its type. It was built by the Tampa Shipbuilding Company of Tampa, Florida, and on March 20th, 1944 it was commissioned with Captain P.B. Koonce in command. On April 13th the ship departed to Hampton Roads, Virginia where it arrived on the 18th of April. The following day, in the area of Chesapeake Bay, the Sierra started a period of preparation that lasted 10 days, working under simulated conditions before entering service.

On the 18th of May, the vessel was headed toward San Diego, California by taking the route of the Panama Canal. After a 5-day stay in San Diego, the ship sailed for Pearl Harbor on June 7th. From the 13th of June to the 3rd of September 1944, the Sierra offered maintenance services to the destroyers in the Pearl Harbor area.

Until February 1945, the USS Sierra was accompanying the US Third Fleet, and among the most notable operations performed by the ship were the replacement of a 5-inch gun mount on the USS California (BB-44) warship and the rebuilding of the starboard stern of the USS Claxton (DD-571) destroyer after the latter one had been seriously impacted by a kamikaze.

On February 18th, the ship was on its way to Purvis Bay, Solomon Islands. The Sierra tended to a fleet of tank landing ships in order to prepare the attack on Iwo Jima, and on the 15th of March, the vessel sailed to Ulithi, Caroline Islands. The Sierra was on duty there until May 25th when it left for San Pedro Bay, Philippines.

The USS Sierra was in the process of renovating destroyers, and other support ships as well, in anticipation of the American invasion of the Japanese shore. However, August 15th, 1945 brought along the end of hostilities with Japan, which meant that those projects were left undeveloped. Sierra sailed from Shanghai to San Francisco, California on the 6th of February 1946. The vessel was attached to the United States Sixth Fleet in the Mediterranean Sea to support the USS Shenandoah (AD-26) destroyer tender in 1950. The following year, in 1951, the Sierra was on duty alongside the Sixth Fleet a second time.

The USS Sierra was assigned as flagship for Commander Destroyer Flotilla 4, and then for the Commander Cruiser Destroyer Flotilla 4 on July 1st, 1962. Until 1956, the ship was actively trying to deliver to an overwhelming demand for repairs needed by destroyers in the Norfolk area. Only on two occasions it was necessary for the vessel to leave its assigned line of duty, from January 6th to March 2nd, and then from November 9th and December 4th, 1953 when Operation Springboard was in immediate need of the services of the ship.

After joining the US Sixth Fleet in the Mediterranean for the third time in 1951, the Sierra went back to Norfolk on December 13th. From October to December 1961, the ship sailed to Guantanamo Bay, Cuba in order to provide help to the training ships that were called to duty during the Berlin Wall Crisis. On the 27th of March 1962, the Sierra sustained conversion as part of the FRAM II program. The ship resumed its normal activities on September 15th. In 1974, the USS Sierra departed to Charleston, South Carolina and it is there that it would stay for a few years, leaving only on two occasions: in 1977, and then 1978 to 1979 when it sailed to mainland Spain, Majorca, Sicily, mainland Italy and, lastly, the French Riviera. In 1979, in the months while they were dry docked, helping the people Mobile, Alabama, shipmates did a retrofit. They removed all of the asbestos, red lead paint and all of the other hazardous materials from the ship. While doing this, many workers were exposed as they did not have adequate protective gear.

The USS Sierra was decommissioned on October 15th, 1993 and it was sold for scrapping. The ship was the oldest vessel on active duty, which led to it carrying the flag reading "Don't Tread on Me" as a proud statement in regard to its status.

Affordable and easy to obtain, asbestos turned the businesses from the beginning of the 20th century into seemingly unstoppable giants. The economy of the time was welcomed by business owners and workers alike, since it appeared to be based on an ideal business model: making use of a cheap and readily accessible mineral that does the job well.

It comes as no surprise then that a material that acted like an undefeatable electrical insulator and manifested powerful resistance to high temperatures was incorporated as often as possible in various domains of industries and in large amounts, as it was not scarce by any means. The textile industry and the Navy were among the fields that used asbestos for virtually everything.

Links connecting asbestos to cancerous diseases were discovered right as the mineral was establishing itself as the savior everybody needed, which meant that the voices condemning its use had no productive echo. Ship personnel, for instance, would touch and breathe in highly toxic equipment made from asbestos materials as part of their daily routine, unsuspecting of it being a grave threat to their health in the future to come. A veteran that worked on removing the asbestos from this ship has said that symptoms have appeared even after such a long time. He has said that "it is very difficult to breathe in humid conditions" and that he "runs out of breath very often."

We have the testimonial of a former shipmate, who served on the USS Sierra as a welder: "I've been a welder; we've cut out all the asbestos insulation off the piping that we had to repair. We used to sleep under the blanket for cover-up. I have neck pain and I don't know what's going on in my thoracic area with my spine you know sometimes like right now it's hurting real bad. I coughs a lot sometimes you know to get the dryness out of the throat."

Have You Been Exposed to Asbestos on the USS Sierra (AD-18)?

"Working in the fire room of this destroyer ship meant dealing with asbestos. You couldn't avoid it. Anyone working in the boiler room was exposed to the fibers; they were present everywhere and in large quantities because asbestos did a great job at insulating the boiler room. There was no protective equipment back then as there is now. You didn't get any mask or face cover, you couldn't avoid inhaling asbestos and you were working with your bare hands. I am 72 now and I often experience cough, especially at night, after all those years of work surrounded by asbestos." - Daryl B.

We can help you make better sense of your personal experience with asbestos. If you want to take the case to court in order to recover damages, we can help you find a specialized asbestos lawyer to assist you through the process. Call us at 760.621.6147 for more information.