The USS Skagit (AKA-105) was a Tolland-class attack cargo.

The vessel was on active service for more than two decades.

The main duties of the USS Skagit were the transportations of troops and armament in support of other ships.

The vessel participated in operations during World War II, the Korean War, and the Vietnam War.

Technical Features of the USS Skagit (AKA-105) 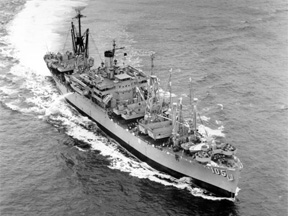 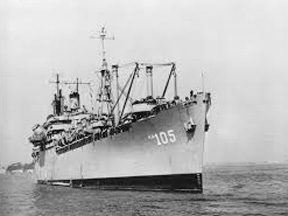 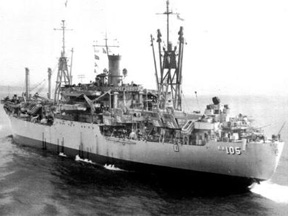 The USS Skagit was built by North Carolina Shipbuilding Company, Wilmington, North Carolina. Miss Heloise Pike was the sponsor of the ship and on 2 May 1945, Captain Harold R. Parker was assigned in command.

After undergoing shakedown, the Skagit steamed to Marseille, France in June 1945 to load troops and armament to carry to Manila, Philippines. On 15 August 1945, the ship docked at Manila to unload its cargo while at the same time reloading with passengers and supplies for its next destination, Tokyo. On 2 September 1945, when Japan surrendered, the Skagit was present in Tokyo Bay for the ceremony.

For what was left of the year, the Skagit transported both troops and supplies to bases located in the Far East, the most common ones being Guam, Okinawa, Shanghai, Tientsin and Tsingtao. The deployment in the Far East was briefly interrupted for a three-month tour to Pearl Harbor. In February 1947, the Skagit was back to sailing Far East waters, being involved in operations between Guam, Okinawa and China.

In 1948, the Skagit was ordered a polar expedition, and on 26 July that year, the ship left for Alaska where it was docked until 23 August. The ship would participate in another expedition to Alaska the following year, 1949, from January to February.

On 30 June, the ship was decommissioned at San Francisco. However, when North Korea invaded South Korea on 25 June 1950, the response on the American side was to re-activate many of the ships that were placed out of commission in order to keep up with the operations in the Far East. Thus, on 26 August 1950, the Skagit was re-commissioned and immediately started shakedown at San Diego.

In March 1951, the ship was headed to Pusan, South Korea to land troops and cargo. Afterward, the Skagit was engaged in exercises with units of the 40th Division at Yokosuka.

In 1952, the vessel was yet again on tour in the Far East from May to December. The focus of the operations there was setting up another camp for prisoners of war at Yongcho Do and Pongnam Do, as a consequence of the riots that took place at Koje Do. The Skagit offered help in transporting building materials, but also in transporting prisoners.

In 1954, the ship took part in Operation Passage to Freedom during which it transported almost 5,000 refugees from North Korea to safe locations from South Korea, away from the communist threat. For the next decade, the Skagit operated between the western Pacific and ports from Mexico or Alaska. From August 1965 to May 1966, the ship was sailing Far East waters to honor the commitment of the United States in helping South Vietnam at defending itself. The Skagit operated as a part of Task Group 76.6 while Operation Double Eagle was ongoing. 5,000 U.S. Marine Corps had to confront the Viet Cong.

On 25 October 1966, the Skagit was stationed at Todd Shipyard, San Pedro, California to complete overhaul. By May, the ship was already on a seven-month deployment to the western Pacific.

In April 1969, the Skagit was commanded out of commission, and in July 1969 the process of decommissioning finally began with the ship being taken off the Navy Register and transported to the Maritime Administration.

Asbestos Risks on the USS Skagit (AKA-105)

For the most part of the 20th century, the day-to-day lives of hundreds of thousands of people serving in the Navy took place in the narrow work environment usually offered by working on a vessel. Various machinery had to be tended to regularly and equipment had to be kept in check for the good functioning of the ship.

Unknown to the sailors on board was the fact that a large number of the apparatus they came in contact with on a daily basis contained asbestos, a mineral linked to a few types of cancers. The reason for such a grave sentence associated with asbestos is that should the fiber be inhaled, the body cannot eliminate it, which means that it will keep irritating the organs, with the lungs being the most common case.

When considering the levels of asbestos exposure on a ship, the most damaging places were the boiler and engineering rooms, however, asbestos mixtures were also used to build items such as condensers, turbines, valves, pumps that required constant supervision which meant that sailors were in the presence of the toxic substance at all times.

Have You Been Exposed to Asbestos on the USS Skagit (AKA-105)?

If you would like to know more, we can help you with extensive information about asbestos in the U.S. Navy. We can also put you in touch with your former shipmates. Call us at 760.621.6147 to learn more.