The USS Telfair (APA-210) was a Haskell-class attack transport. The principal type of operation required from a ship such as this one was ensuring the transportation of troopship.

The USS Telfair mostly conducted missions during World War II and during the Korean War, earning a total of four battle stars for both of them. However, the ship was active and involved in peacetime sea missions as well, especially during the 1960s. 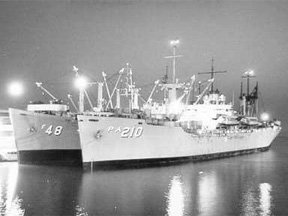 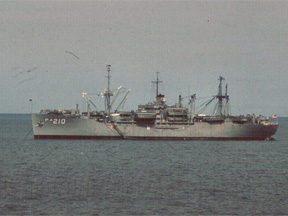 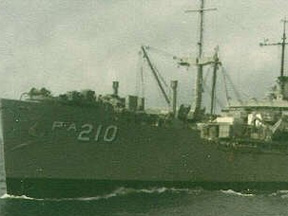 The USS Telfair was built by Permanente Metals Corporation, Richmond, California. The ship was placed in commission on 31 October 1944 with Commander Lyle O. Armel as commanding officer and Mrs. J. L. Cauthorn as its sponsor. After completing shakedown training, the ship sailed to San Francisco in order to embark armed forces and artillery for its first official deployment. By January 1945, the vessel had on board units of the 111th Infantry that it eventually dropped at Peleliu. The Telfair then sailed to Leyte where it arrived in February in preparation of the American attack on the Ryukyus.

In March 1945, the Telfair had forces of the 77th Division embarked in anticipation of the invasion of Okinawa. The ship was ordered to join other vessels in securing the surroundings of Kerama Retto, a group of islands in the vicinity of Okinawa. As it happened, that particular area was the first one to see conflict as the assault on Okinawa began. Until 2 April 1945, the Telfair supported the occupation of Kerama Retto. In the evening of that day, the Telfair and the entire task group it operated along with got attacked by 10 kamikazes. As a result, the ship sailed the waters near Okinawa a little longer until 26 April. By 30 April, the vessel was stationed at Ulithi in the West Carolines for reparations. After undergoing modifications that would ensure its safe return to the United States, the ship departed for Seattle, Washington, where it disembarked troopship and then underwent a proper overhaul.

After completing repairs, the ship left Puget Sound Naval Shipyard and by July 1945, transporting hospital servicemen to Saipan. During the rest of the summer, the ship sailed alternately to Luzon and Leyte in the Philippines area. In October 1945, the Telfair left the Lingayen Gulf in order to carry troops on the Japanese shore. At the end of the month, Telfair took part in Operation Magic Carpet. While at Samar, in the Philippines, the ship loaded veterans to carry them back to the United States. For three months at the beginning of 1946, the vessel was conducting missions in the Philippines once more, making port visits at Subic Bay and at Samar. In July 1946, the ship was placed out of commission at Stockton Group, California. When in June 1950 North Korea attacked the Republic of Korea, the Telfair was ordered back into active duty. The ship was commissioned again on 12 September 1950, and it reported to the U.S. Pacific Fleet. During the conflict in Korea that lasted from June 1950 to July 1953, the Telfair deployed to the combat zone three times. In the first tour, from October 1950 until July 1951, the vessel carried troops from Japan to Korea, in its second one, January 1952 to May 1952, the Telfair alternated between Kobe, Okinawa, Sasebo and Yokosuka in order to oversee the training of the units of the United Nations. In its last tour, October 1952 to April 1953, the ship sailed to Japanese and Korean ports transporting forces.

The Telfair was deployed to the western Pacific three more time from August 1953 to February 1958, with its service mostly focused on bringing back to America servicemen that were involved in the operations in Korea. When the ship was not engaged in a transportation mission, it underwent exercises with the 7th Fleet. In August 1954, the Telfair took part in Operation Passage to Freedom and was among the ships that helped with the evacuation of refugees from communist North Vietnam to South Vietnam that later became the Republic of Vietnam. In October 1964, the vessel took part in operation Steel Pike conducted by the United States Navy and Marine Corps. Beginning with 1968, the ship operated alongside the 6th Fleet in the Mediterranean often training in multinational exercises, and it also reported to the 2nd Fleet in the western Atlantic, specifically in the Caribbean and in the Gulf of Mexico. In October 1968, the Telfair was placed out of commission and sold to the Boston Metals Company, Baltimore, Maryland.

With the outbreak of World War II, the U.S. military and in particular the Navy made use of enormous amounts of asbestos that were directed especially toward the construction of ships. Regarding the building of vessels, asbestos-based materials were considered ideal due to their capabilities of being resistant to fire. Thus, on board of a ship, one would find insulation, flooring and tiles and even wall panels made of mixtures containing asbestos. The mineral was cheap, easy to handle and widely available since it was heavily mined in North America.

From the 1930s until the 1970s, shipyards and shipbuilding companies did construction, repair and renovation work using asbestos in nearly everything on deck. The servicemen that were most exposed to the toxicity of asbestos were those that had to work jobs that required them to spend long hours in the poorly ventilated spaces from below the deck. Any kind of disturbance of the equipment that contained asbestos as a result of reparations or deterioration would release asbestos dust, putting all the personnel at risk as the fibers lingered in the air.

Have You Been Exposed to Asbestos on the USS Telfair (APA-210)?

We can help you learn more about the usage of asbestos in the U.S. Navy and we can also help you find your former shipmates. Call us at 760.621.6147 for more information.