The USS Thuban (AKA-19) was an Andromeda-class attack cargo ship. The vessel was named after the main star that is part of the constellation Draco, carrying important religious and historical significance due to it having been the pole star in ancient Egypt. The fundamental duties of the USS Thuban (AKA-19) were to transport both troops and supplies, and especially heavy equipment with the intention of offering assistance to amphibious assault vessels. The ship also provided gunfire during combat.

Technical Features of the USS Thuban (AKA-19) 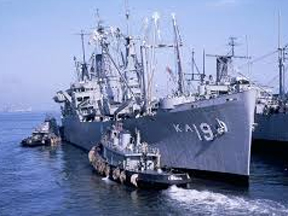 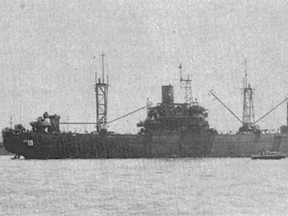 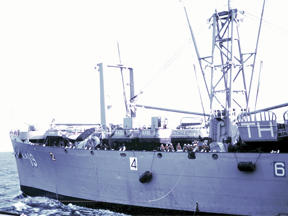 History of the USS Thuban (AKA-19)

The USS Thuban was built by the Federal Shipbuilding and Drydock Co. and it was commissioned on 10 June 1943 at the Brooklyn Navy Yard with Miss Madeleine Carroll as its sponsor and with Commander James C. Campbell in command. After a week of undergoing testing exercises, the ship left Norfolk and headed toward the Panama Canal. It continued to steam to California, arriving in San Diego where further training took place. On 22 July 1943, the Thuban was stationed at Oakland in order to load cargo to prepare for the attack on the Aleutian Islands that were under Japanese occupation.

On 15 August 1943, the vessel reached Quisling Cove, Kiska and began getting ready to add to the offensive strategy carried against the Japanese, but at the time nothing came out of the attempt. As September came about, the Thuban departed south and on 6 September 1943, it arrived in San Diego. On 22 September 1943, the ship arrived in Pearl Harbor where it loaded cargo. On 8 October, the ship reached its destination at Funafuti and unloaded the contents. The Thuban docked at Wellington Bay, New Zealand where it embarked cargo belonging to the 2nd Marine Division and also it underwent exercises as a means of preparing itself for the attack on Tarawa.

On 13 October 1943, the ship participated in "Operation Galvanic" in pursuit of conquering the Gilbert Islands. On 20 November 1943, as the day was beginning, the Thuban reached the position it was ordered to occupy in the sea, just off Betio Island and started the process of unloading boats for the anticipated attack on Tarawa. However, the operation was intercepted by enemy forces with the result that a projectile was sent its way in no time. Nonetheless, the crew managed to take to the sea and stay out of the attack range.

The following days, and especially nights spent around Betio were filled with tension since there were constant raids and bomb explosions disrupting the initial plan. In spite of it, the ship continued to unload supplies and to provide repairs for the boats that were in need of it. The Thuban suffered the loss of 3 men from its crew and saw the sinking of 4 of its landing craft as they attempted to approach the beach. In addition to this, there was a large number of wounded people overwhelming the already highly solicited medical resources. It was on 27 November 1943 that the vessel finally departed Betio and steamed to the Hawaiian Islands.

The Thuban unloaded army units and equipment of the 2nd Marine Division in two locations, Hilo and Honolulu, and then just outside Pearl Harbor, it engaged in training to prepare for the conquest of the Marshall Islands. The ship left the Pearl Harbor area on 21 January 1944, and on 31 January it arrived in Kwajalein. The next day, the ship began the process of unloading cargo with items varying from projectiles, to gunpowder and tanks. In 1944, at the end of February, the Thuban was sailing around the coast of southern California, and for the following months of March and April, the ship engaged in training exercises. On 1 May 1944, the Thuban joined the 5th Amphibious Force and steamed to Pearl Harbor where it further rehearsed for the coming operations.

On 18 May 1944, the ship stocked up on supplies to provide for the 4h Marine Division, and on the 29th it started the preparations for the attack on the Marianas. As Thuban was approaching Saipan on 15 June 1944, there were explosions filling the sky, and the vessel proceeded to unload discreetly. However, the crew was soon under the attack of 7 Japanese bombers, with one bomb dropping as close as 3,000 yards from the starboard bow. The Thuban, among other ships from the fleet retaliated with anti-aircraft fire which quickly put an end to the Japanese attack.

Another Japanese attack occurred on 26 June 1944 further aggravating the tumultuous circumstances. Close to 100 men were injured on the shore and had to be transported to the sickbay where they received medical attention from the one doctor on the ship and numerous crew members tending to those with less serious wounds. At the same time, the Thuban was providing fuel and other supplies to the other ships assigned on the operation. Even as the wounded were being transported on deck, the attack on the Thuban continued with as many as 5 bombs dropping nearby the vessel just after midnight.

On 1 July 1944, the patients were moved to ships that had more advanced medical caring units and after loading ammunition and fuel, the ship hastily returned to support the warships operating in the Marianas. On 14 October 1944, Thuban alongside Transport Division 7 and Attack Group Able managed to keep away a Japanese dive bomber as they were struggling at the same time with difficult weather conditions on the sea. Their strategy was to have the two battleships launch attacks while Thuban unloaded its boats.

In January 1945, the Thuban was steaming around the area of Lingayen Gulf and had to fire at a Japanese fighter plane after several bombs were dropped close to the ship. The vessel further launched a boat patrol to ensure that there was not going to be another unexpected attack from the Japanese. As the boats were moving in their positions, the Thuban made a smoke screen to reduce the visibility of their actions in the face of enemy eyes. On 13 January 1945, the ship was under the attack of a Japanese suicide plane that ended up missing its intended target at the last second and crashing into Zeilin (APA-3), another attack transport.

On 14 April 1945, the ship left the Marianas and on 27 April it arrived in San Francisco. After repairs were completed, the Thuban steamed to offer support to the 3rd Fleet stationed around the Honshu Island as they were waiting for the surrender of the Japanese which happened officially in Tokyo Bay. In the following years, the Thuban was transferred to the Naval Transportation Service and then it operated across the west coast of the United States and in the Pacific Islands, most notably the Marianas and Japan, sailing back and forth until the Korean War started in 1950.

On 11 September 1950, the Thuban was a part of Operation "Chromite" which was a codename for the mission orchestrated around the American attack on Inchon. As the troops proceeded with their tasks they narrowly escaped a typhoon. However, the waters were still rough and the Thuban had to stay behind for a while in order to undergo repairings, but it was quickly restored and it was able to join the rest of the fleet.

At the beginning of 1952, the ship was assigned to provide for the American Fleet stationed in Atlantic and Caribbean waters, but by October 1956, as the war began in the Middle East, the vessel was commanded to come to the rescue of American nationals that were in Egypt at the time. For its service during World War II, the Thuban was awarded 7 battle stars and then for its actions during the Korean War, the ship was honored with 3 more battle stars. In 1967, the Thuban was decommissioned and put in the National Defense Reserve Fleet where it remained until 1979, which is the last the ship has been mentioned in records that can be accessed by the public.

Asbestos Risks on the USS Thuban (AKA-19)

Veterans that were active on duty in the U.S. Navy have had to spend their day-to-day activities in a toxic environment due to their constant exposure to asbestos, a highly toxic fibrous mineral that was the primary material used in ship making and shipyard. The use of asbestos in the Navy was a common and constant occurrence from the beginning of the 20th century until the late 1970s, and so all the vessels constructed or repaired in that time period are very likely to contain the toxic mineral. Most frequently, asbestos was used for insulation purposes in pipes and boilers which was especially damaging for personnel that had to work in poorly ventilated spaces such as those below the deck.

In the not so distant past, asbestos was a popular choice especially for domains in need of such a valuable physical property such as resistance to high temperature. The fact that the mineral was accessible in large quantities at a more than manageable price was a welcomed feature. However, in the present day, the negative aspects of working with asbestos have become known as there is more and more recorded data of people suffering from terrible respiratory illnesses, such as lung cancer, asbestosis and mesothelioma, with a large portion of those affected or being at high risk of developing asbestos-related diseases being people that served in the Navy.

Have You Been Exposed to Asbestos on the USS Thuban (AKA-19)?

You can gain a better understanding of what the risks of working with asbestos are, and we can also provide you with information about how the U.S. Navy made use of the toxic substance. To learn more, call us at 760.621.6147.