The USS Vermilion (AKA-107) was a Tolland-class attack cargo ship that served in the U.S. Navy for a little over 25 years.

The USS Vermilion (AKA-107) participated in many operations with its duties mainly consisting of transporting troops, armament and heavy equipment of any sort. The ship was also meant to assist other warships with gunfire in case of combat.

Technical Features of the USS Vermilion (AKA-107) 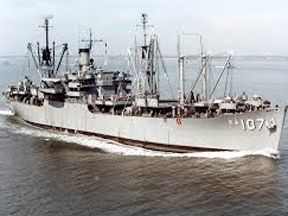 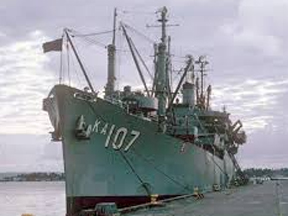 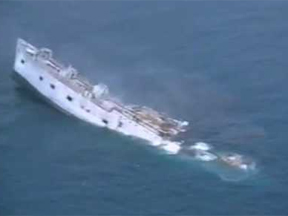 History of the USS Vermilion (AKA-107)

The Vermilion was built by the North Carolina Shipbuilding Company in Wilmington, North Carolina, having as its sponsor Mrs. Rex Freeman. The commissioning of the vessel took place on 23 June 1945 with Captain F. B. Eggers in command. Shortly after the commissioning, the Vermilion was assigned to the Atlantic Fleet and began a period of training and shakedown that lasted for more than a year. In fact, until the 1950s, the ship continued to engage in exercises on the sea while completing standard operations alongside the Atlantic fleet.

The Vermilion was decommissioned on 26 August 1949 and it was docked at Orange, Texas with the Reserve Fleet Group. However, with the start of the Korean War in 1950, the ship was commissioned yet again on 16 October 1950 with Captain A. Jackson in command. The curious fact is that even if the outbreak of the Korean War was the sole reason for the second commissioning of the Vermilion, the ship never once operated in the Far East.

In 1951, the Vermilion participated in Operation Blue Jay which involved the construction of a new airbase that was initially kept secret from the public. The vessel shortly returned to its homeport in Norfolk on 29 August 1951 and continued its assignments with the Atlantic Fleet. As winter came, the Vermilion was sailing in the West Indies, but it was ordered back to Norfolk, and so it resumed its activities with the Atlantic Fleet on 2 February 1953.

The Vermilion was engaged in training exercises taking place at Onslow Beach, North Carolina, but also in the area of the Caribbean. In the second half of the year 1958, the ship was deployed to the Mediterranean Sea, only returning to Norfolk and the Atlantic Fleet in December when the tasks in the Mediterranean were completed. In 1962, the Vermilion was off to the West Indies in order to help solidify the American naval quarantine of Cuba that occurred during the Cuban Missile Crisis. In May 1953, the ship was deployed in the Mediterranean with the 6th Fleet.

In January 1968, the Vermilion left Morehead City, North Carolina and on 22 February 1969, the ship arrived in Buckner Bay, Okinawa where it loaded Marine Air Control Squadron 8. The squadron was disembarked on 30 March back at Morehead City and then the vessel continued its course to Norfolk where it began a period of a six-month overhaul at Norfolk Naval Shipyard. Afterward, the vessel immediately rejoined the Atlantic Fleet. The second and final decommissioning occurred on 13 April 1971, and the ship was taken out of the Navy Registry on 1 January 1977. On 19 February 1988, the vessel became the possession of the South Carolina Department of Natural Resources, and on 24 August it was sunk 46 miles off Georgetown, South Carolina for it to be transformed into an artificial reef.

Asbestos Risks on the USS Vermilion (AKA-107)

Before the 1970s all the ships in the U.S. Navy were made with large quantities of asbestos, which is a toxic fiber that if inhaled or ingested, it never leaves the body causing severe inflammation that leads to terrible asbestos-related diseases, worst of which is mesothelioma, a rare and grave form of cancer that leads to rapid death with few patients surviving more than 2 years after having been diagnosed.

Unknowingly, numerous people who served in the Navy were exposed to this damaging material for prolonged periods of time with the consequence that entire generations were affected by the toxin. Special attention should be paid to boiler and engine rooms as they were almost entirely made of asbestos in an attempt to make them fire-proof.

Although known in the back of the day by several people in charge, the damaging effects caused by working in a medium in which there was a danger of breathing in asbestos was kept secret, and by the time it became public knowledge the poisonous fiber was already irritating the lungs of thousands of oblivious people. If you know somebody suffering from an asbestos-related disease, you should look up how you can legally recover damages.

Have You Been Exposed to Asbestos on the USS Vermilion (AKA-107)?

If you want to know more about the role of asbestos in the Navy or if you simply wish to get in touch with former shipmates, we can help you. For more information, contact 760.621.6147.