USS Vesuvius AE-15 was an ammunition ship. This vessel was active for almost 23 years and it was used during different military operations around the world.

The USS Vesuvius took part in three major military operations: World War II, the Vietnam War, and the Korean War. The USS Vesuvius provided ammunition during some of the most important battles and it managed to receive an outstanding number of awards - 14 battles stars. 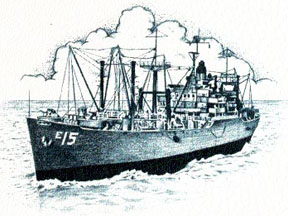 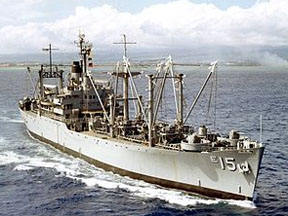 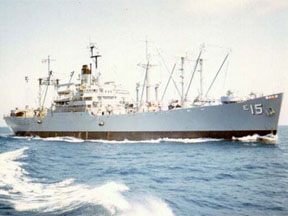 History of the USS Vesuvius (AE-15)

USS Vesuvius was built by the Carolina Shipbuilding Company, Wilmington, N C. This vessel's name was inspired by the famous volcano located in the Bay of Naples that erupted in the year 79 A.D. leading to the destruction of the nearby cities of Pompeii and Herculaneum. The Vesuvius was launched in May 1944 and it was acquired by the US army two months later, on July 4th. It was commissioned in 1945 under Commander Favius J. George. The ship's first endeavor was to provide ammunition for the US troops that took part in the World War II operations. In February 1945, the ship started to load ammunition and she departed to Ulithi Island where she arrived on the 5th of April. After performing her duty here, she rapidly headed to Okinawa where she would join the Service Squadron 6. In July, the ship joined the 3rd Fleet and participated in the raids that targeted Japan. Afterward, she headed for the Philippines, in August, where she remained until the end of the war. In October, the ship headed back home to the US. She arrived in Virginia in December and then went to Leonardo, N.J. where the ammunition had to be discharged. In August 1946, the Vesuvius was in reserve at Orange.

After 5 years, the vessel was called back to duty in order to help the US Army during the Korean War. The ship was recommissioned in November 1951. In January 1952, the ship started exercises at Port Chicago, California where she also loaded ammunition. In March, the ship headed to Sasebo, Japan, where she provided ammunition for the Task Force (TF) 77. In December, Vesuvius was back home for overhaul.

During the following years, Vesuvius was used in the western Pacific to support the 7h Fleet. Some of the locations where she made deployments were Sasebo, Kagoshima, the Subic Bay, Yokosuka. In the years preceding the Vietnam War, the ship made a total number of 11 deployments.

The USS Vesuvius started participating in the Vietnam War in February 1965. Her first destination was the Subic Bay where the ship arrived in February and began operating in the South China Sea. After 182 underway replenishments, the vessel was allowed to return home to California in November. At the beginning of the following year, the ship spent more than a month at the Puget Sound Naval Shipyard in Washington for repairs. In May 1966, the vessel headed to the western Pacific and it engaged in replenishment operations until November. In 1967, the ship was getting ready for an extensive overhaul at the Mare Island Naval Shipyard. After this operation, she headed back to the western Pacific and was deployed in the South China Sea. At the beginning of the next year, Vesuvius was heading home when she was called back to duty near Vietnam due to the Pueblo incident. Afterward, she returned to the US and, after a series of repairs, the ship was again ready for service. In August, she headed back to the seas off Vietnam. In 1969, Vesuvius' mission was to support the 7th Fleet in the Tokin Gulf and the South China Sea. In 1971, the vessel's presence was once again required in the western Pacific. In January, she started replenishment operations for the 7th Fleet and the Royal Australian Navy. After several months, the ship returned home for a refreshment training. In 1972, she was ready for deployment once again. In February, she turned back in the Subic Bay to continue supplying ammunition to the 7th Fleet. The next year, Vesuvius was decommissioned and sent to Mare Island where she would remain in the Inactive Ship Maintenance Facility.

The ships that were built for the military in the period ranging between the two world wars and after the second world war contained significant amounts of asbestos. This material was used for decades by the military because it was very resistant to fire, it had an impressive strength and it was also affordable. The ships that were sent on military operations were literally packed with asbestos. This mineral was present everywhere: in the pipes, the boiler rooms, the decks, the engine room and even in the areas where the crew members slept or ate. Inhaling asbestos fibers was unavoidable aboard of these vessels. No matter what part of the ship they worked in, all sailors were exposed to equal dangers because asbestos particles are very thin and they easily spread once they are released into the air.

The range of health consequences triggered by this toxic mineral is wide. People who worked in an environment that is contaminated with asbestos are often diagnosed with respiratory diseases. Asbestosis, mesothelioma, or lung cancer are some of the conditions that have been linked to exposure to asbestos particles. Once these fibers get into the lungs, they gradually damage the tissue, causing irreparable scarring. Moreover, the illnesses are often diagnosed very late because they have a long latency period. Someone who served in the army 50 or 60 years ago can start feeling the effects of asbestos exposure today.

Veterans are some of the most frequently diagnosed patients. Many of them discover that they suffer from asbestosis or mesothelioma due to the years of military service when they were unknowingly surrounded by asbestos.

If you were part of the crew that worked on USS Vesuvius, you should get tested for asbestos. If you discover that the exposure caused you any physical harm, you are entitled to a compensation.

Our purpose is to help people like you get in touch with their former shipmates. We have an extensive database that can help you reach out to your former colleagues. Moreover, we have the necessary knowledge and legal support to guide if you want to file a claim for asbestos exposure. Call us at 760.621.6147 for more information.