The USS Vicksburg (CL-86) was a Cleveland-class light cruiser. Even though the ship was initially called Cheyenne, it ended up being the third ship of the U.S. Navy to have its name inspired by the city of Vicksburg in Mississippi. Such a vessel was generally tasked with the transportation of armor.

The most notable operations in which the USS Vicksburg was involved occurred during World War II, and as a reward for its participation in these times of conflict, the vessel was awarded two battle stars. 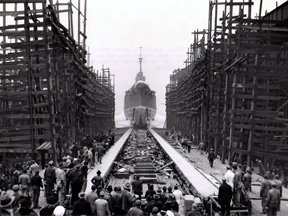 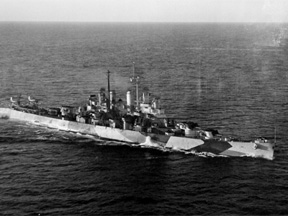 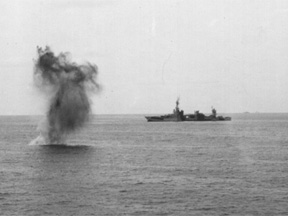 History of the USS Vicksburg (CL-86)

The USS Vicksburg (CL-86) was built by the Newport News Shipbuilding and Dry Dock Company in Newport News, Virginia. Miss Muriel Hamilton sponsored the ship and when it was placed in commission on 12 June 1944, Captain William C. Vose was assigned the commanding officer position. The ship sailed to the Chesapeake Bay in order to perform shakedown exercises. After completing the training period, it entered Boston Navy Yard in September 1944 to undergo a post-shakedown overhaul.

In January 1945, the Vicksburg sailed alongside the USS Rodman and the USS Emmons as a part of Task Group 21.12. After four days of sailing together, the Task Group docked at Balboa, Panama from where they were ordered to continue sailing independently. On 6 January, the ship left for the Hawaiian Islands and by 17 January, it reached Pearl Harbor. The cruiser immediately began training off Oahu, mainly focusing on radar and aircraft tracking exercises. On 5 February 1945, the Vicksburg left Pearl Harbor and steamed to Saipan in the Marianas where it arrived on 13 February. The ship was involved in the preparation of Operation Detachment that focused on the bombing of Iwo Jima as well as supporting the landing of troops pertaining to the 4th and 5th Divisions. On 15 February 1945, the Vicksburg became one of the units of Task Unit 54.9.2, alongside other destroyers. As part of its mission in the Task Unit, the ship provided a lot of firepower, launching shells at enemy targets located in the northern part of Iwo Jima. The visibility was poor due to squalls but the vessel continued the bombing nonetheless. They only ceased fire in the evening when the cruiser and the rest of the fleet retired to the sea for the night.

Until March 1945, the Vicksburg was sailing the waters around Iwo Jima helping out with the landings of the troops by means of gunfire. By 5 March, the ship steamed to Ulithi for a quick overhaul after which it joined Task Group 58.1 that was reporting to the 5th Fleet in anticipation of the invasion of Okinawa by the Allied forces. While doing screening duty, the Vicksburg had its first confrontation with the Japanese in March 1945 while the ship was sailing off Kyushu. A torpedo was launched at the Vicksburg, but the ship managed to resist the attack without any major damages while at the same time the aircraft from the vessel were bombing the shore targets on the Japanese islands.

In a later phase of the bombing campaign, the ship had to sail independently, leaving the units of TG 58.1 to move into another position off Okinawa for a better point of attack. The strategy turned out to be effective since the ship blasted many supplies and ammunition Japanese bunkers. Until June 1945, the Vicksburg was also involved in a minesweeping operation in the waters of the East China Sea. When the sea routes were cleared for other ships, the vessel steamed to the Philippines. In August 1945, the Vicksburg became a part of Task Group 38.2, and all the units had the mission of keeping a watch on all access points to Tokyo Bay as the formalities of the Japanese surrender were being finalized in September that same year. Three days after, the Vicksburg docked at Tokyo Bay. In September 1945, the Vicksburg left Tokyo Bay to join the 3rd Fleet on route to Okinawa where it docked at Buckner Bay to embark 2,200 people to transport back to the United States. In January 1946, the ship entered the Terminal Island Naval Shipyard in San Francisco and when the overhaul was completed, the ship was one of the most modern vessels of its class. In June 1947, the Vicksburg was placed out of commission while at San Francisco, California. The ship was sold in 1964 for scrapping.

A mineral called asbestos was considered for a long time the miracle material needed by the construction industry. The substance was mined all across North America because of valuable physical and chemical properties. Asbestos is lightweight while durable and it is also a poor electrical conductor which makes it an ideal choice for fireproofing.

Thus, it is understandable why the largest part of the 20th century sees the mineral as almost interchangeable with the term insulation. Given their qualities, asbestos fibers were sprinkled in the majority of mixtures destined for insulation jobs.

By the 1940s, all Navy ships had asbestos insulation, which meant that each time there would be need of maintenance and repairs, the toxic fibers would be released in the air for those on the work site to inhale. However, at the time, Navy personnel had no knowledge of the dangers, especially since the latency periods for diseases caused by asbestos can be up to 50 years and so no symptoms showed up to warn them of the danger until it was too late.

Have You Been Exposed to Asbestos on the USS Vicksburg (CL-86)?

We can help you learn more about how servicemen were exposed to asbestos in the Navy. We can also help you get in touch with your former colleagues. Call us at 760.621.6147 for more information.