The USS Waldron (DD-699) was an Allen M. Sumner-class destroyer.

The name of the ship honors John C. Waldron, who was a praised aviator in the United States Navy, having made history during a World War II-related operation by having led an entire squadron of torpedo bombers. Most of the units of the squadron perished in battle, including Waldron.

While active on duty, the USS Waldron was meant to provide escort services to vessels that were sailing in convoy or in larger groups. The Waldron also had the means to protect the fleet in case of attack, as it was equipped with artillery that allowed it to leave such circumstances undefeated. 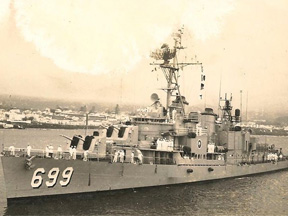 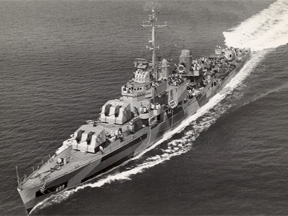 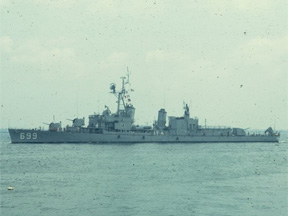 The USS Waldron was built by the Federal Shipbuilding and Drydock Company at Kearny, New Jersey. Miss Nancy Waldron christened the ship and Commander George E. Peckham was assigned commanding officer at its commissioning in June 1944 at the New York Navy Yard.

The Waldron completed shakedown in the area of Bermuda in the summer of 1944. By October, the ship had arrived at the Panama Canal where it joined the Pacific Fleet. Side by side, the units of the fleet arrived at Pearl Harbor in October. The Waldron ended up sailing Hawaiian waters until the month of December when it was deployed to the western Pacific. The ship arrived at Ulithi on the 28th of December and began screening duty for the Fast Carrier Task Force 38. In fact, all the operations conducted by the vessel during World War II were in the service of fast aircraft carriers. Alongside Task Force 38, the ship left for Ulithi at the end of December offering protection to the carriers as their planes were launching strikes against the enemy targets on 3 and 4 January and also on 6 and 7 January. Both missions were in anticipation of the attack on Luzon that occurred at Lingayen Gulf on the 9th. On 13 January, the entire task force refueled after which it continued to launch airstrikes against Hainan Island and Hong Kong. On the 20th of January, the Waldron screened Task Force 38 away from the South China Sea and into the Philippine Sea, with the ship immediately returning to the American base at Ulithi after that journey was completed. On 10 February, the Waldron returned to duty with the newly formed Task Force 58, this time around the focus being the attack of Iwo Jima that was planned for the 19th. Arriving off the island, the ship briefly reported to Task Force 51 by offering gunfire support. On the 27th, the vessel went back to duty with the ever-growing Task Group 58.3.

In March, from the night of 20th leading into the 21st, the Waldron took down a Japanese Yokosuka D4Y, which was a dive bomber that was used by the Japanese mostly for kamikaze missions. The next day, the ship returned to screening operations with its task force, launching airstrikes against both Kyushu and Okinawa, getting ready for invading Okinawa. For the following three months, the vessel screened the group of carriers and assisted them during the campaign in Okinawa. The ship was involved in anti-aircraft missions mostly, but it also took part in shore bombings against Minami Daito Shima. For the rest of its operations during World War II, the ship continued to support the bombing of Japanese islands. Even after the hostilities stopped, on August 15th, the task group kept close to Japan to oversee the occupation of the island. After completing the immediate postwar duty, the Waldron departed for the United States, arriving at Norfolk, Virginia in February 1946. For the following three months, the vessel was only involved in operations off the east coast of the United States. In May, the ship entered the Boston Naval Shipyard for reparations that lasted for nearly the entire year.

The outbreak of the Korean War in 1950, brought about by the armed North Korean communist forces invading the Republic of Korea in the south, took the Waldron back to Far East waters. In 1951, the Waldron left Norfolk for a ten-month deployment to North Europe, after which it sailed to the Mediterranean where it joined the 6th Fleet. In November 1953, the Waldron departed Norfolk for another cruise in the Far East, arriving at Yokosuka in Japan in December. The ship operated along units of the United Nations security forces, doing patrol duty as a way to check the peace status in Korea after the hostilities in the area had ended the previous summer. In April 1956, the vessel was deployed to the Mediterranean for the second time, having to report to the 6th Fleet. In June 1962, the Waldron entered the Norfolk Naval Shipyard for a rehabilitation and modernization overhaul where the primary focus was the upgrade of its anti-submarine abilities.

In 1967, the ship was assigned to tour in Far East waters and by August 24th it arrived off the coast of Vietnam. During its stay in the region, the Waldron offered support in the form of gunfire to the III Marine Amphibious Force, as the units conducted operations ashore in the conflict zone. By October 1967, the Waldron was involved in yet another mission off Vietnam, assisting armed forces of the 1st Air Cavalry Division as well as of the South Vietnamese 40th Division. Simultaneously, the ship was also engaged in missions with the carriers of Task Group 77.8. The Waldron had to serve off Vietnam until December when it was finally released of duty and headed to the United States. In January 1968, the ship was stationed at San Francisco and for the following two years it was mostly engaged in operations off the Atlantic coast with two exceptions when it was deployed to Mediterranean waters.

In October 1973, the Waldron was placed out of commission at Mayport in Florida and sold to the Colombian Navy, where it operated under the designation ARC Santander (DD-03) until it was decommissioned again in 1986.

Asbestos is a mineral that just a few decades ago used to be the fuel driving the 20th century United States economy, launching new businesses and boosting already existing ones to reaching the giant corporation status. The miracle mineral, as it was so often referred to existed in large resources since it was discovered in multiple mines on the North American territory.

Asbestos turned out to be resistant to high temperatures and it exhibited poor conductivity for electricity. Manufacturers soon figured out that if they poured asbestos fibers into other mixtures, then the compound would gain more overall strength and it would be safe from fire. As World War II was quickly exhausting resources, the U.S. military found a savior in the uses of asbestos.

The Navy, for example, had all its ships insulated with the mineral, not to mention that entire sections of the vessel were made out of materials that contained the fibers. There is no immediate threat from an asbestos product as long as the toxic fibers are kept intact in the compound, however, should they be released as dust, as a result of deterioration, the particles are easy to inhale. Once inside the body, they start irritating the internal organs, this way a possibility of developing cancerous diseases always being present.

We have the testimonial of a former shipmate, who served on the USS Waldron (DD-699) from 1964 to 1968. He faced significant asbestos exposure during his military service because he did not wear proper protective clothing and face mask.

Have You Been Exposed to Asbestos on the USS Waldron (DD-699)?

We can help you with information about all the ways in which asbestos was related to the U.S. Navy. If you want to file a claim, we can put you in contact with experienced asbestos lawyers. To learn more, call us 760-621-6147.