The USS Washburn was a Tolland-class attack cargo ship. The inspiration behind its name is the county of Washburn in Wisconsin. The ships from this class were built for the purpose of carrying military ammunition but also armed forces. The USS Washburn was in service for almost 25 years and as an honor to its longevity, the U.S. Navy Museum in Washington has on display one large scale model of it. The highlights of its long service were its actions during the Korean War for which it received 5 battle stars and also its operations in the Vietnam War for which it was awarded 6 battle stars.

Technical Features of the USS Washburn (AKA-108) 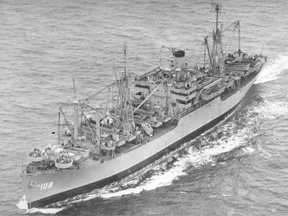 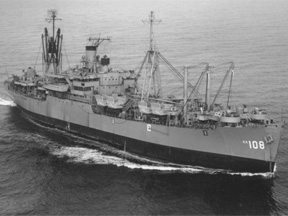 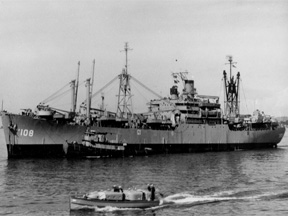 History of the USS Washburn (AKA-108)

The USS Washburn was partially built by the North Carolina Shipbuilding Company and then completed by the Todd-Hoboken Shipyard in Hoboken, New Jersey. The ship was placed in commission on 17 May 1945 with Commander W. C. Jack commanding and Maj. K. A. Towle as a sponsor. After completing a two-week shakedown in the area of the Virginia Capes, the ship was sailing to the Mediterranean. The Washburn briefly docked at Marseille where it embarked supplies and armed forces to transport to the Philippines. By August 1945, the ship arrived at Manila. After having completed its mission at Manila, the ship was to report on operations in the Far East. The vessel sailed to Lingayen in order to take on board units of the 33rd Infantry Division and carry them to the Japanese islands for occupation duty. For the rest of 1945, the Washburn operated in the western Pacific transporting both passengers and armament between different American bases.

In 1946, between the months of January and March, the ship was steaming Eastern Pacific waters while taking part in fleet training exercises, a training deployment that lasted well into November 1948. In 1949, the Washburn went back to the West Coast to take part in Operation Miki, which was a large-scale exercise that occurred out of Puget Sound in Washington, as the location permitted a simulation of the invasion of the Hawaiian Islands. In 1950 the Washburn took part in Operation Portrex, an assault exercise for amphibious forces that was staged out of Puerto Rico. At the end of the training, the ship re-joined the Pacific Fleet.

In the summer of that same year, the aggravation of the hostility in Korea required more American sea forces to watch over the area, with Washburn being among the units that rushed to the scene. For approximately 18 months, the ship was sailing from Japan to Korea and vice versa in an effort to provide reinforcement with supplies and artillery. The ship was also involved in the landings of troops at Inchon and Wonsan that happened in September after which the vessel went back to its routine transportation-related operations. The Washburn also visited Far East ports such as Nagoya and Sasebo but spent more time at Inchon in Korea due to its participation in Operation Big Switch, which was concerned with the prisoners of war and their repatriation as the Korean War was over.

In 1954, the Washburn left on a deployment to the Orient that lasted eight months. Besides the usual port calls at locations such as Inchon, Nagoya, Okinawa, Pusan and Sasebo, the ship also made visits to new places such as Yokosuka in Japan, the Subic Bay in the Philippines Islands, Taiwan and also the Tachen Islands. For the following decade, the Washburn operated mostly in the Western Pacific and along the West Coast. However, if there was a need for its services elsewhere the ship would rush to the trouble zone. For instance, in January 1962, the vessel sailed the waters of the Quemoy and Matsu islands as the Communist Chinese forces had bombed the two locations in an occupation attempt. The ship was also involved in the quarantine of Cuba at the orders of President Kennedy.

In 1964, the Washburn began deployments to Vietnam which it periodically toured until the rest of its operations in the Western Pacific. By December 1964, the ship was already involved in missions targeting communist insurgents. In 1966, the Washburn was yet again deployed to the Far East to Vietnamese ports for transportation duty. In July 1967, the ship docked at Todd Shipyard at Seattle in Washington where it underwent an overhaul that lasted three months. The Washburn finished its last deployment in the conflict zone by October 1968 when it returned to the United States. When at San Diego, the ship proceeded to engage in local operations. In May 1970, the ship was placed out of commission. The Washburn was eventually taken off the Navy Registry and sold for scrapping.

Asbestos Risks on the USS Washburn (AKA-108)

Although the risk for U.S. veterans to develop asbestos-related diseases has been an acknowledged fact for a while now, it has also been recorded that the largest part of medical records documenting the illnesses and the patients are related to servicemen that did duty in the Navy. Out of all branches, it was the Navy that used massive amounts of asbestos since the building of ships alone required significant quantities of materials, most of them having been embedded with the toxic mineral.

By the time of World War II, the majority of the newly constructed ships had asbestos insulation covering most of the systems that kept the vessel functioning. From the engine rooms to the boilers, to valves and gaskets, seals and deck flooring, there was asbestos everywhere. The material was fire resistant, it was cheap and easy to procure.

However, as time progressed and the intense usage of asbestos brought more and more attention to the so-called miracle mineral, it was discovered that asbestos fibers are actually highly damaging to the health of humans. Should they make their way inside the body, they can become stuck on the thin tissue around the lungs, heart or abdomen and cause severe forms of cancer, the most unforgiving of which is mesothelioma.

Have You Been Exposed to Asbestos on the USS Washburn (AKA-108)?

If you served on the USS Washburn (AKA-108), we can be your guide in your journey of figuring out your own exposure to asbestos. We can also assist you in reaching out to your former shipmates. For more information, call us at 760.621.6147.