This vessel was in service for more than 25 years during which it took part in several battles during and after World War II. 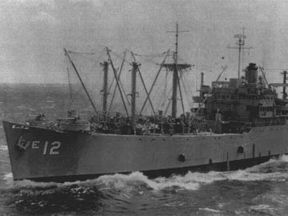 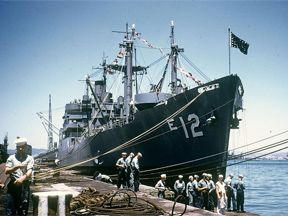 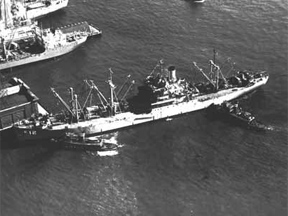 History of the USS Wrangell (AE-12)

This vessel was incomplete when it was delivered to the Navy on 28 May 1944 and it was converted by the Norfolk Shipbuilding and Drydock Co into an ammunition ship. Afterward, it was commissioned on 10 October 1944 at Norfolk Navy Yard under the command of Mr. Haskell C. Todd. The ship was loaded with ammunition at the Naval Weapons Station Earle in New Jersey, on 13 November. Then, USS Wrangell started its mission by sailing to the Panama Channel and Hawaii. On 21 December, the vessel arrived at Pearl Harbour and then headed to the Marshall Islands and finally arrived at Eniwetok. Afterward, it went to the Carolines and stopped for 5 months to operate in Ulithi. During these months, it operated against the Japanese home islands, Iwo Jima and Okinawa. The Wrangell's mission was to supply the combatant vessels with ammunition.

In spring, the ship headed to the Marianas and again to Ulithi where it helped the other combatant ships attack the enemy shore in the Okinawa campaign. In June, the Wrangell went to the Philippines for repairs and turn to work in July, supplying ammunition to 35 ships. The vessel's mission was interrupted on 10 August when Japan announced its capitulation, putting an end to World War II. After the war ended, the vessel turned back home, dropping anchor at Orange, Texas. On 17 May, it was placed in reserve and decommissioned on 19 November 1946. Wrangell was called back to duty on 14 November 1951 when the war in Korea started. The ship went again to the Naval Weapons Station Earle to receive ammunition. After training and exercises, the ship participated in Operation Noramex which took place in the North Atlantic.

In December 1970, USS Wrangell (AE-12) was decommissioned at Norfolk. After being placed in reserve at Charleston, the vessel was taken to the Norfolk Inactive Ship Facility, following its placement in the National Defense Reserve Fleet. On 1 October 1971, the ship was struck from the US Navy List.

The ships used in the Navy between the 30's and the 70's are nowadays remembered for the bravery they proved during the past century's military operations. Nonetheless, these vessels posed significant risks to human health and the dangers were not limited to the war's perils. One of the hidden hazards people back in those days were unaware of was asbestos exposure. This natural mineral was omnipresent on the military ship. It was used as a construction material and it could be present anywhere; in pipes, valves, engines, turbines, boilers.

Asbestos was very efficient as an insulator and this is how it became a predilect material in many industries. Yet, few people knew that asbestos was also a carcinogen that caused severe conditions like lung cancer or mesothelioma.

The people who served on these ships had high chances of developing one of these conditions due to prolonged exposure. Asbestos was present in massive quantities in all the vessel's sections so inhaling its particles was inevitable. Moreover, it became increasingly dangerous when repairs or maintenance works were performed in places where the asbestos concentration was high because this released even more fibers.

Once these particles are inhaled, they cause permanent damage to the lungs and not only. Consequently, thousands of veterans have been diagnosed with asbestos-related diseases after serving in the Navy for years. Today, these people can find relief by filing a claim for asbestos exposure which will most probably enable them with a compensation.

Have You Been Exposed to Asbestos on the USS Wrangell (AE-12)?

If you have been involved in the construction of the USS Wrangell (AE-12) or you are a veteran who served on this ship, you were probably exposed to asbestos. We are here to help you find your former work colleagues and give you more insight on the use of asbestos in the US Navy. If you have any questions, feel free to contact us at 760.621.6147!