The USS America (CV-66) was a Kitty Hawk-class aircraft carrier. Although there have been a number of aircraft carriers that were called USS America, this particular type that bears the designation CV-66 was referred to as a supercarrier, denoting that it was one of the largest vessels ever built. The most acclaimed operations in which the USS America participated were Desert Shield and Desert Storm, while also making Pacific deployments during the Vietnam War and reporting for duty in that conflict zone. 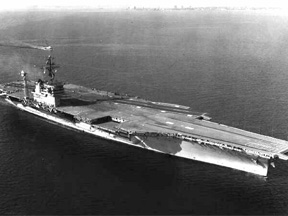 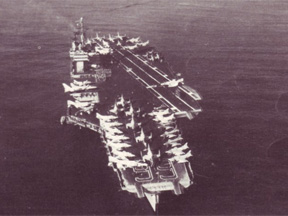 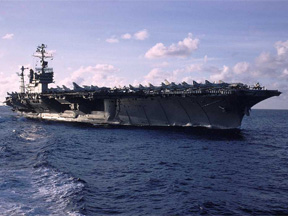 History of the USS America (CV-66)

The USS America was built by Newport News Shipbuilding and Dry Dock Company with Mrs. Catherine McDonald sponsoring the vessel. The commissioning took place at Norfolk Naval Shipyard in January 1965 with Captain Lawrence Heyworth Jr. commanding. Late in 1965, the ship departed for its first tour in the Mediterranean. At the beginning of next year, between February 28th and March 10th, the ship took part in an exercise with the French Navy that was referred to as Fairgame IV, practicing a simulation of a NATO ally being invaded and the response against such actions. After Hurricane Inez passed through its area of operation during the months of September and October, the crew supported the recovery efforts at the base from Guantanamo.

In November and December 1966, the USS America participated in LANTFLEX 66, improving its performance in anti-aircraft and anti-submarine operations. At the same time, the ship practiced missile shoots. By March 1967, the USS America was part of Task Group 60.1, alongside which it took part in a joint exercise with the United Kingdom called Poker Hand IV. During the exercise, the two tested each other's anti-aircraft competencies. In April, the ship together with the units of Task Group 60.1 took part in Dawn Clear, a two-day exercise coordinated by NATO. By May 1967, news of tensions rising in the Middle East were reaching the fleet, and as a result, all units gathered and formed Task Group 60.2 as a way to stay alert and be prepared to engage in any contingency plans.

In June 1967, the news broke that the Israelis were at war with the Arabs. The USS America's team of doctors on board was suddenly faced with an influx of wounded sailors as the USS Liberty was accidentally torpedoed by Israeli forces. American forces initially believed that the attack was intentional and they were ready to retaliate but the Israelis clarified the circumstances just in time for the aircraft to be ordered to stand down. Even though the American fleet was sailing the area and was ready for intervention, during the war between the Arabs and the Israelis, the 6th Fleet remained neutral.

In October, the ship docked at Norfolk Naval Shipyard to undergo an overhaul that only ended in January 1968. After completing repairs, the USS America departed for Guantanamo Bay for refresher exercises. In April 1968, the USS America sailed to the Yankee Station located off Vietnam. During its stay at this particular base, the USS America bombed waterways, roads, bridges and storage areas in an effort to impede the flow of resources received by the enemy and disrupt their logistics operations. For its actions, the USS America was later awarded the Navy Unit Commendation. In January 1969, the USS America entered the Norfolk Shipyard for a nine-month overhaul. In February 1970, the ship took part in Operation Springboard 70, which was a set of training exercises that would occur each year in the Caribbean. Among the main activities, there were air and submarine operations.

In April 1970, the USS America departed Norfolk and by May it started operations located in the Gulf of Tonkin. In September, the ship was headed to Korea and the Sea of Japan. While sailing the Sea of Japan, the USS America took part in three exercises, Blue Sky, a joint operation with the Republic of China Air Force, Commando Tiger, alongside the Republic of Korea Air Force and, lastly, Autumn Flower, which involved self-defense training with the Japanese Air Self Defense Force.

In June 1972, the USS America joined the 7th Fleet. By July, the ship was involved in combat and pretty early on suffered the rupture of the main pump. The vessel had to dock at Subic Bay in order for reparations to be properly executed, which meant that the USS America missed out on about two weeks of missions. In August, the ship resumed active service against targeted communist locations in North Vietnam.

In October 1972, the USS America was reporting to the Yankee Station. Not even a month later, a fire erupted on board, but it was quickly put out by the crew. For its actions in that situation as well as for its participation thus far in the operations in Vietnam, the ship was awarded five battle stars.

In 1974, the USS America took part in Dawn Patrol, a NATO exercise that included the Navies from Italy, West Germany, the Netherlands, and Portugal. The ship also was engaged in another training session coordinated by NATO located in the North Sea called Northern Merger.

In May 1976, the USS America participated in Operation Fluid Drive in the eastern Mediterranean. The operation focused on the evacuation of civilians from Lebanon as the conflict was getting more and more dangerous for the non-combatants. The ship ended up surveilling the area for three months. When the U.S. ambassador in Lebanon was assassinated on June 16th, the efforts of evacuating Americans from the area increased drastically. In March 1979, the USS America operated in the western Mediterranean visiting ports such as Catania, Naples, and Taranto while also participating in multilateral training exercises. In November 1979, the ship entered the Norfolk Naval Shipyard where it remained for most of 1980 undergoing major modifications, the most notable of which was the installation of a Sea Sparrow missile system and of a Phalanx machine gun.

In May 1984, the USS America left for the Mediterranean and made a port visit at Monaco before taking part in Display Determination, an exercise put together by NATO. For a brief span of time, the ship made a port call at Naples after which it returned to participate in phase II of Display Determination. Tensions increasing in the Mediterranean at the beginning of 1986 would have the USS America sail the area as part of the 6th Fleet. By January 7th, President Ronald Reagan had given the order that all American citizens be evacuated from Libya. Soon after, operations began off the coast of Libya. The actions engaged in by aircraft and ships alike were collectively referred to as Attain Document.

In April 1986, Colonel Gaddafi made a threat of violence against all American civilians and soldiers across the world. Soon after the statement, bombs exploded on a flight from Athens to Rome and also in La Belle Discoteque, an entertainment venue in West Berlin that was known to be commonly frequented by American soldiers. Gaddafi claimed responsibility for both and further threatened to take hostage all foreigners in Libya and use them as a shield to his military bunkers. As a response to that threat, President Reagan ordered attacks on targets suspected of terrorism. Thus began Operation El Dorado Canyon, the codename for the United States bombing Libya.

In December 1990, the ship steamed to the Red Sea in order to participate in Operation Desert Shield. The intelligence processing capabilities of the ship were not matched by any other vessel in the fleet. By March 1991, the USS America had dropped over 2,000 tons of artillery on the Iraq and Kuwait combat zones and left with its aircraft intact. In August 1995, the ship departed on its last deployment and during the tour it took part in Operation Deny Flight and in Operation Deliberate Force, working alongside units of the U.N. and NATO. The USS America was also involved in Operation Southern Watch in Iraq.

The USS America was placed out of commission in August 1996 with the initial plan of having it sold for scrapping. However, the ship ended up being used as a live-fire test model and, thus, it was sunk in May 2005 under close monitoring with the purpose of improving future aircraft carriers design.

In the first half of the 20th century, a mineral called asbestos dominated the American markets particularly when it came to the field of construction. The material was fire resistant, cheap and mined all across North America. Such characteristics made the mineral be of special interest to the U.S. Navy, as they were in need of cost-effective construction materials that could withstand life at sea.

Thus, most of the equipment of the vessel was made of mixtures containing large amounts of toxic asbestos fibers, from boilers to gaskets, valves, pipes, and, essentially, all the elements that formed the steam propulsion.

As they were vital for the well functioning of the ship, these components would have to be regularly inspected and repaired, which would lead to inevitably disturbing the asbestos causing the fibers to become airborne. As a consequence, workers would be inhaling asbestos dust, unaware of the fact that they were being exposed to a highly toxic mineral that could potentially lead to the development of diseases that would only show distinctive symptoms decades later.

We have the testimonial of a former shipmate, who served on the USS America (CVA/CV-66): "I was on that ship for two years from 94 to 96 and we're in the shipyards for a while. There were a lot of open areas where you can see the insulation and stuff. Like there were just holes everywhere. We used to sleep beside the air ducts ?cause that's where we worked."

Have You Been Exposed to Asbestos on the USS America (CV-66)?

If you would like to get in touch with former shipmates, we have built a comprehensive database that could be of help in trying to find fellow veterans. Call us at 760.621.6147 to learn more.