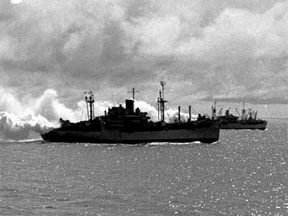 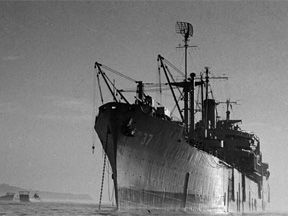 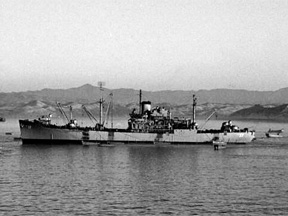 The USS Cavalier (AP-82) assigned to the US Navy as transport, was laid down on 10 December 1942 at Western Pipe and Steel Co., San Francisco, California under Maritime Commission Contract (MC hull 276). The ship was reclassified as Attack Transport (APA-37) on February 1, 1943, launched on the 15th of March 1943 and sponsored by Mrs. M.W. Jackson.

On July 19, 1943, the USS Cavalier was placed in reduced commission because of the transit to conversion yard at Hoboken, N.J. The ship was decommissioned on August 4, 1943, at Hoboken and was modified to an Attack Transport at Bethlehem Steel Co.

On January 16, 1944, the USS Cavalier was recommissioned under the command of Capt. Raymond T. McElliott and had APA-37 as the hull number. The ship served the US Navy for 24 years and carried around 575 people onboard. The major missions of the USS Cavalier were in San Diego, San Francisco, Leyte, Pearl Harbor, Okinawa, Tsingtao, Eniwetok, and Manus. The USS Cavalier was assigned to the Asiatic-Pacific Theater during World War II and the missions included:

The USS Cavalier participated in the North Korean aggression between July and October of 1950, Inchon Landing from 13th to 17 September 1950, UN Summer-Fall Offensive 5th August 1951, and Second Korean Winter campaigns (1951-1952) during the Korean War. The ship also underwent six campaigns between September 1964 and May 1968 during the Vietnam War.

The USS Cavalier was later decommissioned and taken out from the Navy list on October 1, 1968. The ship was sold to Levin Metals Corp. for $417,107 on September 15, 1969, and discarded at the Naval Station San Diego.

The USS Cavalier was one of the amphibious warships that were referred to as "gator freighters". These kinds of vessels formed an integral part of the US Naval fleet and were constructed using various asbestos materials. This posed a high health risk for the crew members as well as the passengers. Asbestos was extensively used throughout the pipe units and sailors who stayed in poorly ventilated closed quarters were exposed to airborne asbestos fibers that got released from the pipes and other materials containing asbestos onboard. Therefore, the people who have served on the USS Cavalier and those who were involved in the removal of asbestos materials from the engineering spaces of the warship are at risk of developing mesothelioma, lung cancer, and other asbestos-related diseases.

Have You Been Exposed to Asbestos on the USS Cavalier (APA-37)?

We are here to help you learn about how veterans have been exposed to asbestos while serving on the USS Cavalier. We can also assist in getting you in contact with your former colleagues. For more information, call us at 760-621-6147.