The USS Duluth (CL-87) was a Cleveland-class light cruiser. The ship conducted its most memorable operations during World War II, having been awarded a Victory Medal at the end of its deployment in the conflict zone, but also a Navy Combat Action Ribbon and an American Campaign Medal.

The USS Duluth, by design, was capable of carrying armor in the same way that an armored cruiser would, while having the benefit of being much lighter and, as a consequence, faster than the other similar type of vessel. 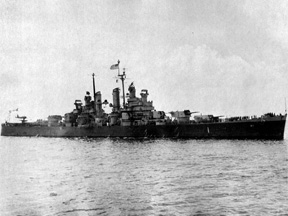 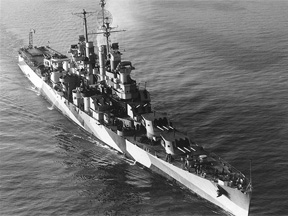 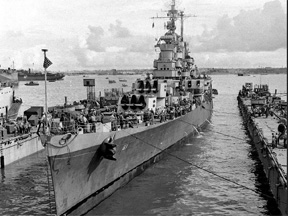 The USS Duluth was built by the Newport News Shipbuilding and Dry Dock Company in Newport News in Virginia. The sponsor of the vessel was Mrs. E. H. Hatch and upon its commissioning in September 1944, the ship was commanded by Captain Donald Roderick Osborn, Jr. Between December 1944 and March 1945, the Duluth was part of a training program in the area of Newport, Rhode Island. After completing a basic overhaul at Norfolk, the ship steamed for the Pacific on 7 April and docked at Pearl Harbor on the 29th.

On 8 May, the Duluth was given orders to report to the 5th Fleet and by the 25th, the vessel had joined the units of the fleet. On 5 June, the bow of the Duluth was damaged severely by a typhoon and had to undergo repairs at Guam. After having received proper renovation, the ship joined Task Force 38 in July for screening duty during the latest airstrike campaign against the Japanese shores. The Duluth remained alongside Task Force 38 until September conducting operations involving air patrol for the occupation forces that were screening Japan from the sky. From January to September 1946, the ship was deployed to the Far East, making port calls from May to July in Australia but also in Guam and Manila.

From September 1947 to May 1948, the Duluth was on another deployment to the Far East, doing patrol duty off the coast of China. In the summer of that same year, the vessel was in charge of the transportation of the Naval Reserve Officers Training Corps, otherwise known as the NROTC, as part of preparing individuals to become officers in the U.S. Navy and in the U.S. Marine Corps. In the month of February in 1949, the ship was ordered to Kodiak, Alaska to conduct operations there. In June 1949, the Duluth was placed out of commission and in November 1960, it was sold for scrapping.

Over the years, the U.S. armed forces saw the services of millions of people, reporting for duty in the Army, in the Air Force, in the Coast Guard, in the Marines and in the Navy. However, those that were in active service until the 1970s are high at risk of being diagnosed with various forms of cancers caused by exposure to asbestos, a toxic mineral that was heavily used by most manufacturers and corporations in the United States for most of the 20th century.

The substance was widely accessible both physically, as there were deposits of it across the entire nation, and financially, as a result of its abundance. Paired with heat resistance and inertia in regard to electricity, asbestos soon became an extremely valuable resource both for industries and for the armed forces.

The material especially clicked with the Navy, given the fact that its properties would allow for much and cheap insulation, a desirable feature to have when training for combat at sea or when engaged in actual operations in war zones. As it was discovered later, the mineral is highly toxic for humans that have inhaled it in its fiber form periodically since the particles never leave the organism once they found their way inside it, creating an irritation that over a few decades can develop into a cancerous illness.

Have You Been Exposed to Asbestos on the USS Duluth (CL-87)?

If you are interested in finding out more about the ways in which asbestos exposure affects those that have served in the Navy, we can help you improve your knowledge in the matter. Contact us at 760.621.6147 to learn more.