USS Mauna Loa was a Lassen class ammunition ship that served the US Navy between1943 and 1971. She took part in different battles and military operations worldwide.

Some of the locations where USS Mauna Loa operated were the Mediterranean, the New Hebrides, Espiritu Santo, the Marshall Islands, Vietnam, Guantanamo Bay. 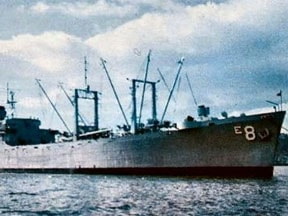 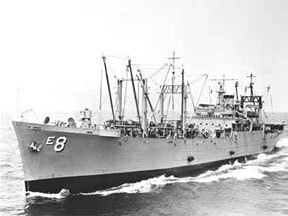 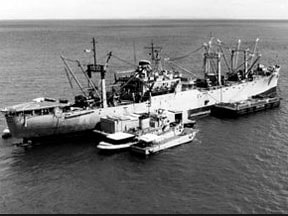 History of the USS Mauna Loa

USS Mauna Loa was laid down in 1942 by the Tampa Shipbuilding Co. and named after the homonymous shield volcano located in the Hawaii islands. It was launched on the 14th of April 1943 and its sponsor was Mrs. Robert Friend. In October 1943, the ship was commissioned under the command of George D. Martin.

Between 1944 and 1947, USS Mauna Loa took part in the military operations of World War II. The vessel's first mission was to reach Pearl Harbor in January 1944 with 5,600 tons of ammunition. Afterward, in February, the ship headed to the Marshall Islands and reached Majuro where it started rearming the US fleet. During the same month, USS Mauna Loa went through a critical event; while it was arming the USS Pennsylvania, the gunpowder carried aboard of this ship, in cans, exploded. Mauna Loa did not suffer severe damages, but some of the crewmen on USS Pennsylvania were injured.

The next mission of USS Mauna Loa took place in April when she headed to the New Hebrides, destination Espiritu Santo where it would remain for a month to assist in the Marianas operations. In September, the vessel was deployed in Palaus where it rearmed the 3rd Fleet. Then, in November, she headed to Ulithi where it operated until the beginning of the Okinawa campaign. In March, it embarked on a 5 months mission during which it provided ammunition to 99 ships. In August, by the time Japan capitulated, USS Mauna Loa was located in the Philippines. In 1946, the vessel was taken to the Pacific Reserve Fleet and it was decommissioned the next year in 1947.

In 1955, the ship was recommissioned and departed to the east coast for training and then it returned to service out of Earle, N.J. The next year, the vessel headed to Europe accompanied by Mine Division 81. It operated in the Mediterranean for several months and then it returned home and it served in the coastal area located between Gravesend Bay and Norfolk.

In 1927, USS Mauna Loa went through another critical moment when a fire that occurred aboard due to an explosion while the ship was close to New York Harbor. Fortunately, the crewmen managed to contain the fire. Following this incident, the vessel required repairs for approximately two weeks.

In 1958, the ship went for the third time in the Mediterranean and after its return to the US, it was inactivated and decommissioned at the Atlantic Reserve Fleet in Texas. In 1961, Mauna Loa was called back to duty to support the Navy of Guantanamo Bay, along the East Coast where it served for the following 7 years. In 1967, USS Mauna Loa participated in the Vietnam operations where it brought its contribution in fighting against communist troops. Between 1968 and 1970, the vessel was deployed for the last time in the Mediterranean where it provided ammunition to aircraft carriers, cruisers and destroyers.

Up until the 70's, the Navy was linked to some of the highest exposure risks to a dangerous mineral called asbestos. This substance was present everywhere aboard of the ships that were used in military operations. This is one of the reasons why so many veterans who had been working in the Navy were diagnosed with asbestos-related diseases. The Navy was probably the military branch that had the highest demand for asbestos which was used as an insulator virtually everywhere aboard of its vessels. This extensive usage is nowadays the well-known cause of the high number of mesothelioma and asbestosis diagnoses which changed the lives of so many veterans.

Fortunately, these people receive aid for the damage that was brought to them in the form of compensation. To access this award, they have to file a claim with the VA, ideally, after consulting a lawyer who has experience in this area.

Have You Been Exposed to Asbestos on the USS Manua Loa?

If you believe you might have been exposed to asbestos during the years you served in the Navy, our advice is to get checked. We can provide you information about the medical and legal process that an asbestos exposure victim should take in order to access their rightful benefits. Call us at any time to learn more: 760.621.6147!