The USS Rainier AE-5 was the second vessel in the Navy to be named after Mount Rainier.

This ship was laid down on the 14th of May 1941 by the Tampa Shipbuilding Co and it was initially named the Rainbow.

The USS Rainier took part in several missions and it is was awarded twelve battle stars for its performance during the Vietnam and Korean wars.

Technical Features of the USS Rainier 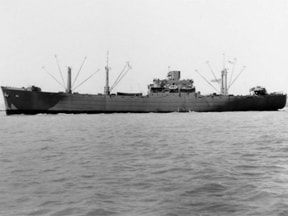 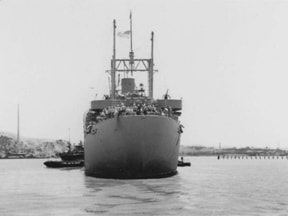 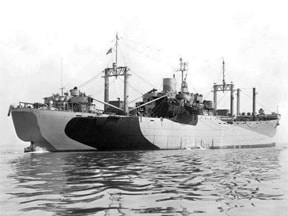 History of the USS Rainier

The USS Rainier was launched in March 1941 and its sponsor was Mrs. Robert E. Anderson. In the commissioning day, the vessel was named Rainier - just like the highest mountain in the Cascade Range, in the Pacific Northwest. The vessel was converted into an ammunition ship in the same year in December at Norfolk, Virginia. This ship was deployed during World War II. Its first mission was to travel from Port Chicago, California to Pearl Harbor to provide ammunition to combatant ships. After this mission, the Rainier headed to the Fijis where it had to provide ammunition to the ships that participated in the Solomon Islands campaign. Then, followed the mission in New Caledonia and the return back home in the US. In 1943 the USS Rainier AE-5 made ammunition runs between Hawaii and the West Coast, in the New Hebrides, and Efate. In 1944, the vessel was deployed in the Marshall Islands, in Majuro, Eniwetok. Afterward, it participated in the Philippine campaign. In 1946, the vessel was already preparing for deactivation and it was decommissioned on 30 August.

In 1951, when the Korean war had already started, the USS Rainier was recommissioned, and it participated in missions in Sasebo, off the coast of the Korean peninsula. In 1953, the vessel headed back home. In 1955 it was involved in ammunition runs between Japan and Korea, continuing with deployments in the Philippine area in the 1960's.

The Rainier also took part in the Vietnam war, providing ammunition to the 7th Fleet. In 1964 this vessel participated in the Gulf of Tonkin incident supplying ammunition to the ships that fought against the North Vietnamese bases. Afterwards, it continued operating in the Subic Bay and in October, the ship headed to Japan and it turned back home in December. In 1966 the Rainier continued its operations by supplying the 7th Fleet and in August it underwent a training period for new equipment. Then, it resumed its usual deployments for the 7th Fleet in the Subic Bay. In 1967, the vessel took part in fleet exercises in California. In 1968, the Rainier continued the replenishment activity in the Subic Bay and it received a Battle Efficiency E award. In 1970, the ship conducted its last deployments off Vietnam and turned home for deactivation.

On 7th August 1970, the USS Rainier (AE-5) was decommissioned and struck from the Navy's list.

Asbestos Risks on the USS Rainier

Asbestos was present everywhere aboard the Navy ships that were deployed in the period ranging from the 1930's to the 1970's. This mineral was an extremely powerful insulator, it had an amazing strength and it was affordable. Therefore, it was used in various areas of the ship like the engine room or the boiler room, either as an insulator or as part of building materials. Asbestos was used in more than 300 products that were regularly present aboard of the Navy ships. Basically, the entire vessel was contaminated with asbestos fibers and this posed tremendous health risks to the crew members that operated on there. Once asbestos fibers are inhaled, they cause irreversible damages to the lungs and not only. Asbestos is a recognized carcinogen that can lead to life-threatening conditions such as mesothelioma, lung cancer, asbestosis, esophageal or laryngeal cancer. The dangers of contamination for those who worked on military vessels were inevitable. The ship's deployments often triggered the necessity to perform maintenance works and repairs. During these operations, the hazardous fibers were easily released and inhaled. Moreover, they rapidly spread throughout the ships, so everybody was equally exposed.

The dangers of asbestos started to be exposed in the 70's when this substance's use also became restricted. Unfortunately, the damage was irreversible for those who have served in the military in the previous decades. Nowadays, veterans and their families can file a claim for the injuries caused by asbestos exposure and receive a compensation.

Have You Been Exposed to Asbestos on the USS Rainier?

Have you worked aboard of the USS Rainier (AE-5)? If you believe you suffered from asbestos exposure during your military service period, we can help you. Our website can put you in contact with your former shipmates who are probably in the same situation. Moreover, we are here to provide you more information about asbestos exposure and its use in the US Navy. Call us at any time at 760.621.6147!