People who served in the Navy, Coast Guard and US Army Transport Service have spent numerous hours aboard ships which contained the toxic mineral asbestos. Because ships were built or repaired from the early 20th century through the 1970s with materials containing asbestos, the crews were exposed to it every single time they were on board. Asbestos was used in a variety of applications on board US Navy vessels, most often being used in insulation materials around pipes, pumps, valves and boilers.

Each month we will talk about a different US Navy ship on which asbestos exposure occurred, combining interesting facts about the vessel with historic importance, as well as mentioning any events on that ship that might have led to a significant asbestos exposure for its crew. Our ship of the month for November is the USS Ranger (CV-4), one of our nation's greatest aircraft carriers that ever roamed the oceans. 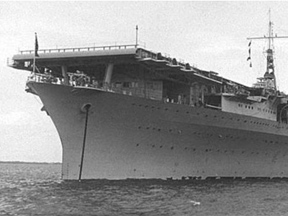 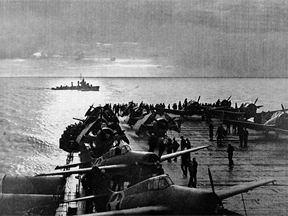 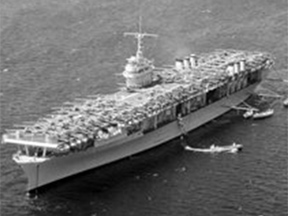 Named to commemorate 5 US warships which were previously named "Ranger", CV-4 was the first US warship designed and built from the keel up as an aircraft carrier. Secretary of the Navy Charles F. Adams assigned the name on December 10, 1930. The ship was sponsored by Mrs. Lou Henry Hoover, wife of Herbert Hoover, the outgoing President of the United States. She smashed a bottle of Prohibition-era grape juice on the bow of the ship, and became the first First Lady to christen an aircraft carrier. The carrier cost 15.2 million dollars.

After Lexington and Saratoga, 69,000 tons remained for construction of aircraft carriers. As a follow-on to the small Langley and the larger Lexington and Saratoga, in 1925 work began on the design of a 4th aircraft carrier for the US Navy. It was decided that the new ship would displace 13,800 tons, a size that would allow 5 carriers to be built in the remaining available tonnage.

Ranger was armed with 6 40 mm quadruple mounts and 46 20 mm mounts, and 8 5-inch (127 mm)/25 caliber guns, which were removed in June 1944. It was one of the first US Navy ships mounted with light automatic weapons to defend against dive-bombing attacks, and was initially armed with 40 .50 cal machine guns.

The Largest and Most Important Carrier in the Atlantic

After her initial trials in the South Atlantic, the ship was assigned to NS Norfolk in October 1934. Ranger lived up to her name during her time on the west coast, sailing from Alaska for the Navy's first cold weather trials, to Hawaii for battle exercises and as far south as Peru. In January 1939, Ranger was sent to Guantanamo Bay for winter fleet operation in the Caribbean and returned to Norfolk in the spring.

Ranger was assigned to Neutrality Patrol operations in September 1939 when the war started in Europe, monitoring the waters from Bermuda to Newfoundland. The ship remained there on duty until December 1941, when the Japanese attacked Pearl Harbor.

In 1942, the ship underwent upgrades and refits. Its first task was the transport of 140 Army Air Force Curtiss P-40 fighters to bases in West Africa for the invasion of Axis-held North Africa (Operation Torch). Throughout the fall of 1942, Ranger provided aerial support for the initial invasion of Morocco, launching nearly 500 aerial missions in 3 days.

Another 3-month maintenance period was spent in Norfolk, followed by another run to North Africa. Ranger returned to her routine patrols along the east coast and later joined the vessels of the Royal Navy in August 1943 in an operation to destroy a German naval base located in Norway. In December 1943, she returned to the US and was assigned to naval aviation training duties out of Quonset Point, Rhode Island.

The ship was transferred to San Diego after a mission to deliver new P-38 fighters to North Africa and refits up until July 1944. There she was used as a training platform for Naval and Marine pilots. After World War II ended, Ranger returned to Norfolk. She underwent a final overhaul at the Philadelphia Naval Shipyard, and spent her final months on routine patrol along the Atlantic seaboard, being decommissioned in October 1946.

The use of asbestos was particularly heavy on carriers such as the Ranger. High exposure areas were the engine rooms, steam turbines, and oil tanks. Regular refits and upgrades were necessary throughout the ship, and these became even more frequent and extensive during wartime. Overhauls, as well as undergoing reinforcements of the flight deck and other upgrades, have exposed many shipyard workers to dangerous levels of asbestos, in the form of dust and airborne fibers. When microscopic fibers are inhaled or ingested, they get lodged into the mesothelial lining and sometimes the stomach, causing scar tissue in the case of pleural plaques, and cellular damage in the case of mesothelioma cancer.

The ship's last overhaul at the Philadelphia Naval Shipyard starting in mid-November 1945. She was decommissioned a year later and sold to the Sun Shipbuilding and Drydock Company of Chester, Pennsylvania for scrapping in January 1947.

If you or a family member has contracted asbestosis, peritoneal or pleural mesothelioma, or any other asbestos-related disease after serving on the Ranger, you should seek the help of a professional lawyer, who can help you recover compensation for your injuries.

Have You Been Exposed to Asbestos in a Shipyard or on the USS Ranger (CV-4)?

If you are a veteran and have worked in the US Navy aboard the USS Ranger, you might have been exposed to dangerous levels of asbestos. Our website is designed to help veterans and all individuals see if their ship or shipyard posed a threat to them. Call us at 760.621.6147 for assistance!