Most Dangerous Workplaces on a Ship

Naval yard workers and sailors are among those who are at higher risk of developing certain kinds of respiratory diseases from exposure to asbestos. This toxic mineral was actively used in building a large number of US Navy ships, even though it was known as hazardous since the 1920s. The manufacturers of asbestos products were aware of the fact that asbestos was highly dangerous before it was used on ships. However, they failed to warn naval yard workers and sailors of the health hazards they were facing.

Unfortunately, the shipbuilding and repair industry has employed many thousands of workers over the years, many of them currently being at risk of developing mesothelioma and other asbestos-exposure related disease, as these usually have a 20-50 year latency period in which the victim does not show any symptoms of sickness. Exposure to asbestos is the only known cause of mesothelioma, a deadly cancer of the lining of the lung.

According to the US Department of Veterans Affairs, millions of people working in naval shipyards across the country during World War II and the decades afterward were exposed to amosite, crocidolite and chrysotile asbestos, which were extensively used in ship construction. Civilian shipyard workers were exposed during the building and maintenance or repair works on Navy ships.

Asbestos was added in a variety of materials that were used for construction of Navy ships until the 1980s, such as wrap around steam pipes and as insulation in boiler rooms. For many years, yard workers did not wear masks or respirators when working around asbestos materials, nor other safety equipment designed to minimize exposure. Microscopic asbestos fibers lodged into their lungs for decades, scarring the lung lining and causing mesothelioma. Civilian shipyard workers were sometimes nicknamed "snowbirds" because when they emerged from a ship, they were covered with white asbestos dust.

Equipment on ships, such as boilers, pipes, pumps, valves and turbines were heavily insulated with asbestos, which left workers who served on ships during the 20th century at a high risk of developing mesothelioma. Some sections of a ship posed a higher risk of exposure than others and, unfortunately, this toxic mineral was used on most types of vessels making the US Navy fleet, from the smallest ship to the biggest submarine.

Who Was Most at Risk? 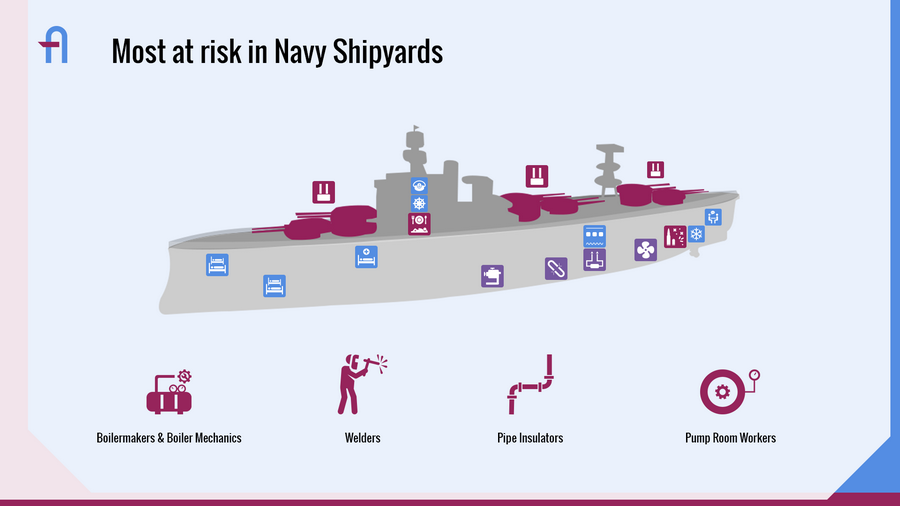 Many veterans have worn aprons or gloves, which contained asbestos, to protect them when working with hot materials. As the aging asbestos fiber was repeatedly exposed to heat, the asbestos-lined safety equipment released carcinogenic fibers. Secondary exposure was also high in their case. For example, a boilermaker may have brought asbestos dust home on their hair, clothing or skin and exposed family members to asbestos.

Welding and hot work often result in smoke, which consists of gases and very fine particles, including asbestos fibers. Many of the industries that employ welders have an elevated incidence of mesothelioma and asbestos-related disease. The Navy was one of these. Welders used asbestos gloves and asbestos blankets, and even some welding rods were coated with a mixture containing 5%-15% asbestos. During the heating of the rod, asbestos fibers were released.

Based on workplace exposure to asbestos, welding was identified among the occupations at high risk of developing mesothelioma, according to a study published several years ago in the American Journal of Industrial Medicine. If you worked as a welder in the 1960s or 1970s, you may only recently have been diagnosed with mesothelioma or asbestos-related disease.

An extensive network of pipes carried steam and cold water throughout the entire ship. The pipes were coated with felt wrapping (which contained 5%-50% asbestos) covered by an outer wrapping of tar that contained asbestos, in order to protect them and keep the steam system perfectly running.

The pipes passed through sleeping quarters and mess halls, so those who spent their time in these spaces were often exposed to asbestos. Another highly dangerous operation that exposed pipe insulators to high levels of asbestos was removing old insulation and replacing it with new wrappings. This implied making a new insulation coating, which was usually done by mixing dry asbestos with water.

Workers who maintained pumps, as well as heating, cooling and bilge systems, were frequently exposed to asbestos when making repairs, coming in contact with the insulation found on the outer surface of pumps, and other internal parts containing this toxic mineral. Also, maintenance work such as replacing worn asbestos gaskets inside pumps frequently released toxic fibers.

Medium risk of exposure was present in the following areas of a ship:

The lowest risk of exposure for sailors was present in the following areas: